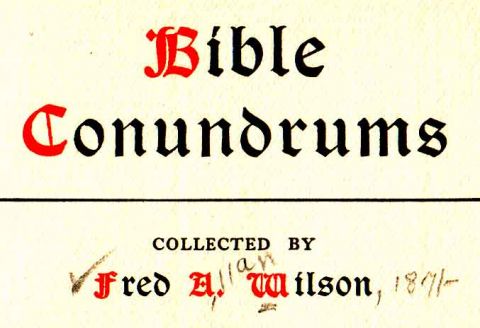 “This little book makes few pretensions which give it a claim upon the attention of a wise and busy world.” If that’s the kind of first sentence that makes you set a book aside, O wise and busy reader, then click away now. But so began a humble little volume by Fred A. Wilson (b. 1871) back in 1901. The book was Bible Conundrums (Boston: L.C. Page). It’s about 110 pages long, with a lot of blank space on every page. Every page has two colors of ink, red and black,and it has a striking red cover.

O wise and busy blog reader, I will save you the time of searching out this rare and precious little volume, and instead I will show you the best and worst of Bible Conundrums. We cannot prove that people laughed at these conundrums lo those many years ago. But we can prove that Fred A. Wilson collected them.

1. From the name of what king of Israel can you take six and leave his father?
A: David.

7. Why did the whale throw up Jonah?
A: Because Jonah wasn’t ready to “die jest yet.”

9. What pastry cook is mentioned in the Bible?
A: Paul –he went to Philippi (fill a pie).

10. Who was the greatest financier of those times?
A: Noah –he floated his stock when all the world was in liquidation.

12. Why were the gates of Eden shut after Adam and Eve went out?
A: To keep the dam(p) air out.

19. How did Jonah feel when the whale swallowed him?
A: Down in the mouth –as if he was going to blubber. 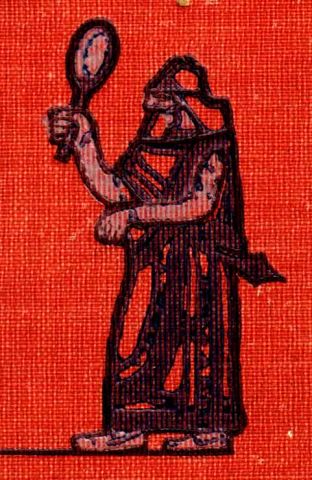 20. Who was the straightest man in the Bible?
A: Joseph –for Pharoah made a ruler of him.

23. Was Eve high or low church?
A: Adam thought her Eve-angelical.

24. Why may we suppose that Noah had beer in the ark?
A: Because the kangaroo went in with hops and the bear was always brewin’ (bruin).

32. In what respect did the cats resemble Noah?
A: They went forty days and forty nights without e’er a rat (Ararat)

40. What noblemen are mentioned in the Bible?
A: The Baron Fig Tree and Lord How Long.

43. What did the children of Israel find to eat in the desert?
A. Sand which is (sandwiches) there.

44. Where did the materials for this food come from?
A: The Sons of Ham were bred and mustered there, and when Lot’s wife was turned into a pillar of salt all butter (but her) went into the desert.

49. What is the difference between Joan of Arc and Noah’s Ark?
A: One was made of wood, the other Maid of Orleans.

50. Why are two young ladies kissing each other obeying a Bible command?
A: They are doing unto others as they would that men would do unto them.

66. Why is a good wife like the devil?
A: While the husbandman sleepeth, she seweth tears (soweth tares)

82. What is the difference between opium and Abraham?
A: One is the juice of poppies and the other is the poppy of the Jews.