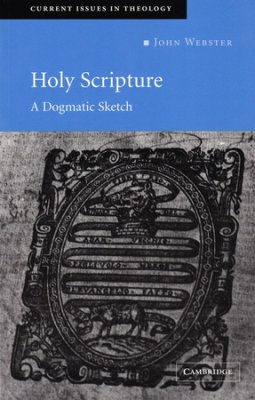 Tucked in at the end of John Webster’s 2003 book Holy Scripture: A Dogmatic Sketch, there’s a 28-page chapter about “Scripture, Theology, and the Theological School.” It’s Webster’s attempt to draw out the conclusions of his bibliology for theological education, and it’s full of stimulating suggestions. He calls this final section a “sketch of the nature of theology and of the theological school and their relation to Holy Scripture,” and he admits that the sketch “is frankly utopian, and may therefore be thought to be irresponsible.”

What’s utopian about the sketch is that it pretends there’s no such thing as the modern fourfold disciplinary arrangement of theological disciplines: Biblical, Historical, Systematic, and Practical. This fourfold division of faculty specialization only dates back to about 1800, but it is so fundamental to how theology schools are planned, perceived, and populated that there’s no way to undertake theological education without it.

So Webster gets help from Zacharius Ursinus, whose 1558 Hortatory Oration to the Study of Divinity is the text on which Webster’s chapter is a gloss. Ursinus describes a threefold movement of instruction, all centered on the audacious notion that Scripture is God’s word and we ought to do theological education as if this is so.

First, there is ‘Catecheticall institution,’ defined as ‘a summary and briefe explication of Christian doctrine.’

Well, that sounds like intro to systematic theology. Okay, so far it fits within our current disciplinary schema.

This is followed by ‘an handling of Common places,’ which is differentiated from ‘institution’ not in terms of its subject matter, but in terms of depth. The study of commonplaces covers the same ground as ‘institution’ and differs only in that it offers ‘a larger explication of every point, and of hard questions together with their definitions, divisions, reasons, and arguments.’

Well, that’s systematic theology again. But more detailed. Maybe we could say it requires some philosophy (“definitions, divisions, reasons”). But I think it also requires some exegesis, to dig down into the hard questions.

Finally, there is ‘the reading and diligent meditation of the Scripture, or holy Writ. And this is the highest degree of the study of Divinity, for which Catechisme and Common places are learned; to wit, that we may come furnished to the reading, understanding, and propounding of the holy Scripture.’

So that would be a hand-off to the biblical studies profs, right? Except it’s hard for moderns to think of systematic theology (survey and th en in-depth) as preparation (“come furnished”) for Bible reading. And this is where it becomes evident that Ursinus is working a different system. Webster says:

Second, Holy Scripture is not simply one concern of theology, but that towards which all studies in divinity move.

Third, the end of studies in divinity is clear: ‘For Catechisme and Common places, as they are taken out of Scripture, and are directed by the Scripture as by their rule; so againe they conduct and lead us as it were by the hand into Scripture.’

It’s all pretty hard to think through.

One of the complications, Webster points out, is that t his conception of theological education has “implications… for the genres of theological writing.” The contrast between pre-modern and modern is blatant:

A good deal of classical Christian theology was written as commentary, paraphrase or reflection upon major texts in the tradition –primarily biblical texts, but also by derivation credal or other writings of sufficient stature and durability to constitute permanently enriching statements of the gospel. Modern theology has largely lost touch with this genre.

One of the primary reasons for the decline of the genre of running paraphrase of or expansion upon classics (biblical or otherwise) is that the genre does not sit easily with the anti-statutory tendency of modernity which has deeply shaped scholarly rhetoric, and which makes these older genres scarcely recognizable as intellectual discourse.

Imagine an intellectual culture in which a really good running commentary was recognized as high-level intellectual discourse. How much would you have to break and re-build to make that possible where you teach and study?

“There is no inevitability about these inherited curricular arrangements and their rationale,” says Webster of the now-regnant fourfold division. “They are not a fate; they are simply contingent dispositions of the matter whose momentum derives partly from their establishment in prestigious places of higher learning, partly from the cultural standing of the model of rational activity which undergirds them.”

As he admits, the sketch is “frankly utopian.” But “utopias may not always be fantasy; they may be an attempt to reach towards the eschatological, and to conceive of the forms which might be taken by convertedness.”

Convertedness as a mark of theological education, built into its very structures. That’s worth pursuing.