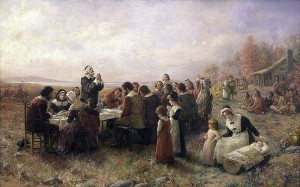 According to St. Benedict of Nursia the Christian life should always be a continuous Lent. According to Sts. Wal-Mart, Target and Starbucks autumn should always be a continuous Christmas. One would have to be truly deaf and blind not to notice that Christmas decorations are put up earlier and earlier each year, and not just in stores but also on city lampposts. Even television commercials are mostly Christmas ones throughout November! There was a day and time when few people, I think, had the audacity to put up Christmas decorations before the Thanksgiving weekend. There was something sacrosanct about Thanksgiving and people did not want Thanksgiving to be swallowed up by Christmas. I recall my first year living in Toronto, Canada during my doctoral studies. Canadian Thanksgiving happens on the second Monday of October (in the U.S. it is Columbus Day), which is quite a bit earlier than American Thanksgiving. I noticed around late October/early November that Christmas decorations started making their appearance. I was stunned at the timing but soon realized that the Canadians did not have a Thanksgiving weekend in November that demarcated the line between the “season before Christmas” and the Christmas season. Nowadays this is a moot point. Apparently November 1 is the new line of demarcation between not Christmas and the Christmas season. Halloween and Christmas have trumped Thanksgiving.

Christians are not exempt from this pre-mature Christmas-ization anymore than the general population. For example, one of my former students the other day posted a picture to Instagram. Actually it was two pictures placed side by side. On the right was a picture of a Starbucks cup, in all of its red Christmas glory. On the left was a screen shot of her iPhone – she was listening to Michael Buble’s rendition of “I’ll be home for Christmas.” The problem? It was only November 8! Now, I am no Scrooge or Grinch when it comes to the Christmas holidays (though I am no Buddy the Elf either). In fact, I like the Christmas season because it means time off from work, time with family and, even in California, cool weather, which gives me an excuse to light the fireplace while reading a good book. What I do wonder, however, is how healthy it is to have a two-month long Christmas season. In other words, what is it doing to our souls?

In all of his wisdom, God gave the Christian Church a season of preparation for Christmas – Advent. Now it is true that many churches choose not to observe Advent but there are still many that at least make use of an Advent wreath. Advent, of course, is much more than simply a wreath with candles. Liturgically speaking it is the beginning of the church year and, most importantly, it is the four weeks before Christmas that we dedicate to meditating on the first and second comings of Jesus Christ. It is a distinctly Christological season. What I fear is that the commercial Advent (beginning on November 1) has displaced the religious Advent and that it has done so even in the life of Christians. Are Christians more prone to follow the lead of culture on this or are they more committed to the Christian tradition’s understanding of Advent and Christmas? My guess is that culture is beating out the church on this one.

I imagine that when my Christian friends and colleagues get excited about Christmas at the beginning of November what they are actually getting excited about is the cultural concept of Christmas: peppermint lattes, twinkle lights and endless renditions of “Rockin’ Around the Christmas Tree.” I doubt if many of them are thinking to themselves, Yes!, two months of reflecting on the first and second comings of  Jesus Christ! Yet, when the Bible speaks of an Advent season it is certainly only thinking about the Christological significance of the coming of Christ. For example,

Now may our God and Father himself, and our Lord Jesus, direct our way to you, and may the Lord make you increase and abound in love for one another and for all, as we do for you, so that he may establish your hearts blameless in holiness before our God and Father, at the coming of our Lord Jesus with all his saints. (1 Thess. 3:11-13); and

But the day of the Lord will come like a thief, and then the heavens will pass away with a roar, and the heavenly bodies will be burned up and dissolved, and the earth and the works that are done on it will be exposed. Since all these things are thus to be dissolved, what sort of people ought you to be in lives of holiness and godliness, waiting for and hastening the coming of the day of God, because of which the heavens will be set on fire and dissolved, and the heavenly bodies will melt as they burn! (2 Peter 3:10-12).

If anything, then, the church does not need to observe the cultural “Christmas season” (which, liturgically speaking, is actually the twelve days after Christmas) but it needs to recover the significance of the Advent season, where the focus is on the Savior of the world, not on shopping, Santa Claus and snickerdoodles. By doing so the church would once again be counter-cultural, something that we are called to be anyway but by doing this we would also be doing the right thing: making Christmas about Christ and not about anything else.

This year December 1 is the First Sunday of Advent. Why not take the opportunity to focus on the significance of the coming of the Son of God in the person of Jesus of Nazareth? Why not spend some time meditating on the gift of the Christ child as the Savior of all humankind? Why not set aside our Christmas-themed lattes and music and instead focus on the love of God for all people and the miracle of the incarnation. This no Scrooge-like sentiment but an appeal to “put the ‘Christ’ back into Christmas” (a trite saying but nonetheless true). Let us celebrate Christmas the way it was meant to be celebrated: in thoughtful remembrance of Jesus’ first coming as a babe in Bethlehem and in eager expectation of his coming again to judge the living and the dead, where his kingdom will have no end. Come, Lord Jesus!