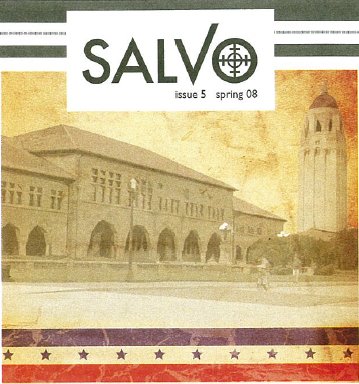 Salvo magazine is all about being feisty, and the latest issue, on education, is no exception. Every article is sure to start a fight of some kind.

Check out, for example, the article “Pick Your Poison,” by Les Sillars and John Basie (it’s not one of the free articles available at the website, so you’ll have to get a hard copy to read it). It’s a Salvo guide to higher education, but it doesn’t aspire to be an all-you-need-to-know guide. If that’s what you’re looking for, my current favorite is ISI’s All-American Colleges: Top Schools for Conservatives, Old-Fashioned Liberals, and People of Faith)

Instead, Sillars and Basie are making the point that a good college has certain identifiable characteristics: It is “academically rigorous, intellectually stimulating, philosophically coherent, respectful of the Western tradition, pro-liberal arts, and sane in terms of campus atmosphere (not rife with drugs, sex, bizarre lifestyles, and the like).” This is what they’re advocating, and they say so as clearly as possible: “We also value genuine intellectual diversity, bounded by rational limits and community standards, for example, a religious college, by its very nature, can and should hire faculty who support the institution’s statements of faith and mission. Further, we value highly a campus ethos that encourages the free exchange of ideas. Feel free to disagree.”

So the schools they highlight are the best illustrations of these virtues (“10 Decent Colleges”) or of the opposite vices (“10 Deplorable Colleges”), arranged by category. I was pleased to see Biola University singled out, and especially that it was chosen as the best illustration of faithfulness to its religious heritage. Here’s the whole Salvo entry:

Faced with a choice between a theologically sound faculty candidate with a lackluster degree and a candidate from Yale with uncertain theology, most religious schools for the past century went for academic respectability. The newcomers, as they rose through the ranks, tended to hire more professors like themselves and, eventually, the college’s religious identity became history.

Biola University (founded as the Bible Institute of Los Angeles in 1908) has declined to make that trade-off, due to a rigorous faculty-screening process that assesses spiritual as well as academic qualifications. This hasn’t hurt Biola’s academic programs. US News & World Report recognizes it as a “national university,” the only member of the Council for Christian Colleges and Universities to earn that rank. Its Torrey Honors Institute combines a Great Books approach with a distinctive classical, Protestant ethos. All graduates complete 30 credits of Bible, theology, and church history (the equivalent of a major in Bible) in addition to the requirements of their majors. More importantly, they “believe that there is truth,” according to Biola’s statement of values, and that “it is knowable and revealed in God’s inerrant Word. As a result we can live with unshakeable confidence and hope knowing that the Bible and God’s truth have direct application to our lives, our work, our relationships and the culture around us.”