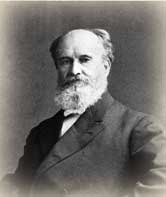 Today (December 15) is the birthday of A. B. Simpson (1843 – 1919), founder of the Christian and Missionary Alliance. Simpson was a remarkable character, one of those late nineteenth century evangelicals whose ministry held together things that seemed to fly apart during the twentieth century. Urban evangelism plus foreign missions; education plus mass outreach; preaching plus social action, and more.

For example, he was not quite an insider and not quite an outsider: He was a mainline Christian committed to ministering in established denominational settings, but he kept on building preaching tabernacles and doing more radical missionary projects until it became inevitable that his work would break through the normal channels available to him. He was a great booster of missions projects, publishing the first missions journal to make use of illustrations.

Simpson was an evangelical Canadian with Presbyterian roots, but his fervency about sanctification made him sound more like somebody from a Holiness background. He was a premillenialist. After he experienced physical healing and saw similar healing in others, he began describing his message as a fourfold gospel: Jesus Christ is savior, sanctifier, healer, and coming king.

Simpson used a vocabulary of expansiveness: his favorite motifs were growth, development, abundance, expansion, unlimited possibility, and enlargement. In his 1890 sermon collection A Larger Christian Life, he sounded these notes continually: The Possibilities of Faith, The Larger Life, More than Conquerors, Grace Abounding, God’s Measureless Measures, and Enlarged Work. It was a great vocabulary for expressing an important spiritual vision. Unfortunately, most of Simpson’s phraseology is nearly unpreachable in our day, because those motifs of have been successfully co-opted by health-and-wealth teacher, positive thinking pitchmen, and the propagators of the so-called prosperity so-called gospel. But if you can hear Simpson in his own context, you can hear all that language of expansiveness and enlargement applied to life in Christ. (If we needed extra reasons to hate prosperity teaching, this would be one: It has retroactively rendered some of the greatest preaching of the nineteenth century unintelligible.)

A. W. Tozer picked up on this central theme of Simpson’s message when he wrote his strange little 1943 biography of Simpson entitled Wingspread: A Study in Spiritual Altitude. It is as odd a book, and as emotionally stirring, as you would expect if you try to imagine a Simpson biography by Tozer. The chapter about Simpson’s preaching and hymn-writing is called “He Dances Before the Ark,” and the next-to-last chapter is called “Hallelujah! I’m Tired.”

In that hymn chapter, Tozer says that

Simple truth requires us to state that A. B. Simpson does not rate high as a writer of hymns. The effort on the part of some of his admirers to place him along with Watts and Wesley is simply absurd. …His poetry lacked literary finish. The central idea might be poetic, but his craftsmanship was not equal to the task of expressing it. His singing heart sometimes betrayed him into attempting to sing things that simply were not lyrical and could not be sung. The virtue of brevity was also lacking in most of his songs. He sometimes rambled on into eight and ten verses… With few exceptions his songs are simply sermons in verse… A few of his compositions can be sung, but the most of them can be negotiated by none except trained singers… There can be no doubt about it, Mr. Simpson wrote too much poetry, or at least too much of it has been published. (p. 118)

Ouch! But Tozer goes on: “After saying all this I would yet confess that hardly a day goes by that I do not kneel and sing, in a shaky baritone comfortably off key, the songs of Simpson. They feed my heart and express my longings, and I can find no other’s songs that do this in as full a measure.” Tozer says only three Simpson songs ever “attained to anything like wide popularity,” and only about a dozen of the hundreds he published were ever sung outside of Christian and Missionary Alliance gatherings.

Yet it is my sober judgment that Simpson has put into a few of his songs more of awful longing, of tender love, of radiant trust, of hope and worship and triumph than can be found in all the popular gospel songs of the last hundred years put together. Those songs are simply not to be compared with his. Simpson’s songs savor of the holy of holies, the outstretched wings of the cherubim and the Shekinah glory. The others speak of the outer courts and the milling crowd.

Here are two verses from one of Simpson’s most famous hymns:

Once ’twas painful trying, now ’tis perfect trust;
Once a half salvation, now the uttermost!
Once ’twas ceaseless holding, now He holds me fast;
Once ’twas constant drifting, now my anchor’s cast.