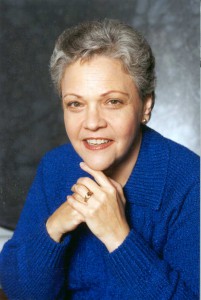 This past weekend (on May 13), the hispanic feminist liberation theologian Ada Maria Isasi-Diaz died. Is “hispanic feminist liberation theologian” too much of a mouthful? She thought so, too. Each of those adjectives is accurate as a description of her work, but all strung together like that, they sounded like a tangle of disparate threads. So she coined a single term to name her single project: mujerista theology.

Isasi-Diaz was certainly committed to the liberationist mode of doing theology. Her basic commitments were all located in that liberal theological family that includes feminist theology, Latin American liberation theology, Black theology, and other such movements. But Isasi-Diaz was wary about situating her work in what she saw as the overly-cozy academic confines of feminist theology. It seemed to her that white feminists just never got around to addressing the concerns that were characteristic of the experience of hispanic women. Black feminists had made a similar observation not long before, and had coined the term “womanist” to distinguish their issues from white feminist issues. Isasi-Diaz followed suit, coining “mujerista theology” to signal a different, and more complex, set of issues for her theological project.

With her mujerista theology, Isasi-Diaz wasn’t just playing the “more victimized than thou” card, adding a layer of race and ethnicity to the feminist project. Isasi-Diaz had thought through her Cuban origins and her American context, and had a burning desire to get the theological voice of hispanic women heard. As a result, she brought a few new and interesting things to the theological table.

First, methodologically: Isasi-Diaz incorporated some ethnography and field research into her theological work. She interviewed hispanic women and incorporated their statements directly into her published work. She went out of her way to include their arguments and their own terminology even when she disagreed with them. She positioned herself as an organic intellectual, an academically trained member of her ethnic and religious community, whose task was to make the voices of hispanic women present in theological discussion. There is a fine line between speaking for a community and speaking from a community. When you anoint and appoint yourself a spokesman for a community, you’ve got a long leash and a lot of privilege. “Speaking as a woman, bla bla bla.” But Isasi-Diaz tried to keep herself accountable to the religious experience of hispanic women in such a way that she spoke, not instead of or even on behalf of them, but as one of them who had gone to get a PhD, and who brought their own words into the discussion.

Second, stylistically: There’s Spanish, spanglish, and who knows what all over her writings. I found a recipe for Puerto Rican pasteles in one of her footnotes!  Her best book, En la Lucha, is an English book with a Spanish title, and it includes Spanish chapter summaries throughout. The first few times you encounter these linguistic moves, you think they’re gimmicks. When you realize Isasi-Diaz is never letting up with them, you realize the medium is part of the message. Do the voices of hispanic women need to be heard in theological conversations? Si! (Not sure I got that translation right.)

Much of Ada Maria Isasi-Diaz’s work is, by my conservative evangelical lights, pretty standard liberationist stuff with the attendant weaknesses of that modern movement. Doctrinally thin, it is encrusted with semi-Maraxist jargon about conscientization, the epistemic advantage of the poor, and praxis as the final criterion of truth. Isasi-Diaz was also a Roman Catholic dissident, committed to the ordination of women within the Roman Catholic church and to a structural critique of the magisterium’s power. There’s a pathos, a sense of tragic fate, there that I suppose we Protestants can never quite grasp, and that “cafeteria Catholic” doesn’t really capture.

It’s all about hearing people speak for themselves. This 1989 article from the Christian Century is the best place to get a short, online sample of Isasi-Diaz speaking for herself. Her best book is 1993’s En La Lucha /  In the Struggle: Elaborating a Mujerista Theology.