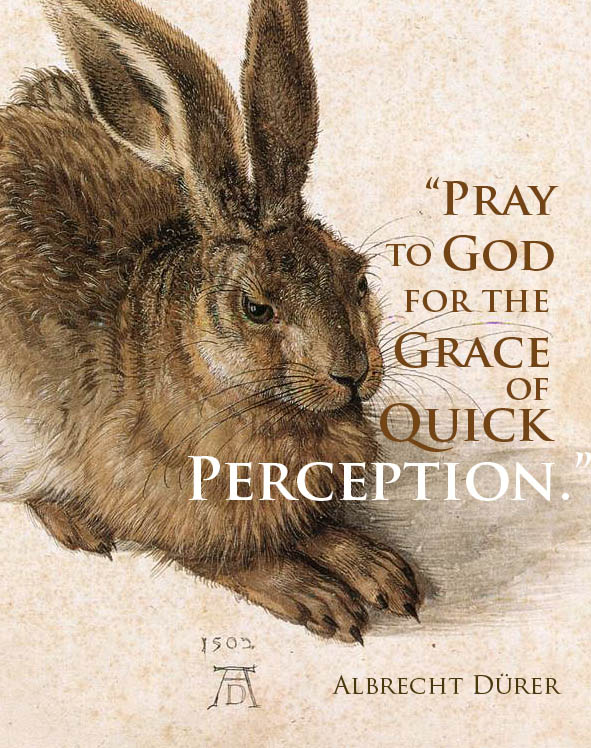 Albrecht Dürer (born 1471, died on this day, April 6, in 1528) was widely hailed as the greatest artist of his generation in the northern Renaissance. All kinds of voluptuous shenanigans were going on in the wonderful world of the southern Renaissance, but if you want that stern, northern sensibility, it’s hard to beat Dürer .

His artistic accomplishment is especially memorable for the range of visual media he mastered. He made enough large paintings to prove he could do it as well as anybody, and the big oil painting has always been the preferred medium for artistic masters. But he also took up the challenge of the print media, from woodcuts to copper engravings. Compared to the richness of oil painting, woodcuts seem strictly limited in their expressive possibilities: the artist is basically restricted to lines and shapes. But Dürer was the kind of artist who responded well to the challenge of limitations, and made the restriction itself into an element of his self-expression. If anybody looked down on the humble woodcut, so useful for mass production and basic communication by craftsmen and printers with no artistic aspirations, Dürer exalted the medium to make it the vehicle of serious artistic intention.

Hundreds of Dürer images can be browsed here.

An 1889 book on Dürer gives a good summary of his views on the Christian vocation to art:

In all his doings Dürer felt himself to be under the directing power of God. He says he will return from Venice “when God helps him home.” He will accomplish a thing “if God will.” The name is lightly used in his earlier years, but later it is introduced within a halo of reverence. “The more we learn,” he somewhere says, “the more closely do we resemble the likeness of God, who knoweth all things.” “From God we receive all things.” ” God is perfect in goodness.” These and the like phrases are of constant occurrence. Many of them are taken from the New Testament, which Dürer studied diligently both in Latin and German translations. He held that the artist’s duty to God was especially great. The youthful apprentice is to be “brought up in the fear of God and taught to pray to God for the grace of quick perception and to honour God.” Great artists he held to be God-inspired. “God only knoweth what is the perfect figure of a man, and he knoweth it likewise to whom He revealeth it.” “God granteth great power to artistic men.” Again, “Painting is a useful art when it is of a godly sort and employed for holy edification. It is useful because God is thereby honoured, when it is seen how He hath bestowed such genius upon one of His creatures, in whom is such art.” The artist must therefore be pure, for “nothing so blunts the understanding as immorality.” He must work as in the sight of God, remembering that “work well done is honouring to Him.” A fine work of art is well-pleasing to God, and He “is angry with such as destroy the works of great mastership, for that is bestowed by God alone.” Such are some of the statements bearing on religion found in Dürer’s writings up to the year 1513.