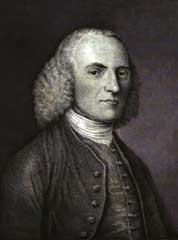 Alexander Cruden was born this day (May 31, 1700) and made his mark in history by producing a concordance of the Bible. Cruden’s Concordance was a revolutionary research tool in its day, as attested by the great excitement with which Jonathan Edwards ordered a copy and put it to use in his own studies.

Though computers have now made exhaustive word searches quick and easy, it may occur to you that indexing every single word of the Bible by hand in the eighteenth century was a bit of a crazy thing to do. More politely, you could say that anybody who would do that would be a person of singular focus and systematic consistency. And that was Alexander Cruden: So focused and detail-oriented that he couldn’t quite fit in to society.

Cruden was, in fact, rather infamous as a weird person. He was locked up several times in madhouses, and a nineteenth-century book called The Eccentric Mirror lists him among notable oddballs:

Among men of genius he cannot be classed; but in his greatest labors he experienced no fatigue, and the utility of his literary projects will not admit of a dispute. His Concordance was his favorite work ; and it is probable that the attention he bestowed upon it was favorable to the state of his mind, though it could not altogether prevent the return of that phrenzy which gave a certain color to all his actions, and suggested to him those whimsical plans of reformation, and those hopes of superiority, which were equally useless to himself and unprofitable to others.

I’ve written about Cruden elsewhere, but on his birthday let me offer one brief reflection on Cruden and the mysteries of God’s providence. It would be stony-hearted to say that God made Alexander Cruden with a screw loose just so he could index the Bible. Cruden’s mental suffering was considerable, and even the outer edge of insanity was a painful place to live. On the other hand, it would be too weak to say that God found an obsessive-compulsive bookworm and figured out how to make the most of a bad situation. Something richer was going on in the way God met Alexander Cruden in the brokenness of his mental powers, bringing Cruden’s best work out of the very place where he was most disordered.

I pray for healing for my friends who live with various levels of mental illness, eccentricity, or maladjustment. But it’s not as if God is refusing to have a relationship with them until they get better. Cruden found his greatest usefulness, his most satisfying intellectual employment, in the kind of activity that rendered him unable to function normally in social life. God knew him as he was, loved him as he was, and even put him into useful service as he was.