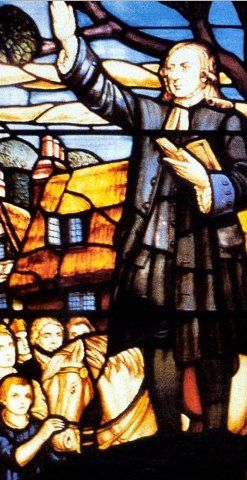 John Wesley (1703â€“1791) launched a religious movement, but he didn’t write a theology. Instead, he preached a lot. His masterpiece is the Standard Sermons, and that’s where you have to look to find out what he was about as a world-changing preacher. Just look at the first paragraph of his first sermon, and you can catch a glimpse of why his ministry changed the course of history.

Sermon number 1 in the Standard Sermons is “Salvation By Faith,” which Wesley preached at St. Mary’s church in Oxford on June 18, 1738. The Scripture text was Ephesians 2:8, “by grace are ye saved through faith.” This was a favorite text of Wesley’s, and he would take up the same text 27 years later as the basis of his most comprehensive sermon, Sermon number 43 on “The Scripture Way of Salvation.”

The first paragraph of Sermon 1 is classic. It is only 140 words long. It was written to be read aloud and to be understood immediately by listeners, clear and accessible, “plain truth for plain people,” as Wesley said in the introduction to the Standard Sermons. But for all its accessibility, it is a carefully-crafted product of a well-trained mind that was steeped in Scripture and the great Christian tradition. It repays close study, so here is a close reading of that first paragraph. First, the paragraph itself:

All the blessings which God hath bestowed upon man are of his mere grace, bounty, or favour; his free, undeserved favour; favour altogether undeserved; man having no claim to the least of his mercies. It was free grace that “formed man of the dust of the ground, and breathed into him a living soul,” and stamped on that soul the image of God, and “put all things under his feet.” The same free grace continues to us, at this day, life, and breath, and all things. For there is nothing we are, or have, or do, which can deserve the least thing at God’s hand. “All our works, Thou, O God, hast wrought in us.” These, therefore, are so many more instances of free mercy: and whatever righteousness may be found in man, this is also the gift of God

The leading idea is the gratuity of grace, which Wesley underlines with a fourfold repetition:

*his mere grace, bounty, or favour; (note: multiplying synonyms)
*his free, undeserved favour; (note: supplying adjectives)
*favour altogether undeserved; (note: intensifying with an absolute adverb)
*man having no claim to the least of his mercies. (note: paraphrasing the main idea)

It’s the classic, Reformation description of grace as God’s unmerited favor. Wesley is going to talk about salvation by faith, so he begins with the Protestant statement about grace. But his next move is to leap back to the doctrine of creation ex nihilo, to make a point about how freely God created: “It was free grace that ‘formed man of the dust of the ground, and breathed into him a living soul,’ (note: Genesis 2:7) and stamped on that soul the image of God (note: Genesis 1:26, but adding the idea that it is specfically the soul that bears God’s image), and “put all things under his feet (note: Psalm 8:6).”

What Wesley is going to tell his audience is that they are saved by sheer grace, but he knows that these lukewarm Anglicans of the eighteenth century might be inclined to disagree. The eighteenth century was quite impressed with human achievements and the potential for progress. So he secures their agreement with a less controversial point: None of us did anything to deserve to be created. When we were nothing, God not only brought us into being, but made us bodies with souls, in God’s own image, and in dominion over the rest of creation.

The grammar of the next sentence needs some updating for our times: When Wesley says, “The same free grace continues to us, at this day, life, and breath, and all things,” he is using the verb “continue” as a transitive verb, meaning “to cause something to endure or extend.” To us, the word sounds more intransitive, so we want to read “grace continues” as “grace keeps coming.” But with a transitive verb, the sentence means “Grace makes these things reach all the way down to us: life, breath, and all things.” The blessings of creation-by-grace are not in some primeval past, but reach all the way down to us, giving us “life, and breath, and all things.”

That little catalog, by the way, is an allusion to Acts 17:25, a passage from Paul’s speech on Mars Hill. The immediate context is Paul’s point that God does not need to receive anything from humanity, least of all religious duties like temple-building and temple-service. On the contrary, God gives what humanity needs. When John Wesley quotes six words from another part of Scripture, he might just be decorating his sentence with the beauty of Bible language. Sometimes he does that. But surprisingly often, his borrowing of a few words is in fact a pointer to real, extended overlap between his current topic and the entire passage he takes the words from. This is one of those cases. In fact, the reason Wesley’s mind reached out to grab the specific words “life, and breath, and all things,” is that he is proclaiming a doctrine taught there in Paul’s speech in Acts. First, he thought of the doctrine, then his mind gravitated toward the key passage, and then his mind returned from Acts carrying a half-dozen words that he used for their poetic force. But he covers his tracks as he returns: He doesn’t cite chapter and verse, he doesn’t signal the theology of the Areopagus speech in any other way. The members of his audience who are fluent in Scripture will know where the words are from, and their minds will be flooded with the associations from Acts. In the terms used by Richard Hays in his book on “echoes of Scripture,” their “canonical memories” will be activated by the allusion. The listeners with less developed canonical memories will miss out on the power of the allusion, but they will still feel the force of the words themselves: “Life, and breath, and all things” is a great little triadic phrase, made of one-syllable words. It just packs a punch, with or without the echoes.

It also sets Wesley up for the most important move in the paragraph, the hinge on which his opening argument turns. He jumps from one triad of monosyllables to another, from “life, and breath, and all things,” to all that “we are, or have, or do.” With the poetic beauty and the momentum of these linked triads, Wesley moves his audience forward from our existence (what we are) through our possessions (what we have) to the main point of a sermon about salvation by faith: our actions (what we do). Under the banner of grace, Wesley brings us to the point of agreeing that just as our existence is by God’s favor, and our possessions are gifts from him, any good actions we perform are also from him. The question to be decided in a discussion about salvation by faith is a question about our works, and Wesley has placed that question in front of his readers in a very artful and effective way.

That is why, having turned the decisive corner of his introduction, he immediately quotes (without citation), a version of Isaiah 26:12: “All our works, Thou, O God, hast wrought in us.” The wording of his quotation differs somewhat from the Authorized Version (KJV) which Wesley usually quotes, and it may be mediated through some liturgical source like the Book of Common Prayer; I haven’t been able to locate this exact wording. Wesley read widely and had a remarkable memory, which makes source-hunting a hard task.

But Isaiah 26:12 is a passage that has been popular in the Christian mystical tradition for a long time, because it gives a glimpse of some mysterious presence of God’s own work in our human works. In a mystic like Meister Eckhart (whose wording of the quotation is, in translation at least, very close to Wesley’s), this concurrence of divine and human works can become all ooey, gooey and mingly, blurring distinctions that ought to be kept clear. But sober souls like the martyr Nicholas Ridley were also fond of using Isaiah’s words here to point to the mystery of our good works proceeding from God. In his commentary on Philippians, expounding the statement that “he who began a good work in you will be faithful to complete it,” Ridley thinks very carefully about the way God’s operatio precedes and makes possible our co-operatio. Whoever Wesley had been reading (and he read too widely for us to be certain of his influences in many cases), his use of Isaiah 26:12, “All our works, O God, thou hast wrought in us,” are aligned with Bishop Ridley’s gospel-centered Anglicanism.

In his explanatory notes on the Bible, Wesley’s comment on Isaiah 26:12 is, “All the good works done by us, are the effects of thy grace.”

To conclude his opening paragraph, Wesley says that all good works are therefore “so many more instances of free mercy,” and summarizes that “whatever righteousness may be found in man, this is also the gift of God.”

This paragraph reflects a comprehensive view of grace. Grace is the basis of man’s physical creation, soulish image-bearing, ongoing preservation, moral action, and righteousness. Grace is both favor and power. We receive it both passively (inoperatively, when we are created from nothing) and actively (cooperatively, when God works in us). In both cases, what draws Wesley’s attention is its gratuity, its freedom. All of it is “free, underserved favour,” “altogether undeserved,” “free grace,” “free mercy,” “gift.” His opening paragraph drives toward a conclusion about human action: It is as much a gift from God as our existence and our possessions. Wesley begins with our creation, in which we had no part, as the clearest instance of “mere grace,” and locates moral action (“our works”) and uprightness (“whatever righteousness”) inside of that framework.

Thus he approaches the teaching about salvation. Wesley’s approach helped launch the great evangelical awakening of the eighteenth century. This was, in fact, a work that God wrought through him.