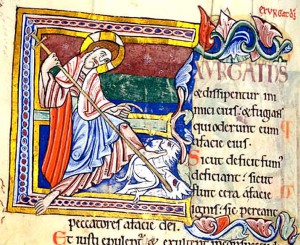 Psalm 68 is not just a run-of-the-mill imprecatory psalm. It combines “smite my enemy” prayers with the “God is a warrior” motif, and the result is a vision of God’s wrath and judgment that sounds more like Beowulf or Conan the Barbarian than any other part of the Bible. I say this advisedly, because back when I was a teen-age consumer of Barbarian sword-and-sorcery stories (and heavy metal music, if this is true confessions time), I recognized some of that imagery in Psalm 68.

When God arises, the wicked will melt like wax or blow away like smoke. When kings rise against him, he smacks them down and they fall like snow. He has at least twenty thousand chariots and is marching a parade of captives out of their own land. He’ll smash the hairy heads of the rebels, as the KJV has it: “God shall wound the head of his enemies, and the hairy scalp of such a one as goeth on still in his trespasses.” Around verse 23 it goes all out: “thy foot may be dipped in the blood of thine enemies, and the tongue of thy dogs in the same.”

The whole idea of justice, retribution, and final judgment is not a problem for me; it’s all over the Bible. What’s unique about Psalm 68 is the way it’s all described in battlefield language from the Ancient Near East. What’s a modern, Western Christian to do with this imagery?

Charles Wesley’s hymn on Psalm 68 answers the question with astonishing grace. He makes the most of the battle imagery, but transposes it to New Covenant terms. And the key figure for him, though he doesn’t mention him by name, is Saul the Persecutor. Listen to how Wesley weaves the conversion of Saul into his brief hymn:

Let God arise, and let His foes
Who fiercely Him and His oppose
Be scattered far away!
Thou, Jesus, on our side appear
And bring Thy great salvation near
And answer, while we pray.

Rebuke their proud tyrannic boast,
Who vaunting against Israel’s host
Do Israel’s God defy;
Thee in Thy people they reproach,
And touching us, presume to touch
The apple of Thine eye.

Who persecute the sons of light,
And kick against the pricks, and fight
Against their Maker-God,
Bow down beneath Thine anger’s weight,
Convince them of their lost estate,
And show them to Thy blood.

No farther let their rage proceed,
Arise, and bruise the serpent’s head,
Who bruises now Thy heel;
Thou know’st Thy feeble followers’ pain,
For Thou dost all our griefs sustain,
And all our sorrows feel.

Wesley is especially taken with the fact that Jesus feels the affliction of his people as personal affront, personal injury. That is a lesson that Saul learned on the Damascus Road, when Jesus (who Saul had not directly persecuted) asked him, “Why do you persecute me?”

Wesley also turns the Psalm’s depiction of the overwhelming wrath of God into a call for conversion. He asks God to set that anger on them like an oppressive heaviness, so that it will show them their situation: “Bow down beneath Thine anger’s weight, Convince them of their lost estate.” And then, in a surprising turn, Wesley brings in the Psalm’s blood imagery. But here on the Damascus road the blood is not for dipping feet or dog-tongues into; it is the blood of Christ: ” And show them to Thy blood.”

There’s much more in the Psalm, of course, and more in Wesley’s use of it. But it doesn’t need glossing, it just needs reading.