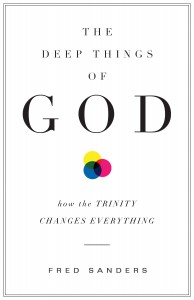 Next week at the annual meeting of the Evangelical Theological Society, four scholars will be presenting papers on my 2010 book The Deep Things of God: How the Trinity Changes Everything. By the way, the book is now only $2.99 on Kindle. I am just thrilled that the book has drawn the attention of four theologians who have taken the time to write constructive and critical responses to it. I genuinely expect to learn a lot as these thinkers springboard off my book to explore the doctrine of the Trinity.

The session happens from 8:30 to 11:40am on Wednesday November 16. The organizer and moderator is Adam Johnson, Assistant Professor of Theology at Cedarville University. Here is the description of the whole session:

Fred Sanders’ recent book, The Deep Things of God, seeks to clarify the way in which the fundamental convictions and practices of the evangelical tradition are essentially trinitarian in nature. In doing so, he seeks to further energize this tradition by making explicit certain (largely) implicit realities. The purpose of this panel will be to engage Fred’s work through four papers focusing on different theological loci developed throughout the book, summing up Fred’s argument and considering the implications of the argument for evangelicals as we seek to grow in both faith and practice.

The first paper is by Jason Sexton, PhD candidate at the University of St. Andrews. It’s entitled “Evangelicalism’s Tacit Trinitarianism and Deep Things’ Tapered Transcendence,” and pushes back a little bit on my historical claims. Here’s a summary:

Reckoning with Sanders’s radical argument that evangelicalism has always been tacitly Trinitarian at its core, while many good examples are given the real test is: will the historians agree? Accordingly, I engage his argument by displaying points where evangelicalism shirks this notion, and instead emphatically highlights other defining features (Scripture, non-separationism, cultural engagement, biblical scholarship, mission/evangelism) when it could have quite easily been more robustly, emphatically Trinitarian and chose not to. If evangelicals are defined by emphasis, as Sanders rightly argues, 20th c. evangelicals have often underemphasized trinitarianism amidst the presence of cults, Unitarians, oneness-only Pentecostals, and robust Trinitarian options from non-evangelical theologians. Thus I will press in on Sanders’s reading, highlighting tensions in this claim central to his argument. Second, my interaction considers the trinitarian model represented in the book, which posits the term-descriptions of Father, Son, Spirit into the eternal divine life, to the exclusion of other viable options for evangelicals, which Sanders seems to concede at a few points, and which his earlier 2005 monograph advocated (p. 190). This again highlights a tension in Sanders’ overall argument which will need to be unpacked in future publications.

The second paper, by Scott Harrower, Assistant Professor of Theology at Melbourne School of Theology, is entitled “The Deep things of God: Relevant and Robust Trinitarianism.” It’s partly based on some field work, using the book in pastoral education:

Fred Sanders’ book is a welcome contribution to Evangelical trinitarianism. Sanders attempts to present both an outline of the doctrine of the Trinity and its significance for Christian living. In this paper I will consider whether Fred’s ambitious work can robustly capture the content of trinitarian thought as well as demonstrating the relevance of this for Christian life and practice. This presentation will reflect on the success or otherwise of Sanders’ work based upon a “live case study.” Sanders’ work will be used as the basic book for teaching parish ministers about the Trinity in Melbourne, Australia. These graduate students require precisely what Sanders set out to offer: relevant and robust Evangelical trinitarianism. In the light of this experience, we shall ask questions such as: Does Sanders achieve his aims? How does this work need to be supplemented? The subtitle to this work – How the Trinity Changes Everything -will be taken as the basis for suggesting areas which Sanders could (further) develop.

The third paper, by Andrew Selby, a PhD student in patristics at Baylor University, is called “Fred Sanders and Aquinas on the Role God’s Blessedness in the Doctrine of the Trinity.”

The second chapter of Fred Sanders’s book sketches the doctrine of the immanent Trinity, discussing God’s life in Himself. Sanders uses this topic as the first step toward the meat of the book, the relationship between salvation and Trinity (“the Trinity is the gospel,” p. 10). His goal in starting here is to correct the evangelical tendency to make practicality the standard for deciding which doctrines are worthy of attention. Sanders rejects the question “What is the doctrine of the Trinity for?” choosing instead to remind his readers that God is perfectly sufficient in Himself apart from creation. But what Sanders takes away with one hand, he gives back with the other. Familiarity with God’s eternal felicity funds the evangelical emphasis on God’s grace: once we recognize God’s utter lack of need, we realize the freeness of His gifts of creation and redemption. Additionally, the doctrine of the immanent Trinity sweeps away unworthy notions of God needing creation to be whole.

This paper will argue that, while devoting attention to God’s blessedness is not unique in the evangelical tradition and the broader history of Christian theology, Sanders’ connection of God’s blessedness with soteriology is singular, and this has positive implications, especially for worship, in evangelical churches. To demonstrate this thesis, I will bring Sanders’ treatment of God’s blessedness into conversation with that of Aquinas. While Sanders draws the similar conclusion with Aquinas that human happiness results from participation in God’s happiness, Sanders departs from Aquinas’ trajectory first by locating the discussion of the eternal Persons within the framework of God’s blessedness and, second, by immediately thereafter discussing the excellence of salvation. The first departure infuses a joy often lacking in the complicated doctrine of the Persons. By means of the second departure, Sanders reminds us of the gratuitousness of salvation offered by a self-sufficient God. The reminder that our blessedness derives from God’s should direct worship back toward the source of our salvation and relocate our subjective experience of that salvation to a subsidiary position.

The fourth and final paper is by Keith L. Johnson, Assistant Professor of Theology at Wheaton College. The title is “Trinity and Salvation in The Deep Things of God,” and it tries to untie or re-tie the knot between those two doctrines:

In the context of an appreciative engagement with Sanders’ The Deep Things of God, I will raise questions about whether a series of interrelated claims he offers early in the book cohere with other claims that he offers later in the book. The goal will be to explore if these potentially conflicting claims point to a tension which, if overcome, can help evangelicals think more clearly and concretely about the relationship between God’s triune life and God’s saving work in Jesus Christ. The first claim is that “behind [God’s] act is his being” (70). Sanders defends this claim as part of his argument that God is utterly distinct from the created order: God would be God without creation, because God’s eternal being is prior to and the foundation for his act of creating the world. The second claim is that, in part due to God’s distinction from the world, we can and should affirm that there are “other things going on” in God’s triune life that are “bigger than you and your salvation” (74). The third claim follows from the first two: “God is Trinity primarily for himself and only secondarily for us” (83).

I will ask whether or not these claims and their stated implications stand in tension with Sanders’ later claims that “God’s intention is for the economy of salvation to teach us who he is” (130) and that, in salvation history, God extends the Trinitarian relationships “in the life of God down into human history” (155). Can we really say that God teaches us “who he is” in the economy of salvation if there are “other things are going on” in God’s life distinct from what God reveals of himself within this economy? And does the existence of these “other things” compromise our trust in the veracity of God’s revelation in salvation history by undermining the claim that God extends the triune relationships into human history? In light of these questions, I will offer a brief alternative account of God’s being and act which attempts to uphold Sanders’ affirmations about God’s relationship with creation while also avoiding this particular tension. The goal will be to suggest an account of the Trinity that coheres closely with God’s self-revelation in the saving work of Jesus Christ.

Of course these are the proposal abstracts that the participants sent in some time ago, and by Wednesday morning their papers may have grown and developed in somewhat different directions. But if you want three hours of close attention to the doctrine of the Trinity, join me at the Appropriating the Deep Things session at ETS this year.