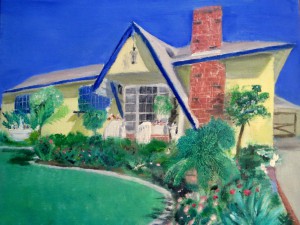 After Jim died, his widow, Teresa, had to leave the house on our street where they had lived for decades. My son Kip made this oil painting of the house for her.

This summer a neighbor of mine died. I had gotten to know Jim and his wife, Teresa, during the last ten years I’ve lived on their street. I had the privilege of offering a tribute at his memorial service. The service was unlike any I’d ever been part of because instead of burying his body, we scattered his ashes in the ocean. This was made possible through The Angel’s Ashes, a ministry for the families of military veterans and homeless people. Knowing that we would be scattering ashes made me reflect on what it means that we are made from the dust of the earth. My reflections on the account of man’s creation in Genesis 2 gave me the theme for Jim’s memorial tribute:

We are here to bring Jim ______’s body to its resting place. We’ve come to the ocean with his ashes. As we say, “Dust to dust and ashes to ashes.” We are reminded that, although God is an eternal spirit, man is made of dust. God formed man out of the dust of the ground and breathed into him the breath of life. It seems that when God made Jim he didn’t use a lot of dust, but he breathed in a lot of life. I know that from knowing how lively Jim was even in his nineties, how often he’d walk the dog down the street to the post office box, and especially how sharp his mind was. The rest of you know that because you’ve been part of his life for years. We all remember his mischievous grin and his sparkling blue eyes.

Before God made man, he made a beautiful world for him to live in, and we see that beautiful world around us on a beautiful day off the coast of southern California. Jim saw a lot of God’s beautiful world in his life. He grew up in the beautiful green hills of Yorkshire, and he loved to recall his bike rides—once even down to the North Sea. He lived on three continents (in England, Iceland, Australia, New Zealand, Canada, and the US).

God didn’t put man just anywhere in the beautiful world but in a garden where he would work as a gardener. Anyone who’s been to Jim and Teresa’s house knows that they are gardeners. You can see the care they’ve taken to make their plot of earth beautiful. They decorated their house inside and out, and especially at Halloween, Christmas, and Easter they put up a lot of extra decorations to make the neighborhood a nicer place to live.

But the beautiful garden wasn’t enough. God saw that it wasn’t good for man to be alone. He brought animals for man to name. I got to see the special relationship Jim had with animals when I saw how he loved his little dog, Abbie, and Abbie loved him.

But animals weren’t enough. God made man a companion who was exactly right for him. God gave Adam Eve, and he gave Jim Teresa. Anyone who saw Jim and Teresa together could see at once that in a special way they were made for one another. They were married for almost fifty years. We know that marriage is a gift from God, but in these days it’s worth pointing out that when a couple stays together as long as they both live, that’s a gift that they give to their family and to their community.

There was also in the garden a tree of the knowledge of good and evil, and God warned man that the day that he ate of it he would die. Man did eat the fruit of that tree and we do die and we do know good and evil. Jim and Teresa are from the generation that knew some of the greatest evils we’ve ever seen on earth. He was soldier in World War Two, and he helped to face down that evil. We owe him and his generation a great debt of gratitude for their service and their sacrifice. Jim continued to be fascinated with military history for the rest of his life. He was always telling me about another book of military he’d read. He knew the evil of war, and he knew the courage, the resolve, and the great sacrifice it took to overcome that evil and to preserve our life and liberty.

Jim didn’t just know death and evil as distant realities. His life was touched with death close at home. Living into his nineties, he had to endure the death of many brothers and sisters and dear friends. I remember his grief when he lost his friend Sal a few years ago. And now we’re experiencing the bitterness of death again in the loss of Jim.

If we’re honest with ourselves, we know that our lives aren’t free from evil either. Evil isn’t just something we see in foreign dictators, or violent criminals on the news; it’s something that runs right through each of our own hearts. Death and evil aren’t what God willed for the world; they’re the result of our own disobedience, our sin. The Bible says, “The wages of sin are death.”

“The wages of sin are death” says the Bible, “but the free gift of God is eternal life through our Lord Jesus Christ” (Romans 6:23). There was also in the garden a tree of life. Even though God made man of perishable material, he made a way for man to live forever. The eternal life that God has by his own nature he would impart to man as a gift. Unfortunately because of man’s disobedience, he lost his access to the tree of life. We are alienated from God, and nothing we can do can prevent our bodies from returning to dust. That’s why we’re here today.

But God would not let death have the final word. He sent his son to die for us, to deal with the sin that alienated us from God. Jesus was willing to make the great sacrifice it would take to defeat evil and gain back the life and liberty God intended for us. The Bible says that “God so loved that world that he gave his only begotten son so that whoever believes in him will not perish but have everlasting life” (John 3:16). Through Jesus our sins can be forgiven and we can be reconciled with God and have access to eternal life.

God’s plan is not just that our spirits would live on after death. He promises to resurrect the bodies of those who believe in his son. Jesus said, “This is the will of my Father, that everyone who looks to the Son and believes in him should have eternal life; and I will raise him up at the last day” (John 6:40). When we see a body reduced to ashes and dust, it seems hard to believe that one could be raised up again. But it’s only reasonable to believe that if God made man out of dust to begin with, he could do it again.