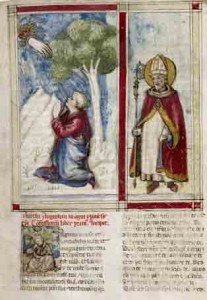 The final paragraph of Augustine’s On True Religion is a tight triple knot, a threefold cord triply cinched to make an amazing rhetorical conclusion about the unity of the Trinity and the threefoldness of salvation.

On True Religion is among Augustine’s early works; one of the last pieces he wrote before becoming a priest. He was baptized in 387 and wrote On True Religion in 390. It’s got some rough edges, and even its trinitarianism is (in my opinion) a little too abstract, formal, and platonic compared to his mature thought, that is, his trinitarian theology after he had really digested the entire gospel of John rather than just its intoxicating opening.

But Augustine is already amazing in this early performance. In particular, as I was reading the conclusion recently, I noticed that he had crafted it very carefully to underline the point of the whole book: that true religion is perfected in the message of the triune God’s saving work, because the truth (okay, Truth) of this message is consubstantial with its essential being. That is, God the Father brings us into direct, saving knowledge of himself through the Son who dwells in us. Here is how he starts the final paragraph:

There’s a lot going on there. And I’m skipping the next several sentences, which are revolutionary for religious epistemology and provocatively universal in their claims about how anybody knows anything about God. Because all I want to do is print the final few sentences, which fold in seven different triads that I decided to tease apart and display in a way I hadn’t seen anybody else do.

Augustine ends the book by rejoicing in the way the Holy Spirit leads us into truth, and says that we should keep and cultivate that divine Gift, the Holy Spirit, who belongs to the unity of the Trinity: 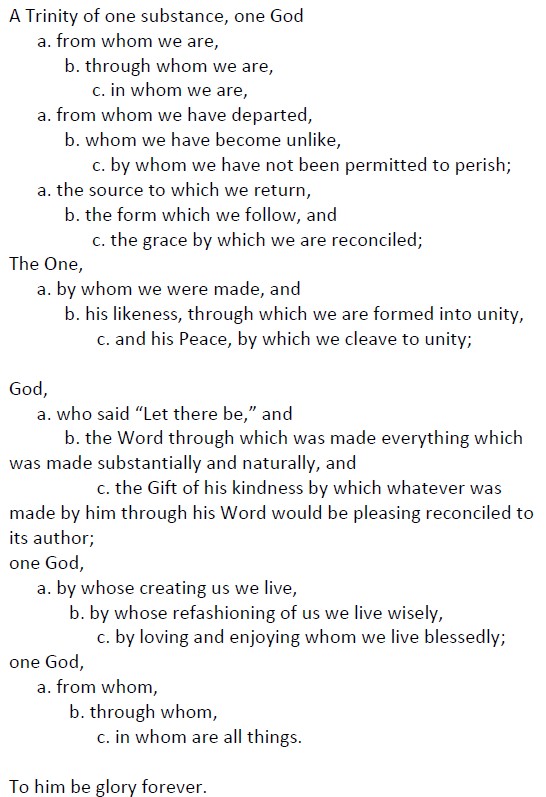 It’s a wonderful passage, underlining, echoing, and recapitulating the preceding argument but also telling and re-telling the story of our creation, fall, and redemption in a series of prepositional triads.

Here’s a pdf of the passsage in parallel to the Latin, from my notes.