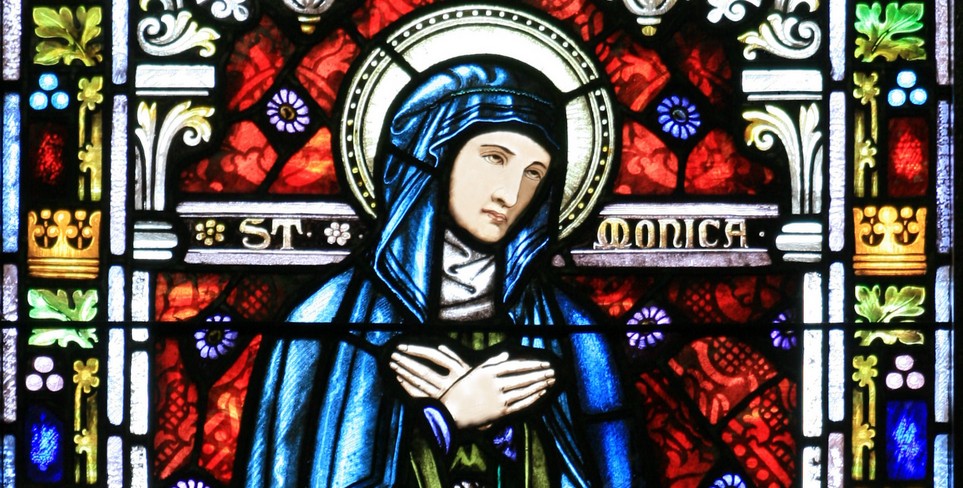 This is the traditional day when Monica is commemorated; Monica the mother of Augustine. Lots of people having praying mothers, but Augustine’s mother was really serious about praying for her son. By the way, Mother’s day is just a few days from now.

Monica has an important role in Augustine’s world-famous autobiographical book The Confessions. In that book, Monica’s character and habits are described at considerable length, and the time just before her death is especially well narrated. The scene in which Augustine and Monica talk about heaven and find themselves mysteriously partaking of that eternal life together is unforgettable.

But a lot of readers miss the symbolic function that Monica plays in The Confessions, and those readers who pick up on it sometimes wonder if they are reading too much into the story. In several important ways, though, Monica is not just Monica. She represents the Christian church for Augustine in The Confessions.

To see why that matters, you’ll probably need to read the book itself, but here is a bit of evidence to hold on to between now and your next reading of The Confessions. In an earlier dialogue, On the Blessed Life from the year 386, Augustine introduces the cast of characters for the story. When he comes to Monica, he declines to give her name, and instead introduces her as “Our mother, to whose merit, in my opinion, I owe everything that I have.”

Near the end of the the dialogue, the philosophical argument is reaching its high point, and “our mother” comes through the room with some milk and cookies for the boys. Augustine is clinching his argument: “This, then, is the full satisfaction of souls, this the happy life: to recognize piously and completely the One through whom you are led into the truth, the nature of the truth you enjoy, and the bond that connects you with the supreme measure. Those three show to the intelligent man the one God, the one Substance excluding the variety of all vain and superstitious images.”

Hearing the number three in a religious context, “our mother” jumps in to the conversation: “Our mother, recalling here those words that still deeply adhered in her memory, awoke to her faith, as it were, and, inflamed with joy, uttered this verse of our priest: ‘Help, O Trinity, those that pray.’ Then she added: ‘Indeed, this is undoubtedly the happy life, that is, the perfect life which we must assume that we can attain soon by a well-founded faith, a joyful hope, and an ardent love.'”

And so, though she doesn’t do much philosophizing, Monica “awoke to her faith” and provides the all-important resolution to the conversation.

Once you’ve noticed how Augustine handles the symbolic force of Monica in one of his earlier, rougher dialogues, you should be prepped to see the more subtle treatment of The Confessions. His praying mother, on one level, is in fact “our mother,” the Christian church that brought him the word of God.