Last week my family got to spend a few days in Yosemite, artfully dodging the summer crowds and hiking as hard as a clan of young not-especially-hikers can. It was great. Along with the Bible and the writings of John Muir, I took along a little Karl Barth: not one of his big half-dome tomes, just the 1962 lectures Evangelical Theology: An Introduction. I suppose I’ve developed a tradition of reading a few pages of Barth in Yosemite over the years.

I can’t recall the details, but I know Karl Barth was a mountain hiker. He always lived in the vicinity of the Swiss Alps, pastored there early in his career, and later vacationed there. If I remember right, his son Matthias died in a climbing accident at age 20.

Whatever its biographical basis in his sense of place, Barth certainly made copious use of the imagery and vocabulary of mountainous terrain throughout his writing. The early Letter to the Romans is full of crags, ravines, crushing weights, vertiginous drops, and distant peaks barely glimpsed, impossible to scale. The later Dogmatics, written in a less expressionist idiom than Romans and less likely to provoke giddiness, nevertheless stretches out to vistas even more stunning. In fact, part of the sometimes-lamented sprawl of the Dogmatics (“more Mahleresque than Mozartean,” quipped one of my teachers) can be accounted for by this comparison with mountain landscapes. The Barth of the Dogmatics can’t get anything done in less than 8 pages, and generally strides out at somewhere around 30 pages. He is less likely to use the imagery directly (“Here we reach the summit of our knowledge” or “we confront a sheer cliff that calls us to a halt”) because he has internalized the metaphor. He is taking the reader along on a patient, spirited hike. Reading the descriptions of doctrine in these big books is a journey, because these are big doctrines 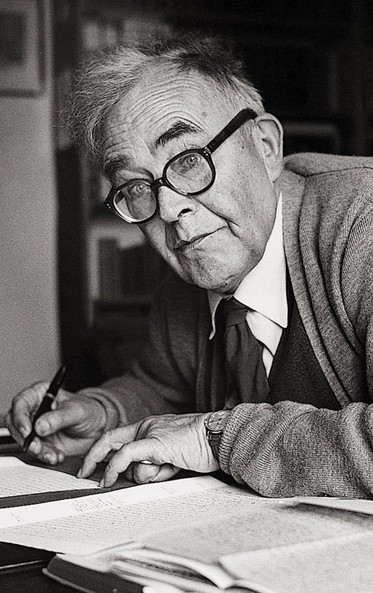 And these big doctrines come from a big Bible, a Bible that had become more and more astonishing to Barth as the decades of teaching went by.

Somewhere in the sixth point of the third chapter of Evangelical Theology, Barth describes what a theologian can expect to find in Holy Scripture. He has just insisted that “the peg on which all theology hangs is acquaintance with the God of the Gospel,” and asserted that God has one simple thing to teach us in his word. But now he cautions that in Scripture we find “an extremely polyphonic, not a monotonous, testimony to the work and word of God.”

Though the Bible is the word of God, the voice we hear in it is differentiated: “not only the voices of the Old and New Testaments as such, but also the many voices that reverberate throughout both.” The voice of Scripture is made up of many voices, and it takes close attention to hear them.

In the study of Scripture, Barth says, “theology can in no way become monolithic, monomanic, monotonous, and infallibly boring.” As it attends to the various witnesses that make up the Scriptural canon, theology “inevitably begins to wander” –note that “wander” is a good word here, since apparently not all theologians who wander are lost– “begins to wander, though always with the same goal in mind.”

It’s this motif of wandering that struck me as appropriately mountainous, appropriate for reading in Yosemite because perhaps it was composed with some sense of the magnitude of the Alps behind it. Theology in the school of the biblical witnesses

migrates from the Old Testament to the New and returns again, from the Yahwist to the priestly codex, from the psalms of David to the proverbs of Solomon, from the Gospel of John to the synoptic gospels, from the Letter to the Galatians to the so-called ‘straw’ epistle of James, and so on continually. Within all of these writings the pilgrimage leads from one level of tradition to another, taking into account every stage of tradition that may be present or surmised. In this respect the work of theology might be compared to the task of circling a high mountain which, although it is one and the same mountain, exists and manifests itself in very different shapes. The eternally rich God is the content of the knowledge of evangelical theology. His unique mystery is known only in the overflowing fullness of his counsels, ways, and judgements.

Theology is analogous to circling one and the same mountain because that single mountain “exists and manifests itself in very different shapes.” Even a relatively modest outcropping like Pothole Dome in the Toulumne Meadows of Yosemite (pictured at the top of this post), easily hikeable in a half hour, nevertheless is something too big to take in, too sprawling to be reduced to any single profile, too complex to be approached from only one angle. And if this is true of little Pothole Dome, what of Half Dome, what of El Capitan?

Barth the mountain hiker knew that it takes time to wander from John to Luke, from Matthew to Paul, from Galatians to James, from Deuteronomy to Hebrews and back again.