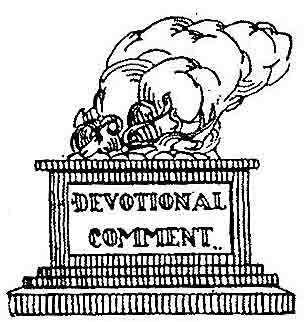 “Let no one despise you for your youth,” Paul told Timothy in the letter we know as First Timothy. “But set the believers an example in speech, in conduct, in love, in faith, in purity.” Paul encouraged Timothy to devote himself to the public reading of scripture, to exhorting, and to teaching, not neglecting his gift. Then, in I Timothy 4:15, Paul summarizes his message of encouragement with these phrases: “Practice these things, immerse yourself in them, so that all may see your progress.”

Whether you know any Greek or not, when translations give this many options, you can be sure something odd is going on in the original language. Every one of these translations communicates the same basic idea, but what image did Paul use? These translations give us a choice among images of immersion, devotion, absorption, self-giving, or self-throwing, not to mention the idea of “all your heart.” And there are plenty of other translations as well, all straining to give the sense of Paul’s exhortation. Squint hard at that verse: what does it say Timothy should do with the ministry of the word? Should I melt into these things, soak in them, give myself to them, focus on them, dissolve into them, heave my heart into them, find my being in them?

My best guess is that any of those things are fine approximations, but all Paul really says is: “Be in these things.” Here are the things of the gospel, and here you are being in them. I suppose we could add, “be intentionally in them” or “don’t be in other things,” or we could underline the being-verb with “be being in these things.”

John Wesley, in his Notes on the New Testament, considered this verse to be an encouragement to meditation, and said that “True meditation is no other than faith, hope, love, joy, melted down together, as it were, by the fire of God’s Holy Spirit; and offered up to God in secret. He that is wholly in these, will be little in worldly company, in other studies, in collecting books, medals, or butterflies: wherein many pastors drone away so considerable a part of their lives.”

The 1871 Jamieson-Fausset-Brown Bible Commentary expands the expression this way: “Literally, ‘BE in these things’; let them engross thee wholly; be wholly absorbed in them. Entire self-dedication, as in other pursuits, so especially in religion, is the secret of proficiency.”

And Charles Simeon, noting that a Quaker friend of his had chosen the three simple Greek words “en toutois isthi,” “be in these things,” as the motto for a book, wrote a letter to him saying,

O that it were written on the hearts of all who make a profession of religion; and so written that their profiting might appear to all men! This is to be ‘men of God.’ Nothing short of this will suffice. Ask those who have profited most in every profession, in every art, and every science, what has led them to their attainments? They will all tell you that they owe their proficiency to this motto.

Be in these things. All the other verbs and explanatory expansions will follow from that.