Do you know the hymn, “Beautiful Isle of Somewhere?” Written by JesÂ­sie B. Pounds in 1897, it was apparently a very popular hymn for funeral services in the early twentieth century. It was sung at President William McKinley’s funeral, for instance. Google it along with words like “funeral” or “burial,” and you’ll find plenty of reminiscences about how people buried their loved ones while singing this song:

And the refrain: “Somewhere, somewhere, Beautiful Isle of Somewhere!” It’s sing-songy enough to make commercial jingles seem elusively evocative, but that’s not the real problem with the hymn –and there is a real problem with this hymn. There are plenty of hymns from those days that sound most at home on a merry-go-round, but they have a certain charm in the way they express the Christian faith in an ostentatiously “Old Time Religion” mode. Even if you find you are personally unable to praise God to the tune of a calliope, surely you can listen sympathetically to a song you know meant so much to your great grandmother. “Beautiful Isle of Somewhere” may score low on the musical richness chart, but it scores high on the grandma-loved-it chart. What really hobbles the hymn, however, is its theological vacuity.

Where? On the beautiful isle of somewhere, that’s where. “Somewhere” must have made people think about transcendence, and it must have done so in helpfully non-specific terms. It’s tempting to say the hymn would be appropriate for a Platonist’s funeral, but Plato had much more specific ideas about the afterlife. For whatever reason, people loved this song.

It became so popular, in fact, that by the 1920s when theological minds took exception to it, churches had a hard time stamping it out. The Roman Catholic church in America earns some points for being the first to denounce it authoritatively. Time Magazine ran a story in October of 1927 about the controversy over the hymn. When the song was composed in the late nineteenth century, the Time writer says, “Voices welling with young love sang it from stoops to hollyhocks and sunflowers nodding in moonlight; voices welling with grief sang it at funeral services. It still draws applause at burlesque shows, and it still can soften the memory of clods plumping down on coffins.”

But in 1927 the Roman Catholic bishop of Boston was demanding that his churches stop singing the “sob-producer” which he supposed was “composed evidently by people who have no faith but plenty of maudlin sentiment.” The song is “vulgar and profane.” The penalty? “Any organist or choir director allowing such a stupid performance in the future will be immediately suspended or discharged.” 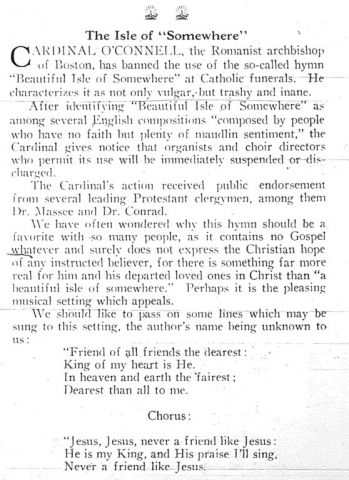 The next month, The Caecilia, a Roman Catholic church music magazine, ran a spirited editorial (online here) arguing that the reason the song was “cheap, trashy, and vulgar” is that it perfectly expressed the attitude of Protestantism: “That plaintive swooping and swooning of the melodic line and the vague sentimentalism of the words” are the very embodiment of “the spirit of interior illumination, of private judgment, of comfort from the Scriptures alone, and of dogmatic indifference…”

But that was probably a cheap shot, because a number of Protestant churches gladly followed the Catholic bishop’s lead and denounced the hymn. The magazine of the Bible Institute of Los Angeles, the King’s Business, ran an editorial noting that “several leading Protestant clergymen, among them Dr. Massee and Dr. Conrad,” had publicly endorsed the condemnation. And the editors of the King’s Biz went on to say,

We have often wondered why this hymn should be a favorite with so many people, as it contains no Gospel whatever and surely does not express the Christian hope of any instructed believer, for there is something far more real for him and h is departed loved ones in Christ than ‘a beautiful isle of somewhere.’

The King’s Business goes on to note “Perhaps it is the pleasing musical setting which appeals,” and then prints some recommended new lyrics which can be sung to the popular tune.

The song is mostly forgotten now. Was it the heavy hand of official condemnation that drove it out? Was it the consensus of numerous leading clergymen? Did it just fade away as musical tastes changed? And where do bad songs go when they die out of popular usage?