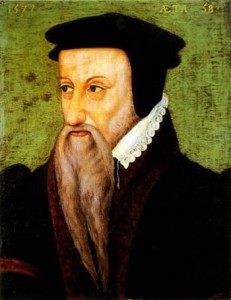 Not long ago, theology fans celebrated Calvin’s 500th birthday. But let us not overlook the birthday of Theodore Beza, born this day, June 24, 1519. Sure, a 490th anniversary isn’t as festive as a 500th, and Beza’s not Calvin. But since it’s his day, consider Beza for a moment.

Beza carried out what John Calvin started in the city of Geneva, taking over as head pastor and head of the academy. He was only ten years younger than Calvin, but he outlived Calvin by 40 years (dying in 1605). There are some scholars who have accused Beza of turning Calvin’s biblical theology into a rigid, scholastic exercise in the remorseless logic of predestination. But that view is a minority position, and makes too much of the few places where Beza extends some of Calvin’s ideas. Richard Muller points out that Beza wasn’t even primarily a systematic theologian, and never wrote extended doctrinal works. His “major role in the continuance of Reformed theology” was rather as a “teacher, exegete, and defender of the faith.” (in Lindberg’s Reformation Theologians, p. 220)

The three most extensive doctrinal works Beza wrote were (1) his personal confession of faith, an instant classic of Protestant thought (more on this below), (2) his Summary of the Whole of Christianity, a chart about predestination with long explanations and scriptural passages, and (3) The Little Book of Christian Questions and Answers, later expanded to the Compendious Catechism.

But Beza’s major impact is not in the way he took over Calvin’s theology; it’s in the way he took over Calvin’s strategy of spreading that theology in Europe. Scott Manetsch’s book Theodore Beza and the Quest for Peace in France, 1572-1598 points out that Calvin died in the middle of a brilliant “program of European-wide Reformed evangelization that he directed from exile in Geneva.” Beza shared with Calvin a sense of being exiled –indeed, Beza probably left behind a more promising future than any other Reformer– and was perfectly suited to understand and carry out Calvin’s strategy for the churches of Europe. “Like Calvin, Theodore Beza viewed himself as a spokesman for Protestants in the diaspora, a reformer of the refugee church.” (p. 2)

Some of the best Reformation scholarship in recent decades has emphasized what an intentionally urban phenomenon it was, and has focused attention on specific cities. In that light, it’s tempting to handle Calvin and Beza as urban reformers with Geneva as their project. But as Manetsch points out, that misses Calvin’s real strategy, and it’s in the work of Beza that the strategy becomes most apparent:

Calvin perceived himself not solely as the minister of a city or territory, but as a pastor of refugees. Stationed in Geneva, Calvin’s vision extended to his native France and beyond to the four corners of Europe. Through the Genevan Academy, and by means of his large correspondence and theological writings, Calvin recruited, trained, and deployed a multi-national company of refugees committed to Reformed theology and strict moral discipline. In the reformer’s hands, the Pauline doctrine of election became a salve intended to comfort and encourage dispossessed wayfarers as they trekked toward a homeland in heaven. This dynamic Reformed vision –which Heiko A. Obermann has labeled the ‘Reformation of the Refugees’ — initiated a new phase of Protestant expansion. While the Peace of Augusburg (1555) largely froze Lutheranism within the territorial boundaries of Germany, Calvin’s program of reform, with Geneva as its command-center, achieved dramatic successes in France and through much of Europe during the middle dcades of the sixteenth century. (p. 3)

Beza’s success with the strategy was the result of several factors: He thought that “all of Europe was his parish,” he carried out a voluminous international correspondence, he traveled and interceded on behalf of persecuted Protestant groups in various places (chiefly the Huguenots, but also the Waldensians), he made Geneva the obvious destination for Protestant refugees during the most troubled times, he preached to those refugees and sent many of them back out when their time came, and he taught for a solid 40 years (1559-1599) in which he was able to train leaders from France, Switzerland, Scotland, and Poland.

Beza may have had the disadvantage of laboring in Calvin’s shadow, but he had the compensating advantage of inheriting an agenda that didn’t have to be re-invented. It just needed to be faithfully, creatively, assiduously carried out in new situations.

The Catholic authorities not only wanted to stop Beza’s influence, they even attempted to (re)convert him. If you’ll pardon the pun, the Pope even gave Beza the ultimate “sales” job, by dispatching no less than Francis de Sales to bring Beza back into the Roman communion. Of course de Sales wasn’t “SAINT Francis de Sales” back then. In fact, he was only about thirty years old when he traveled to Geneva to meet repeatedly with the 70-something Beza. De Sales asked Beza if he didn’t think people could be saved in the Roman Catholic church. Beza answered that a person could be saved in that situation, but “not by means of that multitude of ordinances and ceremonies with which Christ’s teachings had been overlaid.” Surely de Sales vs. Beza in private conversation must have been one of the great (inconclusive) matches in the history of theology.