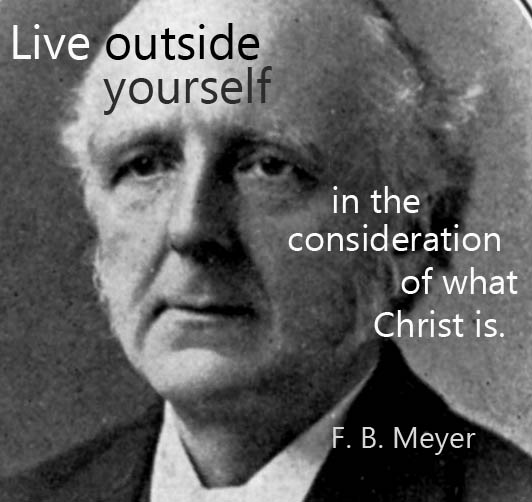 “If I had a hundred lives, they should be at Christ’s disposal,” said F. B. Meyer (born today, April 8, 1847; died 1929), a great Baptist minister who flourished about a century ago. Bob Holman has just published (and I have not yet read) a biography of Meyer, taking that statement as its subtitle: F.B. Meyer: If I Had a Hundred Lives.

Meyer is high on my list of unjustly neglected evangelicals of the late 19th century. He lived with a wholeness that we can hardly imagine in our times: A Baptist with a good education, a romantic attitude to life, a deep spirituality, a firm grasp of ecumenical cooperation, a major commitment to social action, and a zeal for holy living.

Meyer’s great desire was to be useful to God. He knew better than to expect absolute perfection from his own life and heart, but he took jealous care to keep himself consecrated for service.

Knowing this from his biography makes his sermon “A Castaway” more poignant. Taking up the text “lest that by any means, when I have preached to others, I myself should be a castaway,” (1 Cor. 9:27), Meyer broods over the implications. Paul –in danger of being a castaway! Not from salvation, because Meyer knew as well as Paul did that salvation is by grace. But a castaway from useful service, disqualified by personal disobedience. Paul must have meant it when he entertained this fear: “Paul was too eager and too practical a man to dally with a bogy dread.”

Meyer goes on, “May I confess to you that it has become a great dread of my own? And if many days pass, and no one writes to tell me of help derived from my ministry, and no one comes to join our church, and no one seems to be influenced by my life or word I sit myself down and say: “Good God, has the time come at last to me when for some reason I, too, am to be a castaway?”

As was his style, Meyer launched into an extended illustration:

When stylographic pens first came out, I purchased one in the hope that it would serve me perfectly. But I was sadly disappointed. Sometimes when I attempted to use it, it was unwilling to serve me. At other times it was profuse in inking my finger. Finally I discarded it in hopelessness and purchased another pen. The one I now hold serves me perfectly, and I have no difficulty whatever in performing by its means any writing upon which I have set my heart. But I keep the other one. It lies in the drawer of my bureau…

and as was often his style, Meyer put words in the mouth of the inanimate object:

…and often when I am putting my things together to go upon some journey, I think I hear it saying to itself as it lies there: “Ah, he is going away without me again ! There was a time when he never left home without taking me with him ; he never wrote a letter without me; he never composed an article but that I first knew its contents ; but for these many days and months I have been lying here unused.”

“That disused stylographic pen,” says Meyer, “is my conception of what Paul meant when he said he feared being a castaway.”

Was it morbid of Meyer to fear that Christ would someday say to him: “Thou hast served Me well, but thou shalt serve Me no more. Of late thou hast become indolent, and choked with pride, and I have not secured thy whole obedience. I am now compelled to call upon some soul more alert, more obedient than thee; and that man I will use to do the work that thou mightest have done, but which thou didst fail to accomplish.”

In posing this question for himself and his congregation, Meyer was alert to the possibility of morbid self-condemnation. But he took that risk because he didn’t want to let himself or his people side-step the searching challenge of this text.

Christ has no further purpose for me! I am too clumsy, too obtuse, too disobedient, too full of myself, too much out of touch with Him! And so I am to be put on the shelf!” Like those great stones in the quarry at Baalbecâ€”almost completely quarried, but yet the temple was finished without them! May not this question go through the audience : ” Am I a castaway ? I belong to Christ, and when I die I believe I will go home to Him. I know that He has saved me by His precious blood; but has He ceased to use me?”

Meyer himself, though not perfect, was indeed preserved by God to a ripe old age of active service and obedience. And the way God kept him was through the tough ministry of this constant companion, the fear of being a castaway.