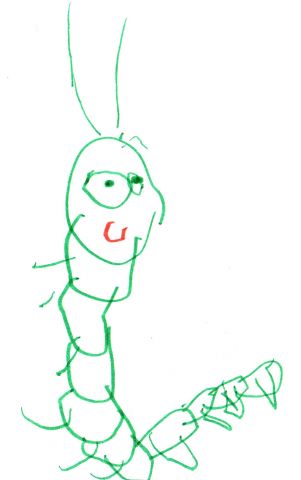 Sphere upon sphere, the caterpillar rises up into the air, gesticulating with its countless leg/arms. One eye is quite round and quite large, pushing the other eye aside and squashing it to an ellipse. The artist, Phoebe Age Four, selects a bright shade of green for the image, and punctuates it with one carefully-deployed red line. If you want to see this artist’s personal style at its most apparent, attend to the antennae. They trace confident curves upward from the caterpillar’s head, snapping into true verticals as they approach the edge of the image. But on closer observation, they are constructed not with a single swooping line, but by little line segments which do their work and stop, do their work and stop, combining to form a single visual swoop. Once you notice this way of working, you can see it being followed throughout the image.

What is he rising up toward, and what is his round eye trained on? Butterflies in the sky. He can fly twice as high. Take a look. But he shouldn’t be in too much of a hurry to make his metamorphosis. After all, as Freddy Age Six opines, “Monarch butterflies are beautiful in every stage of the life cycle.” And so they are.