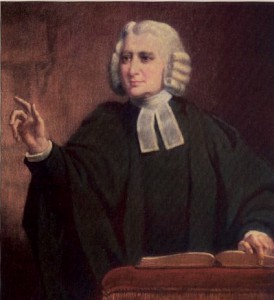 Charles Wesley (born 1707, died March 29, 1788) lived a long and fruitful life, died peacefully at home, and was buried in the yard of his parish church. His family was gathered around him and some of them wrote descriptions of how he died. His death was not really remarkable except that it was such a remarkably Christian way of dying. His attending physician said “He possessed that state of mind which he had been always pleased to see in others– unaffected humility and holy resignation to the will of God. He had no transports of joy, but solid hope and unshaken confidence in Christ, which kept his mind in perfect peace…” He was extremely weak in his final days, but whenever his wife and daughter would ask him if he needed anything, he would reply, “Nothing but Christ.”

As his health declined and he knew he was nearing the end, he set aside an extended time of prayer to make absolutely certain he had forgiven all enemies. He worked meticulously through the mental list of people he had had conflict with, and prayed sincerely for their well-being and salvation. His son Samuel had grieved the whole family deeply by converting from Wesley’s beloved Anglican church to Roman Catholicism (because he thought Protestants didn’t have any good music… Charles Wesley’s son… ouch…). Wesley settled his accounts with the people who had draw his Son Romeward by forgiving them, praying for their prosperity, and leaving everything in God’s hands.

Wesley wrote hymns about everything –earthquakes, the Trinity, sick children, national holidays, the whole Bible, pets, you name it. But in his last sickness he didn’t write much about his mortality. He had, however, written a great deal on the subject earlier in his life. In the course of his pastoral visitations, he had attended a godly woman (Mrs. Elizabeth Hooper) at her death on May 6, 1741. Deeply moved by this, he wrote a hymn on the death of Christian saint. Then he wrote another one, for non-Christians to hear. Then he wrote another one, about Judgment Day. The a couple more. Then one for after the funeral. Actually, he didn’t write all of these at the same time (the last couple are for male deceased), but he gathered them together in his hymn collection after the Hooper hymn; and he certainly could have written that many hymns on one occasion. Charles Wesley was a fountain of praise and biblical wisdom, that rhymed.

They’re better than anything you could say about them, so here’s the whole series, from the Hymns and Sacred Songs collection by the Wesleys:

Come, to the house of mourning come,
The house of serious, solemn joy;
Let us, till all are taken home,
Our lives in songs of praise employ.

Accomplish’d is our sister’s strife,
Her happier soul is gone before,
Her struggle for eternal life,
Her glorious agony, is o’er.

The captive exile is released,
Is with her Lord in paradise,
Of perfect paradise possest,
And waiting for the heavenly prize.

In her no spot of sin remain’d,
To shake her confidence in God;
The victory here she more than gain’d,
Triumphant through her Saviour’s blood.

She now the fight of faith hath fought,
Finish’d and won the Christian race;
She found on earth the Lord she sought,
And now beholds Him face to face.

She died in sure and steadfast hope,
By Jesus wholly sanctified;
Her perfect spirit she gave up,
And sunk into His arms, and died.

Thus may we all our parting breath
Into the Saviour’s hands resign:
O Jesu, let me die her death,
And let her latter end be mine!

Draw near, ye strangers to our God,
And taste with us the heavenly powers;
O that His love were shed abroad!
O that your hearts were all like ours!

Come, see how Christians wail their dead ;
Come, share in our mysterious bliss;
On Satan, sin, and death to tread,
O what an happiness is this!

Though once ye intermeddled not
With the strange madness of our joys,
Ye all may be to Eden brought,
And heighten our triumphant noise.

With tears of joy our eyes o’erflow,
At parting with our dearest friend;
From us we gladly let her go
To pleasures that shall never end.

We know in whom we have believed,
Our faith in Jesus is not vain ;
To all who have their Lord received
To live is Christ, to die is gain.

Our sister’s flesh shall turn to dust,
Her sacred dust in hope shall sleep,
The temple of the Holy Ghost
The still indwelling God shall keep.

Triumphantly she laid it down,
For time to waste, and worms devour ;
In weakness and dishonour sown,
Till raised in glory and in power.

A body natural it lies,
A lifeless lump of mouldering clay;
But spiritual it soon shall rise,
No more to perish or decay.

This corruptible body soon
Shall all incorruptible be,
This mortal quickly, shall put on
Its robes of immortality.

The terrible, all-conquering king
Shall then a final period have :
Say then, O death, where is thy sting?
Where is thy victory, O grave ?

The sting of death, our sin, is gone,
Scatter’d are all our guilty fears;
Thanks be to God, through Christ alone,
Who makes us more than conquerors.

God only doth the victory give ;
He shall our glorious flesh restore,
His many sons to heaven receive,
Where time and death shall be no more.

Let the world lament their dead,
As sorrowing without hope ;
When a friend of ours is freed,
We cheerfully look up,
Cannot murmur or complain,
For our dead we cannot grieve ;
Death to them, to us, is gain ;
In Jesus we believe.

We believe that Christ our Head
For us resign’d His breath,
He was number’d with the dead,
And dying conquer’d death;
Burst the barriers of the tomb ;
Death could Him no longer keep:
He is the Firstfruits become
Of those in Him that sleep.

God, who Him to life restored,
Shall all His members raise,
Bring them quicken’d with their Lord,
The children of His grace.
We who then on earth remain
Shall not sooner be brought home ;
All the dead shall rise again
To meet the general doom.

Jesus, faithful to His word,
Shall with a shout descend;
All heaven’s host their glorious Lord
Shall pompously attend;
Christ shall come with dreadful noise,
Lightnings swift, and thunders loud,
With the great archangel’s voice,
And with the trump of God.

First the dead in Christ shall rise;
Then we who yet remain
Shall be caught up to the skies,
And see our Lord again ;
We shall meet Him in the air,
All wrapt up to heaven shall be, Find, and love, and praise Him there
To all eternity.

Who can tell the happiness
This glorious hope affords !
Joy unutter’d we possess
In these reviving words :
Happy while on earth we breathe,
Mightier bliss ordain’d to know,
Trampling down sin, hell, and death,
To the third heaven we go.

Blessing, honour, thanks, and praise,
Pay we, gracious God, to Thee;
Thou in Thine abundant grace
Givest us the victory :
True and faithful to Thy word,
Thou hast glorified Thy Son;
Jesus Christ, our dying Lord,
He for us the fight hath won.

Lo ! the prisoner is released;
Lighten’d of his fleshly load,
Where the weary are at rest
He is gather’d into God !
Lo ! the pain of life is past,
All his warfare now is o’er,
Death and hell behind are cast,
Grief and suffering are no more.

Yes, the Christian’s course is run,
Ended is the glorious strife,
Fought the fight, the work is done,
Death is swallow’d up of life;
Borne by angels on their wings,
Far from earth the spirit flies,
Finds his God, and sits and sings
Triumphing in paradise.

Join we then with one accord
In the new, the joyful song; Absent from our loving Lord
We shall not continue long :
We shall quit the house of clay,
We a better lot shall share,
We shall see the realms of day,
Meet our happy brother there !

Let the world bewail their dead,
Fondly of their loss complain ;
Brother, friend, by Jesus freed,
Death to thee, to us, is gain ;
Thou art enter’d into joy :
Let the unbelievers mourn,
We in songs our lives employ,
Till we all to God return.

Hark, a voice divides the sky !
Happy are the faithful dead;
In the Lord who sweetly die,
They from all their toils are freed.
Them the Spirit hath declared
Blest, unutterably blest;
Jesus is their great Reward,
Jesus is their endless Rest.

Follow’d by their works they go
Where their Head had gone before,
Reconciled by grace below;
Grace had open’d mercy’s door:
Justified through faith alone,
Here they knew their sins forgiven,
Here they laid their burden down,
Hallow’d, and made fit for heaven.

Who can now lament the lot
Of a saint in Christ deceased ?
Let the world, who know us not,
Call us hopeless and unbless’d :
When from flesh the spirit freed
Hastens homeward to return,
Mortals cry, “A man is dead !”
Angels sing, “A child is born !”

Born into the world above,
They our happy brother greet,
Bear him to the throne of love,
Place him at the Saviour’s feet:
Jesus smiles, and says, “Well done,
Good and faithful servant thou,
Enter and receive Thy crown,
Reign with Me triumphant now.”

Angels catch the’ approving sound,
Bow, and bless the just award,
Hail the heir with glory crown’d,
Now rejoicing with his Lord ; Fuller joys ordain’d to know,
Waiting for the general doom,
When the’ archangel’s trump shall blow,
“Rise, ye dead, to judgment come.”

Come, let us who in Christ believe
With saints and angels join,
Glory, and praise, and blessing give.
And thanks, to Love Divine.

Our friend in sure and certain hope
Hath laid his body down;
He knew that Christ shall raise him up,
And give the starry crown.

To all who His appearing love
He opens paradise;
And we shall join the hosts above,
And we shall grasp the prize.

Then let us wait to see the day,
To hear the joyful word,
To answer, Lo ! we come away,
We die to meet our Lord.