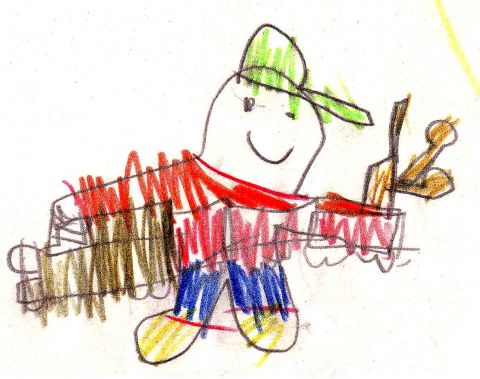 I’m not saying you have to get me a Lionel toy train with a gold engine and red cars and a remote control device with dual speed levers. All I’m saying is, if I had a train like that I would hug it with both arms and have the biggest smile on my face you can imagine. My little feet would do a happy dance and I would pretty much be the perfect image of childlike joy. I would hold it up for the whole wide world to see. I would crane my neck from one end of the train to the other, cap tilted jauntily and smiling all the while. Sometime this summer I’ll be turning seven. That’s just about perfect, isn’t it?

If I had to guess, I would say that it’s pretty likely I would present such an image of innocent youthfulness that you would not only feel affirmed as a parent, but that your own childhood would somehow be taken up into mine and vicariously justified. Your own inability to express your parental love would be transfigured in an instant with this symbolic communication that speaks the pure language of love.

Not that I know much about this kind of thing, but it would probably help the sands of time fall more slowly through the hourglass of your own mortality, just having the perfect iconic memory of this moment of boyhood. Somethin’ transcendent about that, wouldn’t you say? And who can put a price tag on that moment of communion with something beyond time? I mean, golly, you know That Secret Something which all advertising promises but can never deliver? I bet this is the thing that would deliver it. It would at least come close enough that it would stave off the icy breath of your own inevitable impending death indefinitely.

Another thing to bear in mind is that trains are my favorite things in the world, and that this Lionel train with a gold engine is a great train with real live switching action. Here’s a drawing of me holding one. Check it out.