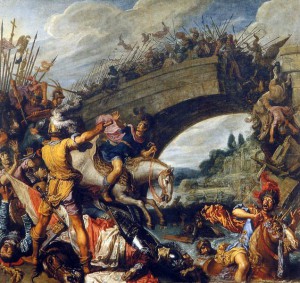 Today (October 28) is the day in the year 312 that Constantine defeated his rival Maxentius at Pons Milvia, the Milvian Bridge outside of Rome. This decisive victory (in which Maxentius himself drowned in the Tiber) put Constantine on the path to consolidating Roman power again into the hands of one emperor, himself. The victory is commemorated by the Arch of Constantine, an important landmark in Rome to this day.

The date is important for Christianity because Constantine went on to end imperial persecution of Christians (with the Edict of Milan in 313). He also converted to Christianity personally, and empowered and enriched the church in countless ways, from copying Bible texts, to gathering the first ecumenical council, to beginning Christian architecture. What’s not to love?

In fact, some fourth-century Christians loved this Christian emperor so much that it’s rather shocking for us to read now. Eusebius of Caesarea was his chief panegyrist. In his Ecclesiastical History, but even more in his Life of Constantine, Eusebius sang the highest praises of Constantine. He thought the rise of Constantine was a miracle, or at least a special providence in answer to the prayers of the church. Eusebius saw the hand of God raising Constantine to the throne.

According to the official version of the story, the battle of the Milvian bridge was something of a miracle. Constantine and his men had a vision of a cross in the sky, and the words “In This Sign, Conquer.” So they did, by the sign of the cross. And according to Eusebius, that victory was a brand new Exodus, in which God vindicated his people, exalted his chosen leader, and cast the horse and chariots of his enemies into the sea. Or the Tiber.

Peter Leithart defends Constantine, and Constantinianism, and Christendom, and just about any other unfashionable concept he can get his hands on, in a 2010 book called Defending Constantine. N.T. Wright, who has been known to murmur the awful word Constantine, says in his endorsement of the book that “Too many people, for far too long, have been able to murmur the awful word Constantine, knowing that the shudder it produces will absolve them from the need to think through how the church and the powers of the world actually relate, let alone construct a coherent historical or theological argument on the subject.” He goes on to praise Leithart’s work because it “challenges all this, and forces us to face the question of what Constantine’s settlement actually was, and meant. Few will agree with everything he says. All will benefit enormously from this challenge to easygoing received ‘wisdom.'”