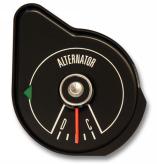 When I learned how to drive a car, my dad made sure to start me out on the most primitive contraption that was street legal. It had a manual transmission, of course, and manual everything else as well: door locks, windows, seat adjustments, and all. You dimmed the headlights by stomping a switch on the floor. The dashboard didn’t feature any red idiot lights to blink at you when there was a problem. Instead, it had about a dozen gauges, including a thermometer with real numbers on it to let you monitor the engine temperature, and an oil pressure indicator instead of just a “check engine” sign. The temperature and pressure gauges traced elegant little narrative arcs as your engine’s oil and water warmed up, and after your engine had reached equilibrium, they still did a subtle little dance that coordinated with the rpms on the tachometer. And then there was the alternator gauge with its nervous, twitchy, little needle that let you know if your battery was charging or discharging at any given moment. It never held still, but it never really went anywhere. It just twitched in the middle. I remember asking my dad what it would mean if that wiggly needle ever moved over to the “discharge” side of the gauge. “It would mean get off the road, you’ve got a problem,” he said. “You’d be expending power without replenishing it, and that can only go on for so long.” You’d have a power deficit.

I’ve been thinking about that twitchy needle recently as a metaphor for Christian spirituality. Surveying the contemporary scene, there are plenty of reasons to be encouraged about the vitality of the churches, and also plenty of reasons to be worried. A revival here, a missed opportunity there; steady progress in one movement and a public image fiasco in another; principled cooperation among believers in one sector, and unnecessary bickering in another; some bad teaching is being named and exposed, while other errors keep undermining Christian confidence. As usual, there are strengths and weaknesses, risings and fallings. The water temperature and the oil pressure are doing their thing, and we’re moving down the road. And to keep the metaphor straight, let’s say the fuel tank itself is taken care of by God, so that our concern is not with the power of internal combustion, but with the wise management of the systems derived from it.

I think the needle to watch right now is that twitchy one that shows whether we’re charging or discharging the battery. We’ve got a lot of resources on tap, and we can expend them for a lot of good purposes, but if we’re only sending out power and never putting any back in, we’re working on borrowed time. In our current cultural setting, we need to ensure that we are generating power instead of just expending it.

Perhaps it’s too depressing, this being 2011, to switch over to financial terms, but here it is: If you’re starting out with a lot of money in the bank, you can spend for a long time on a lot of good things before you notice your overall trend is downward. And if somebody else put that money in the bank for you, it’s especially easy to keep on spending without having realistic notions about where that money came from and what it would take to replenish it.

A lot of what we do as Christians is spend the capital amassed by previous generations of the faithful. Think about the issue of biblical literacy: We have Bibles in our own language, and patterns of devotional life that were put in place by our forebears. The chapters and verses that make Bible navigation easy were invented by very clever believers who wanted to be able to find their way around in the Bible rapidly and precisely. A system of brilliant cross-references naturally developed from that. Concordances followed.

Or think about Bible memorization: Of the Bible verses you know by heart, how many of them were put into your mind by hymns and songs? Did you know that the classic, English-language hymn that puts Biblical language into verse form was an invention of a previous generation that was thinking creatively about how to get Scripture into the minds and hearts of Christians?

Our generation doesn’t need to reinvent the wheel. But have we added anything as good as verses or hymns to the stock of Christian tools? Are we drawing on the resources of previous generations without replenishing? I actually think there are some new and promising things being done in recent decades, which future generations, if the Lord tarries, will look back on and say, “This thing we all do now and take for granted? It was the invention of wise believers in the early twenty-first century.”

It seems to me there are three levels of engagement to monitor.

At the personal level: Are you making progress in your knowledge of God through Holy Scripture in an ongoing way? Or are you drawing from what you learned years ago, perhaps in childhood or in the years immediately following your conversion, about God’s character? Are more and more stretches of Scripture becoming familiar territory to you? Or are more and more Bible verses fading into vague recollection as you get older? Speaking for myself, every time I quote a passage from memory and it comes out in King James English, I think, “Uh oh. I haven’t studied or memorized in the King James Bible since 1987. That should have been over-written in more recent years.” There are legitimate seasons of storing up and giving out in our Christian lives, but they ought to be short cycles. Ancient Christian wisdom suggests there is a kind of daily cycle (devotions!), a weekly one (Sunday at last!), and an annual one (Christ is risen!). If you’re spending resources you stored up in a previous decade, you have an unsustainable deficit spirituality.

At the level of church culture: Can we talk to each other in our churches using language that sounds alive even if it’s ancient, or are we wandering around re-hashing terms that come to us from some middle zone that has stopped making sense? When the preacher preaches, is he only drawing on deep memories of a time when Biblical language made sense to our grandparents, or is he building the foundations that our own grandchildren will look back to? This week my pastor preached on the Isaiah text that includes references to Beulah and to Zion. He nicely split the difference between old and new, calling us to remember a time when people named their daughters Beulah and sang songs about going to Zion, and delivering a powerful sermon about Beulah and Zion right now, a sermon that will no doubt be the first meaningful encounter with those Biblical images for a whole generation of hearers.

At the level of influencing the wider culture: Are we sowing into the culture or just expecting to reap from what previous generations have sown? A hundred years ago, evangelists like R.A. Torrey could put up a banner that said “Get Right With God,” and his audience immediately knew what he had in mind. They were coming from a churched, Christian-influenced national culture that at least let them know what they were in rebellion against. The nineteenth century had sown Biblical teaching, and Torrey could harvest it. Torrey in turn sowed into the culture by traveling around the world teaching, preaching, and writing, and also by training believers at the Bible Institute of Los Angeles. The generations after him reaped what he sowed, and we continue to do so. But are we sowing into the culture the influences that can be reaped by future generations? (The classic book in this regard is Tim Downs’ 1999 Finding Common Ground, still relevant to our situation).

I don’t think Christians are losing ground in all these areas. It’s possible to point out ways in which we are making progress and trying new things. In visionary mode, I could enthuse about the promise of new musical forms (holy hip hop can write Scripture on young hearts in ways I’m not sure anybody has previously imagined), new media gadgets (if you follow the right people on Twitter you have a steady stream of encouragement and rebuke flowing into your mind from brothers and sisters in Christ), and new social movements (church planting, adoption ministries, resource sharing). There are signs of hope all around, and plenty of opportunity to make the most of a fast-changing situation.

But there is also the very real risk of running a deficit spirituality, and of spending away what has been put into our accounts by those who have gone before, without even noticing that we’re doing it. If we find ourselves in that situation, we need to get off the road and get things fixed. If we’re discharging power, trending and spending downward, then even revivals will turn out to be small upward spikes on an arrow that is on an overall down trajectory.