There’s a nice little book on the Trinity coming out soon, and I highly recommend it as a zippy intro to my favorite subject. The book is Delighting in the Trinity, by Michael Reeves, and here’s what I already said about it as a back-cover blurb:

If you have ever felt that the doctrine of the Trinity was a liability, a burden to be borne patiently, this is the book that will change your perspective. Michael Reeves’s Delighting in the Trinity presents the triune God as the best thing about the Christian faith. Convinced that ‘the triunity of God is the secret of his beauty,’ Reeves writes from a full heart, with contagious enthusiasm for the Trinity. Delighting in the Trinity is more stimulating, quotable and engaging than we usually expect a theology book to be. Page after page, Reeves finds new ways of talking, draws surprising connections and reminds us that the God of the gospel is good news in three persons. 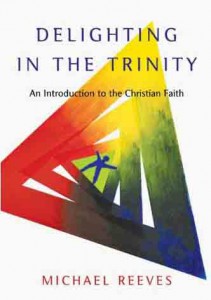 That’s my blurb and I’m sticking to it. In fact, I enjoyed reading the book so much that I wanted to say a little more about it here, mainly to pass along some of my favorite quotes.

The book has already been out for a while in the UK, under the title The Good God, and even in its American translation you’ll hear a bit of an accent. Michael Reeves is the theological adviser for the UCCF (Universities and Colleges Christian Fellowship) in the UK, and also oversees the Theology Network site. But Delighting in the Trinity has made the jump well, and I think people will like it. “Delight” is a good word to work into the title, because Reeves is obviously enjoying his job of teaching about the Trinity.

Not long ago, every intro-to-the-Trinity book had to promise that it was going to be practical and life-changing. But Reeves is one of the teachers who has gotten the message that the doctrine of the Trinity doesn’t have to prove itself practical before proving itself important. As Reeves says, “Christianity is not primarily about lifestyle change; it is about knowing God. To know and grow to enjoy him is what we are saved for – and that is what we are going to press into here.”

Of course there is a goal to this instruction, and Reeves never skimps on practical application. He just thinks good theology is what will bring about a good life: “Knowing the love of God is the very thing that makes us loving.” “Knowing the Trinity” is central to “Knowing God,” which means that when we do trinitarian theology “we are doing what in Psalm 27 David said he could do all the days of his life: we are gazing upon the beauty of the Lord.”

Reeves gently spoofs the kind of approach to the doctrine that gets tangled up in analogies. So you’ve found a neat analogy for three-in-one, he says: Who cares?

Whether the Trinity is compared to shrubbery, streaky bacon, the three states of H2O, or a three-headed giant, it begins to sound, well, bizarre, like some pointless and unsightly growth on our understanding of God, one that could surely be lopped off with no consequence other than a universal sigh of relief. … How could the eggishness of God ever be more than a weird curiosity?

He’s not just being mean to Sunday school teachers here; he is really jealous to keep this doctrine from becoming an oddity, or an inert bit of theological correctness:

We explain that the Father is not the Son, the Spirit is not the Father, there are not three gods and so on. All of which is true, but it can leave one with the hollow sense that one has successfully avoided all sorts of nasty-sounding heresies, but at the cost of wondering who or what one is actually to worship.

Delighting in the Trinity consistently handles this doctrine as if it were an actual element of our knowledge of God, rather than a weird appendix to it. What we have here is a description of the good God of the good news, unfolded in its trinitarian dimensions. We are saying all the same things about the goodness and greatness of God, “but the triune being of God changes the flavour and meaning of every word we use about him.”

Here is Reeves’ swipe at the heresy of modalism:

Throwing the Father, Son and Spirit into a blender like this is politely called modalism by theologians. I prefer to call it moodalism. Moodalists think that God is one person who has three different moods (or modes, if you must). One popular moodalist idea is that God used to feel Fatherly (in the Old Testament), tried adopting a more Sonny disposition for thirty-odd years, and has since decided to become more Spiritual.

“Moodalism” is not just a doctrinal error; the point is that ignoring the trinitarian distinctions actually messes up the doctrine of salvation: “once you puree the persons, it becomes impossible to taste their gospel.”

All I’m really saying is, if you want some painless Trinity help from a teacher thoroughly comfortable with the doctrine, check out Delighting in the Trinity. Four more quotes:

“The Father so delighted in his Son that his love for him overflowed, so that the Son might be the firstborn among many sons.”

“Now, to pray like this – to pray ‘Abba’ in Jesus’ name, empowered by the Spirit – isn’t just the flashy Christian’s way of showing off his theological virtuosity; it is to revel in the shape of God’s own fellowship and beauty.”