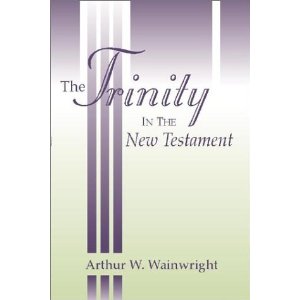 In 1962, Arthur W. Wainwright published The Trinity in the New Testament, a helpful one-volume treatment of a vast subject. Wipf & Stock keeps it in print, and no wonder: Wainwright handled the material so well that only a few pages in it seems dated –though it’s more than fifty years old, and there has been much change in some of the sub-fields it reports on. If it doesn’t quite cover everything a reader could hope for, it nevertheless lives up to the promise of its clear title. These 270 pages deliver.

Here are some scattered notes from a reading of the first fourteen pages, where Wainwright sets up his approach. (I hope to post more notes from later sections in subsequent blog posts.)

The Problem of the Trinity

On the question whether the doctrine of the Trinity can be found in the Bible, Wainwright answers with a qualified no: what can be found in the New Testament is an awareness on the part of some of its authors that they are facing “the problem of the Trinity.” The problem, briefly and binitarianly, is that God is one yet Jesus is God and so is the Father. Add the Spirit to the mix and you have the set of data that demands explanation. “But whether the problem is binitarian or trinitarian in form, the crucial issue is the relationship of Father to Son, because the problem would not have been of practical importance if there had been no Incarnation. If the Word had not been made flesh, there would have been no stumbling-block for Jewish monotheism.” (p. 3)

In terms of the contents of the New Testament, this strikes me as good common sense, and pretty obvious: there aren’t chapters about the Trinity in the New Testament, there aren’t extended passages where an author grapples with the issues and presents a solution. Think of how Paul hammers away at the implications of Israel’s election in Romans 9-11, or how Hebrews reasons through the logic of the New Covenant, or how Acts reports on the apostles coming to terms with the implications of Gentile inclusion, and so on. Nowhere in the New Testament do we find the elements of the doctrine of the Trinity laid out on the table and being made a matter of doctrinal reasoning and formulation. Wainwright admits that “the problem of the Trinity was in the minds of certain New Testament writers, and that they made an attempt to answer it. None of their writings, however, was written specifically to deal with it,” and, he goes on tellingly: “most of the signs that a writer had tackled the problem are incidental.” (p. 4)

Wainwright deftly handles the preliminary question of what counts as a doctrine of the Trinity. If it means the word Trinity, then he pushes that off to the second century, in authors like Theophilus (trias) and Tertullian (trinitas). If it means the philosophical method of handling the truth claims, then he pushes that off until perhaps Clement and Origen. If it means the set of technical terms that grow up around these basic moves (person, essence, etc), then he admits this is a more extended conversation with semantic shifts occurring in all the usages.

The decision to say “the problem of the Trinity” is in the Bible is in part a rhetorical decision, a judgement about the artfully ordered presentation of the truth and the result it will have for the audience. Any presentation of the truth will raise certain questions and tend to suppress others. One of the questions Wainwright’s “problem” terminology raises is whether the New Testament knows that there is a challenge of consistency, or even a paradox, to be dealt with in monotheistic worship of Jesus. Emil Brunner notoriously drew a sharp line between the “simple testimony” of the apostles and the “mysterium logicum” of the One and the Three, posed by later trinitarian theology which “lies outside the message of the Bible.” Wainwright says many sensible things about this “kerygma vs. reflection” framing, admitting its partial validity but also (strikingly, it seems to me, for a book written midcentury) indicating that the distinction has only limited applicability. Here is how Wainwright draws the boundary:

While… the words ‘paradox’ and ‘antinomy’ do not occur in the New Testament, there is in the Prologue of the Fourth Gospel a clear awareness of the paradox of the relationship between Father and Son. The man who wrote ‘The Word was with God, and the Word was God,’ knew that his statement contained a paradox. (p. 8)