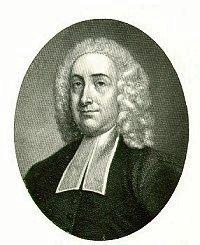 Philip Doddridge (born this day, June 26, 1702; died 1751) is remembered today, if at all, for his book The Rise and Progress of Religion in the Soul. This book was very famous in its time, and was translated into seven languages. William Wilberforce pointed to it as the book that made him take Christianity seriously enough to investigate its truth and relevance. C. H. Spurgeon said of the book, “Though I decidedly object to some things in it, I could wish that everybody had read that book, so many have been the conversions it has produced.”

“Religion” is not quite the word we would use for it today, but Doddridge meant by the term “such a Sense of God in the soul, and such a conviction of our obligations to him, and of our dependence upon him, as shall engage us to make it our great care to conduct ourselves in a manner which we have reason to believe will be pleasing to him.”

The book, dedicated to Isaac Watts, traces the various states we can find ourselves in with regard to this “sense of God in the soul, and … our obligations to him.” Doddridge begins with several chapters on sinfulness, and then presents the good news of salvation. He wanted his book to be “useful to all its readers, and contain something suitable to each,” so he explored “a great variety of circumstances.” There’s a chapter here for every condition you can imagine: newly converted, backslidden, unsure about how to judge progress in the Christian life, needing comfort, seeking guidance for how to structure a day wisely, stirring up your heart, and getting ready to die.

Here is an excerpt from chapter 22, in which Doddridge describes for you what it will be like when you first begin to lose your focus on Jesus. He makes sure you know the first warning signs, and also shows you where you are headed.

When your love to God our Father and to the Lord Jesus Christ fails, your fervor of Christian affection to your brethren in Christ will proportionably decline; and your concern for usefulness in life abate, especially where any thing is to be done for spiritual edification. You will find some one excuse or another for the neglect of religious discourse, perhaps not only among neighbors and Christian friends, when very convenient opportunities offer; but even with regard to those who are members of your own families, and to those who, if you are fixed in the superior relations of life, are committed to your care.

With this remissness, an attachment either to sensual pleasures or to worldly business will increase. For the soul must have something to employ it, and something to delight itself in; and as it turns to the one or the other of these, temptations of one sort or another will present themselves

This is wise pastoral counsel. The remarkable thing is that Doddridge could put it into book form, and it continued to do its work.

Doddridge is also remembered for a handful of hymns; he wrote several hundred, and a few stayed in circulation for a long time.

Doddridge was already well established in ministry as a Dissenter when the Methodist revivals broke out. Though he had expected the fire of God to fall somewhere other than the Anglican church, and on people who were more Calvinist, nevertheless Doddridge embraced the revival and did what he could to support it. He taught for years in an academy of the Dissenting church, and while he himself was decidedly orthodox, his colleagues and students had some radical views (arian and socinian notions about Christ and salvation). Doddridge never seemed to understand just how dangerous the liberal tendency of his co-workers really was.

Though the Rise and Progress was his most influential work, Doddridge’s favorite project was the multi-volume Family Expositor. The Expositor was an expanded paraphrase of the New Testament, giving the sense of each passage by unpacking what it meant at greater length. A sentence of one of Paul’s letters might take three sentences in the Expositor’s paraphrase. He also included explanatory notes at the bottom of each page, indicating which passages had been controversial. All together, it was a unique Bible reference work, and was popular for several decades.