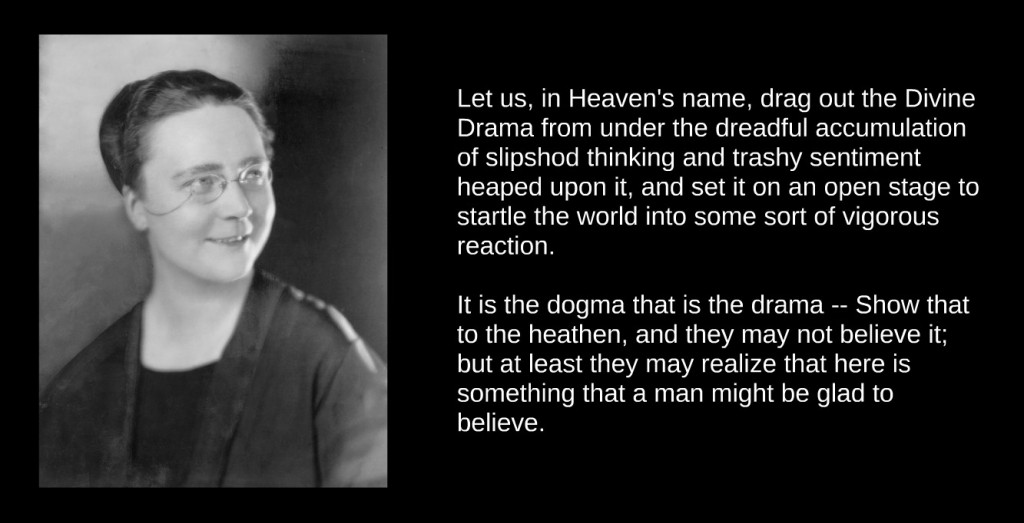 Dorothy L. Sayers (1893-1957) was a serious amateur theologian who viewed her task as taking the creed and re-stating it so people could hear and understand it. But she wouldn’t want me to call her a theologian.

I’m calling her one because I think every Christian is in some sense a theologian –either a good one or a bad one. But Sayers was not a professional theologian, and she took every opportunity to make some version of this denial public. “Playwrights Are Not Evangelists,” she wrote in 1955, and in later life she had a ready-to-mail rejection letter for anybody who invited her to speak on theological topics. She called the form letter NMR (No More Religion).

So how do we talk about the theology of an avowed non-theologian? You have to start by taking Sayers at her word, respecting her wish to be understood as a professional writer but an amateur theologian. Sayers was a dramatist who served the church as an honest layperson plying her secular craft, without ecclesial ordination or doctrinal training. It is precisely here, as a professional in wordsmithing who happens to be an otherwise ordinary Christian, that she rendered her unique service to the church. Sayers set herself to the task of stating the Christian faith for the popular mind in words as clear and dramatic as possible. Along the way to her goal, she encountered two main obstacles: the inarticulacy or obscurantism of professional theologians, and the intellectual laziness of the average uninformed layperson.

I recently gave a short lunch talk to a group of faculty from the various academic departments at Biola. Organized by the office of the integration of faith and learning, these lunch talks are occasions to gather for interdisciplinary discussion about thinking Christianly across the full range of university disciplines. The video is below.