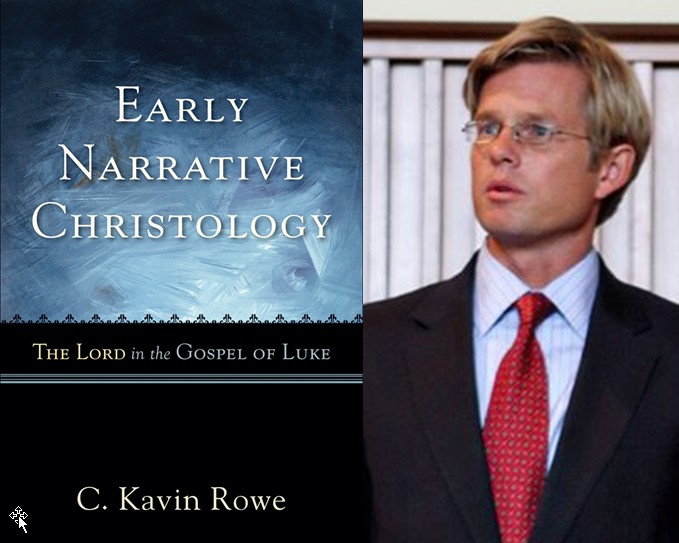 In the Torrey Honors Institute, our students study the Bible (along with classic theology texts) and the great books (including literary, philosophical, and political texts). The two sides of this education are constantly informing each other. I was recently reminded of one of the ways this happens by a commentary on Luke that includes an appeal to the sensibility that is formed by careful reading of classic books.

There are lots of things to love about C. Kavin Rowe’s 2006 book Early Narrative Christology: The Lord in the Gospel of Luke (2006 from de Gruyter; 2009 for the Baker paperback). It’s well written, it engages current scholarship clearly and helpfully, it makes a compelling and focused argument while staying alert to larger surrounding issues, and it sends you back to the text of Luke ready to read it better.

In the field of New Testament christology, a vast amount of attention has been given to the study of christological titles: terms like Christ, Son of God, Son of Man, and of course Lord. Much of the work is excellent, and there’s no denying that NT authors make use of such titles to identify and explain Jesus. But Rowe takes that last title, Lord, and handles it as more than a title, more than a discrete label that carries its meaning within itself. He studies how Luke employs the word in the course of his narrative, plotting its development and resonances in the actual course of the story. Rowe’s reasons for this are many, but stated rather philosophically it comes down to his view that “identity is not something that is static or fixed but rather is inextricably bound to narration.” And since the gospels are in the business of identifying Jesus, the exegete should approach them with well developed narrative tools.

But it’s sloppy of me to say “the gospels,” because what Rowe studies here is “a mode of narration entirely unique to Luke,” and he admits that “neither Mark nor Matthew writes in this way.” It’s Luke who “uses kyrios so repeatedly that its reverberation within the narrative becomes the rhythm of the Gospel… somewhat like the famous Leitmotiv of Beethoven’s Fifth Symphony, which not only opens the piece in a dramatic fashion but can also be heard clearly –with intricate variation– in all four movements, directing, as it were, our listening to and experience of the piece.”

Nice musical analogy there. But the main thing Rowe really brings to the table of biblical studies is not a musical aesthetic but a literary one. He is trying to show how repetition works in a carefully crafted story, how it establishes a controlling center of meaning and enables the author to carry forward a subtle argument on a framework of significant variation.

You know: like a good book. Around page 59, just before making his most important exegetical moves, Rowe takes a step back:

Anyone who has experienced a great literary work is aware of the way such repetition functions. Words read/heard once are experienced as laden with new, deeper meaning as one reads/hears them again. Yet, under the hermeneutical pressure of form- and tradition- critical exercises, Lukan scholars can too easily miss precisely this aspect of Luke’s narrative. Turning to other texts in order to learn again how to discern the significance of repetition may thus help to increase our understanding of the importance of this technique for the interpretation of Luke (and other biblical texts). The aim here is not so much to remind biblical scholars that repetition is frequently a constitutive feature of literarily sophisticated texts… rather, the diverse examples below are employed primarily to illustrate how actually to recognize such a feature and discern its profound importance for the text’s meaning.

In Shakespeare’s Macbeth, the witches’ incantation “Fair is foul, and foul is fair” is ear-catchingly weird, so when Macbeth himself strides onstage two scenes later saying “So foul and fair a day I have not seen,” the attentive reader or listener senses that Macbeth is being somehow identified with, or assimilated to, the cadence of the witches. A nexus of meaning is established, so that when Banquo asks Macbeth why he is startled by the witches’ greeting, “things that do sound so fair,” the repeated word has picked up momentum. The words are powerful on their first use, but they gather power as they go.

In Flannery O’Connor’s “Good  Country People,” the title of the short story is itself the phrase on which characters ring changes. It is used constantly, but means something different depending on whether the speaker is Mrs. Hopewell (apparent praise but veiled condescension), Hulga (open contempt), or Manley Porter (a ruse). To read the story without noticing how all values are revaluated around the word “country” can hardly be called reading the story at all.

In Aeschylus’ Oresteia trilogy, the set of δίκη words translated just, justice, justify, judge, and so on are taken up in speech after speech, sometimes as the explicit subject of debate and sometimes as the sign of implicit transformations. “There is a cumulative, transforming connotation of δίκη through repetition in which the reader/auditor is required to discern in the connections between this word and its cognates different and more complex meanings by the end of the trilogy.”

These three brief lessons in meaningful repetition set up Rowe’s exposition of Luke perfectly, though each of them will be more meaningful to readers who already know the examples well (we read all three in Torrey). Having learned from great literature the appropriate habits of attentiveness and curiosity, interpreters of Luke are ready to take up that great book (which, together with Acts, constitutes a fourth of the New Testament) and track the way of the Lord through it.