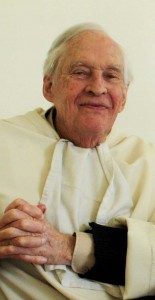 Though it happened on November 11 of 2010, I just learned of the passing of English Dominican scholar Edmund Hill. Fergus Kerr, O.P. wrote a good obituary of him here. He had a long and eventful teaching career in South Africa (where he made himself persona non grata by criticizing the Apartheid policy) and at Cambridge. Hill is from that generation of Roman Catholic scholars whose teaching careers straddled Vatican II –he was born four years before Pope Benedict XVI. Hill taught all over the fields of Scripture, doctrine, and the history of theology. He is most famous for his voluminous translations of Augustine, which includes Augustine’s sermons, commentaries on Psalms and John, and Teaching Christianity (De Doctrina Christiana).

But above all, Hill’s great scholarly monument is his translation and commentary of Augustine’s De Trinitate, his treatise on the Trinity. As a translation, it probably tends a little too much toward dynamic equivalence, which gives Augustine a definite tone of voice: It makes him sound like a highly-educated British gentleman with a biting wit. Because that’s what Hill was.

The real treasure of Hill’s De Trinitate, however, is the introduction and copious notes. I don’t know the word count, but there’s a whole 20th-century book about Augustine shuffled in here between the pages of the fifth-century treatise. Whenever I assign the book in a class, I have to decide whether to assign the notes or not, because (students point out!) assigning them is like adding another book to the list.

And Hill’s notes are great. He is a commentator of the belligerently loyal sort, defending Augustine against all attackers. Augustine may not have been perfect in Hill’s eyes, but he was better than everybody before or after him. Hill dismisses Rahner’s anti-Augustine criticisms on one page and puts the overweening Thomists in their place on another. He reads Augustine like it matters, and checks his Scriptural references carefully, providing miniature bibliographic essays connecting the dots when Augustine leaps from point to point. Hill is sharp and incisive, feisty and principled, but above all, wise on page after page. It’s just great Augustinian trinitarian stuff, a real accomplishment in the field.

Here are some of my favorite Hill comments, from around De Trinitate.

Yet these three works [Confessions, City of God, De Trinitate] do form, in a sense, a kind of trilogy… all three give expression in different modes to one of his basic theological intuitions. This was his keen sense of the historical, or perhaps a better word for it would be the dramatic, dimensions of the truths of the Christian religion. He is indeed at his best, as a theological writer, in the dramatic presentation of truth, and at his weakest in the abstract statement of it. This goes a long way to explain, and even to excuse, his often tedious prolixity… But Augustine seems to have perceived, though he never explicitly defined this perception, that it is of the essence of Christian truth to be dramatic, to be an encounter cast in dramatic form between God revealing and man believing. And so in the Confessions we have the history of his own personal drama, a drama primarily of faith. In The City of God we have the dramatic history of the church… But in the De Trinitate, with a stroke of almost unconscious genius, we are presented with the dramatic history of God. (p. 18)

But the dramatic scope of the De Trinitate was not even suspected, and so its essential significance was lost on the Latin theology of succeeding ages. The work was indeed much copied and diligently mined…. But the central point was missed entirely, and that is that Augustine is proposing the quest for, or the exploration of, the mystery of the Trinity as a complete program for the Christian spiritual life, a program of conversion and renewal and discovery of self in God and God in self. Thus it has been that the doctrine of the Trinity has been effectively detached from the wider movements of Christian spirituality and devotion in the West, and the mystery has come to be regarded as a curious kind of intellectual luxury for theological highbrows, a subject on which not many priests are eager to preach sermons, nor congregations to listen to them. (p. 19)

..he presents his quest for God the Trinity as both an all-absorbing personal preoccupation, and a kind of plan for the spiritual life of any Christian. We are all urged to join in the quest, not just by Augustine, but by the Spirit of God in the scriptures. Three times, at key points of his work, he quotes Psalm 105:3-4: Let their hearts rejoice who seek the Lord; seek the Lord and be strengthened; seek his face always. It is a summons addressed in the plural to all who fear the Lord. We are reminded of it at the beginning of the quest, I,2,5; at the crucial turn it takes halfway through, IX,1,1; and at the end, when he is about to sum up and declare the quest a magnificent, a most successful failure, XV,2,2. (p. 21)

In the first place, we really ought to demolish the distinction between the Latin and Greek traditions for this early period altogether — as he himself does when it suits his book… What we have in fact at this early stage of theological history — and will continue to have — are various local traditions, African, Roman, Gallic in the West, Alexandrian, Antiochene, Cappadocian in the East. (p. 38)

(On Hilary of Poitier’s book on the Trinity): This is the only work of his predecessors that Augustine actually quotes by name, in Book VI of his own De Trinitate. But the quotation comes from the beginning of Book II of Hilary’s work, and I cannot resist the rather irreverent thought that Augustine read Hilary that far and then stopped. If this is true, he did not miss very much. (p. 45)

A favorite tag of Augustine’s in his sermons is nondum in re, tantum in spe, ‘not yet in fact, only in hope.’ (p. 94)

a christocentric approach to the Christian life is excellent in a limited context. But it leaves one with the question, what was the center of this Christ center, of Christ’s own life? If one is going to be honest with the gospel, one must surely answer, God, the Father. So ultimately Christian theology must be unashamedly theocentric. (p. 96)

Boethius would wrestle with [this problem] in his De Trinitate, a work that only logicians are capable of reading, and that possibly introduced more smoke than light into the subject.

Boethius would wrestle with [this problem] in his De Trinitate, a work that only logicians are capable of reading, and that possibly introduced more smoke than light into the subject. (p. 202)

Confusions are part and parcel of Augustine’s via inventionis, which is so different from Aquinas’ via doctrinae. (p. 203)

We have to allow, in a way which Aquinas could scarcely do, that there are contexts in which we can legitimately talk about God as ‘a person,’ just as much as we can also talk about him (them) as ‘three persons.’ (p. 235)