There’s no easier job in the world than being a bad teacher. It’s a cinch, with short hours and plenty of long vacations. The pay’s not always great, but as long as your standards are low, and all you’re looking for is an easy job, I recommend being a really rotten teacher. Be really awful. Cobble together some industry-standard lesson plans and re-run them every year; grade superficially and with an emphasis on numb

ers; kick back and watch the seasons change as the sea of young faces before you renews itself year after year. (Don’t ask me how I know so much about this)

But as soon as you decide to be a pretty good teacher, you’ve let yourself in for a world of trouble. If that stack of papers needs thoughtful grading and a quick turn-around, you’re in for long hours of intense focus. If you have to re-think every sentence to make sure it connects with this particular group of students, you’re in for a high-energy workout.

And if you decide to try for excellence, to really make a difference for your students, then you’ve moved to The Other Side of teaching, and you find that there are few jobs harder than being a good teacher. It’s not just that you’ll have to put in a lot of hours. It’s that you’ll have to think. Think!

The really hard part about teaching is the thinking. Because if you want to help people as an educator, you have to know what people are for, why they exist, what it would mean for them to be fulfilled, and what Good their existence is ordered toward. Suddenly, you are up to your chin in the most important philosophical questions that can ever be asked. 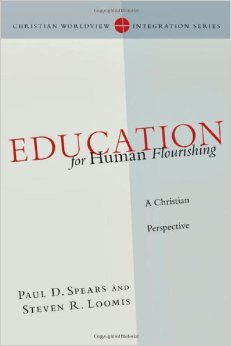 Here is some help for the hard thinking: Paul Spears and Steve Loomis have just published a book called Education for Human Flourishing: A Christian Perspective. Steve Loomis teaches at Wheaton College and has published prolifically on the philosophy of education. Paul Spears, as Scriptorium readers know, is a core member of the Torrey Honors Institute faculty, a celebrated teacher, and one of our bloggers. He wrote the “20 Things I Have Learned as a College Professor” post that took on a life of its own around the blogosphere. He’s a close friend, so don’t expect this post to be an impartial book review. It’s a partisan recommendation: If you are a teacher or you want to be one, get this book and read it.

Education for Human Flourishing is one of the first books to be published in InterVarsity’s new and ambitious Christian Worldview Integration Series. The series editors are J.P. Moreland and Francis J. Beckwith, and they provide a substantial 18-page series preface. As an essay on Christian worldview integration, this preface would be worth reading all by itself. As an introduction to Spears and Loomis’ task, it is very clarifying. What Moreland and Beckwith want to know, and what they are commissioning all their authors to explain, are the answers to these questions:

Is Christianity a knowledge tradition or merely a faith tradition, a perspective which, while true, cannot be known to be true and must be embraced on the basis of some epistemic state weaker than knowledge? Is there nonempirical knowledge in my field? Is there evidence of non-physical, immaterial reality (e.g., linguistic meanings are arguable, nonphysical, spiritual entities) in my field? Do the ideas of Christianity do any serious intellectual work in my field such that those who fail to take them into consideration simply will not be able to understand adequately the realities involved in my field?

Spears and Loomis take up these questions in the field of education. They have precise and definite ideas about what humans are for, and what it would mean for them to flourish. Humans are God’s creatures, embodied souls in a real, created world. They are made in God’s image but are fallen, requiring redemption from their sin and illumination of their minds so they can know God. They are free, creative, and personal, not merely animal or mechanical. All of these claims can be stated as Christian doctrinal commitments (I speak as a theologian). And all of these claims make a difference for the practice of education. Education for Human Flourishing explains how we should teach, if it is true that people are what the Bible says they are.

What I enjoy most about the book is the way Spears and Loomis practice the art of paraphrase. They don’t just assert that students have human dignity and should be treated appropriately. They translate that conviction into a variety of terminologies: They explore biblical teachings about it, they illustrate it with Platonic dialogues, they provide a history of certain modern movements that have rejected the notion, they use Martin Buber’s I-Thou personalism, they bring in an institutional critique about human scale and the information economy of schools. The result is powerful. The core of this book is a few simple ideas about education which are even commonsensical, but Spears and Loomis turn those ideas around and examine them so evocatively, from so many different angles, that any reader is bound to be caught off guard by one of the re-statements.

Even the title of the book is an example of their craft as paraphrasers: “Education for human flourishing” is a contemporary way of pointing to what Aristotle called paideia for eudaimonia, the kind of mental and cultural formation that leads to true happiness. Or, to put it another way in an attempt to make their claims clear in our era of advanced capitalism, they say that “educators should understand that a love of learning is a fundamental aspect of human flourishing, and not see it as a means of proper investment in human capital.” Again, no sooner have they described the project in those terms, than they mix them together in striking new formulations: The problem with the cave that Plato describes is that “more information exists outside of the cave than in it.” This communication style makes the book well-suited for a range of readers. If the ideas are new to you, you’ll probably be able to grasp them in one or another vocabulary. If the ideas are old and familiar, you’ll probably find yourself re-discovering them with the excitement of a striking re-description. If the short words don’t help you, the long ones will.

The alternation among terminologies is not just a communication strategy, though; it indicates a duality that is right at the heart of what Spears and Loomis accomplish in their book. As educators, they are doing something very old and very contemporary. Education for Human Flourishing is a curious and provocative mixture of old-fashioned and new-fangled.

On the old-fashioned side: The book argues strongly that truth is a relationship between statements and states of affairs. Reality is out there, and it’s possible to know and say true things about it. Spears and Loomis are as careful and nuanced as they can be in a book for a general audience, but this is a pretty straightforward commitment to a correspondence theory of truth, and of propositional knowledge. Similarly, the authors argue for a substance dualism: there is a difference between bodies and souls, and humans have both. They sketch out a brief history of education that makes much of the middle ages and stretches back to Plato’s academy. They clearly picture themselves as engaged in an ancient practice that looks a lot like what most humans, for most of human history, thought they were doing when they did education. By contrast, the modern turn to exclusive empiricism is a constriction of the great educational tradition. “Empiricist epistemology,” they warn, “has now become the primary framework by which academics pursue knowledge within their fields. Kant saved knowledge and the project of science from Humean skepticism, but knowledge must be grounded in sense experience alone.”

On the new-fangled side: Spears and Loomis are fully conversant with the contemporary university, and understand in great detail why it is like it is. They analyze it sympathetically, and describe it in terms of its “information economy,” that is, “how participants within a social institution like education acquire and use information, how they make decisions, how they act on information, and how that information is affected by the formal and informal rules of the game.” They are alert to the ideologies that put pressure on schools and teacher-training programs. “The secular conception of the state is not an informationally neutral conception, as some would like to suppose. A secular state has informational preferences of its own and will sanction some moral education programs over others. Christian educators will do well to offer faith and reason to the complex question of moral education in the public sphere.”

Their diagnosis and prescription for contemporary education are never nostalgic calls for a return to the pre-modern; it is always an exhortation to make the most of available materials and move on to new accomplishments. In fact, the authors write with such consistent optimism that they communicate a sense that a great educational renaissance could be just ahead.

Somewhere in the harmony between old-fashioned and new-fangled, Spears and Loomis take a stand on the side of humanity itself, and from that position they rage against the machine: Education needs to find its way to a small scale, remaining at a human size. It takes place between I and Thou, not between It and It. Worried that “the collective is clobbering the individual in many spheres of social reality,” they point out how bureaucracies treat schools as industrialized knowledge-factories, cranking out “teacher-proof curricula” that “regulate production down to the minutes used for transparencies.” In contrast, they want education to look something like this: real teachers talking to real students. Humans interacting, learning, growing, flourishing.

Over and over again, Spears and Loomis hand the baton on to the professional teachers who are their readers. It’s up to them to use the insights and analysis of this book to transform their own work.

Educators now face a decision. Will we proceed further into the technical direction that ultimately leads to human opacity and the I-It condition? Will we permit the information economy of education to slide further into banal uniformity and standardization? As C.S. Lewis queried, will we continue to pursue the abolition of man? Or will we see this as an opportunity to fulfill the mandate by Jesus Christ to salt institutions with better ways of structuring and doing education? Is there a civil-rights opportunity before educators concerned with justice?