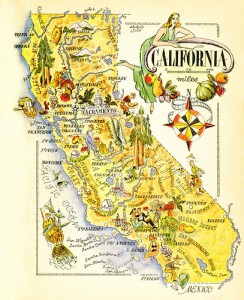 Joe Gorra at the Evangelical Philosophical Society blog interviewed me and co-conspirator Jason Sexton about our project called Theological Engagement with California Culture. Here are a couple of excerpts from the interview.

On how the project got started:

The basic idea developed from a summer class that I taught a couple of times over the past decade. I teach in the Torrey Honors Institute at Biola University, where we read the great books, from Homer through Virgil and Augustine to Dante and Calvin and Flannery O’Connor. I wanted to apply that great books approach to California literature, about which I knew very little. I just had an instinct that the perennialist approach, in which we read the proven classics, “the best which has been thought or said” in the history of the western world, would benefit from a little dose of localism, where we investigate a regional heritage and get to know our own surroundings.

For a summer class with undergraduates, that project took the form of picking a few classics of California literature. The standard list includes novelists like Jack London and John Steinbeck, poets like Robinson Jeffers and Lawrence Ferlinghetti, essayists like John Muir and Ambrose Bierce, and a few outsiders like the polish-lithuanian writer Czeslaw Milosz who lived in Berkeley for decades and thought hard about the spirit of the place. The class worked really well, because even though California hasn’t exactly produced its own Homers, Platos, or Dantes, we do have an interesting and thought-provoking little literary heritage.

It would probably be in bad taste to belabor a Gold Rush analogy, but I think that California as a theological subject is resource-rich and under-explored. I just started poking around a little bit in the area of California literary regionalism as an amateur investigator, trying to solve the small-scale problem of “what are the California great books I should assign?” What I discovered is that there’s been some really good work done on that subject by real literary scholars. But when it comes to theologians, we just haven’t done enough with California. As soon as I started using the tools of my own trade and asking theological questions, I found vast stretches of unexplored intellectual territory. I may not have cried “Eureka,” but I am sending out the word that there’s work to be done here for many hands.

Click on through to read the whole thing. Gorra’s an excellent interviewer, and got Jason and me to say things more clearly than we might have done without such good questions. Plus he embedded all the relevant links to all the right places. And while you’re there, take a look around the rest of the stuff that’s on the EPS blog, which is a very interesting place lately.