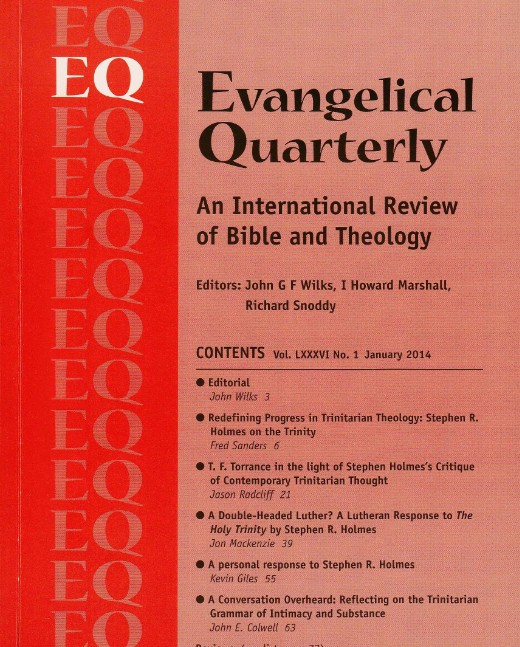 In July 2013 in Cambridge (UK), the Tyndale Fellowship’s Historical Theology Study Group gathered to hear papers responding to Steve Holmes’s book The Holy Trinity: Understanding God’s Life (published in the U.S.A. as The Quest for the Trinity).  I got to attend because I was already in the area for Torrey’s annual July class in Cambridge, and I also got to present a paper, perhaps because Matt Jenson and I had already run our mouths quite a bit about the book. Steve Holmes was there as well, and offered a response to the papers at the end of the conference. Jolly good, wot.

The quality of the discussion was high, and somebody had the bright idea (maybe it was Jason Sexton or Thomas Noble) of gathering the papers up for publication in the next issue of the Evangelical Quarterly. So that’s what they did, and the volume came out in January 2014: volume 86, no. 1.

So here it is, an introductory editorial followed by five essays on Holmes’ book. Seek it out in a theological library near you!

*Editorial, John Wilks: Wilks sets up the essays, noting that “it is hoped that a more wide-reaching collection of papers will be separately published in due course.” He also points out that one of the papers in the journal was not presented at the conference but was commissioned for the journal: the one by Kevin Giles. Giles, by the way, wrote a chapter-by-chapter summary of Holmes’ book, which Wilks includes in his editorial.

*Redefining Progress in Trinitarian Theology: Stephen R. Holmes on the Trinity, Fred Sanders. Holmes’ book pronounces much of the modern trinitarian revival dead on arrival, or at least completely out of sync with classical trinitarian thought. So I tried to answer the question, “If Holmes is right, what’s the next step for constructive systematic theology?” Because I’m largely convinced by Holmes’ case, and I’m currently writing a constructive trinitarian theology book, you can pretty much tell that in this essay I’m talking out loud to myself and figuring out what to do next. Short version: more biblical argumentation, more attention to the divine unity, and more classical theism w/help from new analytic theology tools.

*T.F. Torrance in the Light of Stephen Holmes’ Critique of Contemporary Trinitarian Thought, Jason Radcliff. Torrance is simply ignored in Holmes’ book, and when confronted about this, Holmes gave the perfectly reasonable, and also appropriately humble, response: Can’t do everything in one book. But as Radcliff points out, Torrance’s theology is highly relevant to the way Holmes approaches the history of trinitarianism, especially in the way TFT appropriated the patristic witness and described the connection between economic and immanent Trinity. So this article (by a Torrance scholar) connects the dots, supplementing Holmes’ work well.

*A Double-Headed Luther? A Lutheran Response to The Holy Trinity by Stephen R. Holmes, Jon Mackenzie. Did Martin Luther put the soteriological oomph into Nicene theology, thus securing the doctrine of the Trinity as a source of the Reformation’s vigor, or did he dissolve the immanent Trinity into the economy of salvation, using the communicatio idiomatum as a proto-Hegelian universal solvent? Inquiring minds want to know. Mackenzie presents this as an early Luther vs. late Luther tension, but mainly as a problem of the reception-history of his theology.

*A Personal Response to Stephen R. Holmes, Kevin Giles. This chapter is a bit of a laundry list of observations, but Giles (who also provided the book summary at the beginning of the issue) is especially concerned to ask if Holmes has been quite fair in reading how the Nicene fathers used scripture, quite generous enough with the positive advances in modern trinitarianism, and quite alert enough to the dangers of the “popular evangelical hierarchical construal of the doctrine of the Trinity” to which Giles has given so much attention in his own work.

*A Conversation Overheard: Reflecting on the Trinitarian Grammar of Intimacy and Substance, John E. Colwell. Modern trinitarianism got much of its energy from contrasting Augustine and the Cappadocians as two very distinct ways of doing trinitarian theology. Holmes’ book speaks for more recent trends which think the contrast was grossly overdrawn. Colwell concedes that the contrast was exaggerated, but that there really are points where the two traditions do in fact differ, and that these matter: especially when it comes to the identity of the Holy Spirit and the way the three persons are one God.