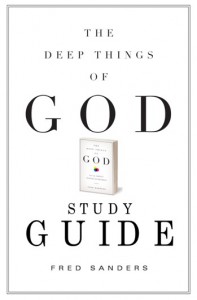 For the next several weeks, I’ll be teaching a Sunday School class on the Trinity by leading discussions of my book The Deep Things of God: How the Trinity Changes Everything. We’ll be studying one chapter per week, and I’ll be producing a study guide for the class as we go. The heart of the study guide will be a dozen or so discussion questions on each chapter. But I’m also including a few other features, like short biographical sketches of the people quoted in each chapter, and a glossary for words or phrases that people have asked me about.

INTRODUCTION:
EVANGELICALS,
THE GOSPEL, AND THE TRINITY

Although this section is an introduction and not one of the book’s numbered chapters, it is as important (and as long) as a chapter.

Evangelical Christians are not famous for being passionate about the Trinity. One of the reasons for this is that we are famous for emphasizing the parts of the Christian message that demand immediate attention: the Bible, the cross, conversion, and heaven. But the gospel is grounded in the Trinity, so evangelical Christians should get back in touch with the Trinitarian depths of the gospel we proclaim. This book is an invitation for evangelicals to see how the Trinity is already at work in the things we value most. Throughout the book, we will hear evangelical Protestant voices teaching us what we have forgotten about the good news of the Trinity.

1. (pp. 7-8) “We tend to acknowledge the doctrine with a polite hospitality but not welcome it with any special warmth.” This is a broad generalization! But think about whether this is true of the churches and ministries you have been personally involved with. In your own history as a Christian, how has the Trinity been handled? What has motivated you to think about the Trinity? Has anything ever de-motivated you?

2. (pp. 7-8) How is your church doing right now with the Trinity? Does it treat it with mere politeness, or with actual warmth and excitement?

3. (pp. 7-8) Now it’s your turn to generalize: What role does the Trinity play “in the minds and hearts of evangelical Christians” at large?

4. (p. 9) This book claims that the Trinity is what makes sense out of all the things we do as evangelicals. Here in the introduction, ask yourself if that seems plausible to you. Could it possibly be true that all these things could really be Trinitarian deep down: “personal evangelism, conversational prayer, devotional Bible study, authoritative preaching, world missions, and assurance of salvation?”

5. (p. 10) “Evangelicals are too Trinitarian to be so un-Trinitarian!” What is the meaning of this apparent paradox?

6. (p. 12) On p. 12, we hear some standard evangelical advice: “Cultivate a personal relationship with Jesus by reading your Bible, praying, and going to church.” There is nothing wrong with this advice. So why does it sound hollow to so many of us?

7. (14-20) This section on “Emphatic Evangelicalism” describes the relationship between the complete set of Christian beliefs on the one hand, and the points that we should emphasize on the other. Which is more important, to know a lot or to know what to emphasize? Why not emphasize everything?

8. (19) “What is needed is not a change of emphasis but a restoration of the background, of the big picture from which the emphasized elements have been selected.” Aside from reading a book about the Trinity, what kind of things can you do to recall “the big picture” or “restore the background” of your theology?

9. (p. 19) This book claims that the Trinity is part of the background, not one of the things to be emphasized. The goal of Deep Things of God is to focus our attention on the Trinity for a while, so that the doctrine can then “recede from the foreground of our attention, back into the background.” Do you agree, or do you think Christian proclamation should always include a lot of talking about the Trinity?

10. (p. 24) Why won’t this author define the word “evangelical?” He obviously cares about the word, and uses it extensively, but it seems he must have some reason for refusing to define it. Can you tell what that reason is?

11. (p. 23) My evangelical heritage is all over the place: a mixture of pentecostalism, Methodism, community churches, nondenominational charismatic retreats, parachurch groups, and the Evangelical Free Church. There are major sectors of the evangelical world I have not lived in, though I will be quoting from all sorts of evangelicals in this book. As you begin the book, think of the various churches and ministries that have shaped your understanding of the evangelical Christian faith.

From the outline of the book (pp. 25-26), you can see that there will not be a chapter about the Biblical foundation of the doctrine of the Trinity. There will also not be a chapter about the historical development of the doctrine. Obviously these are two very important areas of Trinitarian theology, but they do not fit within the scope of this book. If you need to study these subjects, be sure to do so on your own.

Pray about your evangelical heritage. Thank God for the ministers who brought the message of salvation to you, and ask God to give you deeper insight into, and experience of, the things of the gospel.

Gerald Bray (p. 10): Gerald L. Bray is an evangelical Anglican theologian, Professor of Divinity at Beeson Divinity School, and more recently Director of Research for the Latimer Trust. He is editor of the quarterly journal The Churchman, and has written several important books including The Doctrine of God and Biblical Interpretation Past and Present. We will hear from him a few more times in this book (speaking highly of liturgical worship in the next chapter, for instance). Bray’s comments on evangelical doctrine and spirituality are especially valuable because of his deep sense of history. I heard a rumor he’s working on a systematic theology.

Thomas Goodwin (p. 13): (1600-1680) Puritan theologian. Educated at Cambridge, he served as chaplain to Oliver Cromwell and was president of Magdalen College, Oxford. He was a member of the Westminster Assembly, but was a congregationalist in polity. Goodwin’s collected works fill twelve volumes, and are packed with wisdom. His commentary on Ephesians is wide-ranging and insightful (we will read a bit from it in chapter 3, below), but he also wrote important works on christology, the Spirit, and the gospel. Goodwin is sometimes praised as being “the readable Puritan,” but that doesn’t mean he’s easy to read; it just means he’s easier to read than John Owen. But Goodwin is well worth the eyestrain.

J.C. Ryle (p. 14): 1816-1900, evangelical Anglican bishop of Liverpool. He wrote a number of vigorous tracts (collected in Old Paths and Practical Religion), a study of Christian Leaders of the Eighteenth Century, and a seven-volume series of clear, useful Expository Thoughts on the Gospels. Ryle was a staunch Calvinist and an opponent of the Ritualit and Oxford Movements in the Church of England. He knew how to pick the right fight and draw the right dividing line, without becoming narrow or sectarian. In this book I will usually quote him when I need help making a distinction between evangelical positions and others.

The Fundamentals (p. 15): A 90-chapter project, published serially in 12 volumes from 1910-1915 through the financial backing of the Stewart brothers, oil magnates. Edited by a trio of important evangelicals (notably R. A. Torrey, the final editor), The Fundamentals represent a Who’s Who of conservative evangelicals at the beginning of the 20th century. People often dismiss them or make fun of them these days, but overall the collection is very solid. People also mock them for lacking a Trinity chapter, but at several points in this book we will see just how profoundly Trinitarian they were.

John Wesley (p. 18): 1703-1791, Anglican priest and founder of the Methodist movement. His ministry was the center of the eighteenth-century revival that accomplished so much in England and America. A many-sided figure, Wesley is the best of the evangelical Arminians, and in this book we will call on him (and his mother and brother) repeatedly.

B.B. Warfield (p. 24) (1851-1921). Great theologian of old Princeton Seminary, who wrote on Augustine, Calvin, the Westminster Assembly, and Biblical authority. In this book I only quote him for his remark about evangelicalism, but his essay “The Biblical Doctrine of the Trinity,” while demanding, is one of the best essays ever written on the doctrine.

Evangel (p. 10): The gospel. The Greek word for gospel is euangelion, which combines the prefix eu- (good) with the word -angelion (message).

Sub-Trinitarian (p. 12): Falling below the high standard of doctrine set by the Trinity. To believe in one God without acknowledging that the one being of God includes the three persons of Father, Son, and Spirit is “merely monotheisitic,” or “unipersonally theistic,” or sub-Trinitarian.

Reductionist (pp 15, 16): Explaining things as nothing but their elements, while leaving out of account the larger realities that constitute them. Whenever you call something “nothing but…” you are in danger of “nothing buttery” or reductionism. The related term here is anemic, which refers to a state of weakness.

False dichotomy (p. 20): Making two possibilities seem as if they exclude each other, and requiring people to choose between them. “Do you want salt OR pepper, because you can’t have both.” But when you can in fact have both, you may refuse to choose.

Ecumenical (p. 20): In this context, referring to Christianity as it exists in multiple different denominations and traditions. Yes, even the ones that are way off.

Bruised reed and smoking flax (p. 20): A smashed stalk of a plant, and a candle wick that is about to go out. In Isaiah, God promises that his servant will be a gentle healer who can nurture these fragile things rather than destroying or discarding them. In Matthew 12, Jesus is identified as that servant who will not snuff out burning flax.

Peter Toon, Our Triune God: A Biblical Portrayal (Victor Books, 1996). Toon is at home in church history and theology, but here he focuses his attention on the biblical foundation of Trinitarianism.

Robert Letham, The Holy Trinity in Scripture, History, Theology, and Worship (P&R, 2005). This is probably the most satisfying book on the list. If you think you’ve already got the basics and you want something a little tougher, but you’re not quite ready to go for the rigor of purely academic works, go with Letham.

James White, The Forgotten Trinity: Recovering the Heart of Christian Belief (Bethany House, 1998). White’s a fighter, so if you’ve got some sort of argumentative reason for studying the doctrine (anti-trinitarians hassling you into finally thinking about what you believe, for instance), you might want to start here.

Brian Edgar, The Message of the Trinity (IVP, 2005). After a brief introduction, Edgar’s book is just pages and pages of exposition of scriptural passages. If you’re looking for proof to build a case for the Trinity, go with Toon. If you want to see how much you can get out of sixteen classic places in Scripture, dig in to Edgar.