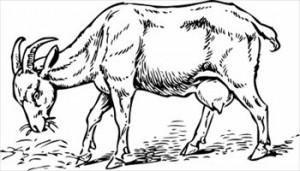 But not just any goat. This goat had traveled twice around the world, providing a steady supply of milk for the sailors on two long journeys. A good, well fed milk goat will give a quart or two of sweet milk per day, and this goat apparently kept producing, to the delight of her shipmates.

She had sailed on two important ships: first with Captain Wallis on the Dolphin, when the Dolphin became the first ship to go twice around the world. Then she was loaded onto the famous ship Endeavour, commanded by Captain Cook.

One sailor on the second voyage reported,”I must not omit how highly we have been indebted to a milch goat: she was three years in the West Indies, and was once round the world before in the Dolphin, and never went dry the whole time; we mean to reward her services in a good English pasture for life.” The lords of the Admiralty agreed with this sailor, and voted to give her a cushy retirement, granting her “the privileges of an in-pensioner of Greenwich Hospital.”

Dr. Samuel Johnson heard of this goat, and composed a Latin epigram for her. It is reported that she wore the poem engraved on a silver collar around her neck. Here is the poem:

Of which Boswell gives this expansive translation:

In fame scarce second to the nurse of Jove,
This Goat, who twice the world had traversed round,
Deserving both her master’s care and love,
Ease and perpetual pasture now has found.

Though the Admiralty granted her such a generous reward for her work, the goat did not live very long after coming back to England. She perished on this day in 1772. She is certainly among the most famous, the most lauded, the most appreciated of history’s many milk goats. There is also historical fiction about her: The Goat Who Sailed the World.

But we don’t even know her name, if she had one.