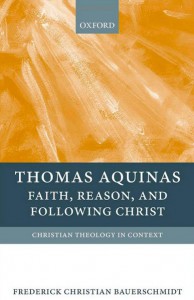 The first helpful theological tool I found in Bauerschmidt’s version of Thomas Aquinas was an approach to teaching summed up in the motto contemplata aliis tradere.

The second thing, even more helpful and of even broader application for contemporary theological work, is the scope and clarity Bauerschmidt gives to the category of fittingness, or convenientia. If the caricature of Thomas is that he is primarily a philosopher, mainly an Aristotelian, principally a metaphysician, then categories like necessity will come to the foreground. Indeed, in various waves of interest in Thomas, from the generation of Suarez and Cajetan to now, great emphasis has been laid on necessity, and on Thomas’ development of nascent rules for analogical predication. Bauerschmidt shifts the emphasis to covenientia, which he points out is “important in Thomas’ theology, particularly when dealing with the events of salvation history.” (161)

Bauerschmidt points out that fittingness “offers a form of reasoning that is in a way suppler than that of the syllogistic demonstration and which reveal what might be called an ‘aesthetic’ dimension to Thomas’ theology.” (161) What he has in mind shows up especially in the series of articles on events in the life of Jesus: why did the messiah come so late in salvation history, but not at the very end? Why did he die a violent death? Why the virgin birth? Etc. There was a long tradition of raising these questions and answering them with elaborations of how eminently fitting it was that God should do what he in fact did. Athanasius’ On the Incarnation proceeded thus, and so did Anselm’s Cur Deus Homo. Thomas takes up this traditional tool of convenientia and hones it considerably. “Arguments ex convenientia are a way of displaying the ‘necessity’ of the events of salvation history,” Bauerschmidt explains, but he has scare quotes around “necessity” and he quickly makes a distinction in different meanings of the word.

But arguments ex convenientia are quite appropriate in this sphere: insight “is not arrived at by the discursive progress of the syllogism, but by the holistic insight in which we see the ‘rightness’ of salvation history.” (161) Syllogistic argument from necessity lets us see the binding connections between two things, like using geometric argument to see the implications of axioms. But argument ex convenientia lets us see how the thing itself holds together, analogous to seeing how a piece of architecture works.

These arguments ex convenientia have wide application throughout Thomas’ work, and Bauerschmidt has an especially helpful section explaining how they shape Thomas’ presentation of the doctrine of the Trinity, which turns on whether “procession” is the kind of thing it is fitting, conveniens, to ascribe to God. But arguments ex convenientia come into their own in telling the reasons for the gospel story. Human reasoning, according to Thomas, is “utterly incapable of demonstrating the truth of the mysteries of faith, such as the incarnation or salvation through the cross of Christ.” (162)

I find Bauerschmidt’s account of fittingness in Thomas’ thought to be highly suggestive. It is the kind of motif that needs only to be pointed out and named in order to be thereafter observable all throughout the field of theology. In the locus of trinitarian theology alone, to which Thomas gave massive attention and to which Bauerschmidt also gives much, arguments ex convenientia enable theology to navigate a number of narrows and rapids that have sunk lesser crafts in recent decades. Much of the confusion generated by the Rahnerian style of radically economic trinitarianism could have been much better handled if the role of fittingness arguments had been recognized and respected.

With such a framework in place, may we not have bypassed the problematic, strong necessitarian arguments of “Rahner’s Rule,” and said instead that the economic Trinity fits the immanent Trinity?