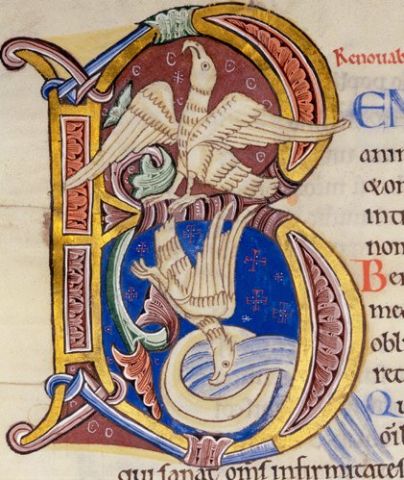 The 103rd Psalm comes pretty close to perfect praise. It seems to be built around the quotation of God’s own self-description from Exodus 34,

The LORD, the LORD, a God merciful and gracious, slow to anger, and abounding in steadfast love and faithfulness, keeping steadfast love for thousands, forgiving iniquity and transgression and sin, but who will by no means clear the guilty…

In this illustration from page 274 of the 12th-century St. Alban’s Psalter, the artist has picked out the image of the eagle from verse 5, in which God is said to “renew your youth like the eagle’s.” The artist has seized on the most striking visual image in the Psalm for his illustration, and it’s not a bad picture of the spiritual movement enacted by the Psalm itself: In this Psalm, the soul is acutely conscious of its downfall, and rises up to praise God and contemplate his goodness.

Warming up to comment on this Psalm, C. H. Spurgeon said that “As in the lofty Alps some peaks rise above all others so among even the inspired Psalms there are heights of song which overtop the rest.” What especially drew Spurgeon’s admiration is the fullness with which the Psalm describes the salvation that the soul should praise God for: Not content with the exhortation, “Forget not all his benefits,” this Psalm goes on to count those many blessings:

who forgives all your iniquity,
who heals all your diseases,
who redeems your life from the pit,
who crowns you with steadfast love and mercy,
who satisfies you with good
so that your youth is renewed like the eagle’s.

Spurgeon notes a kind of logical order in the listing. First comes forgiveness: “Till iniquity is forgiven, healing, redemption, and satisfaction are unknown blessings. Forgiveness is first in the order of our spiritual experience, and in some respects first in value.” Calvin had noted the same thing in his commentary on the passage:

It is not without cause that he begins with Godâ€™s pardoning mercy, for reconciliation with him is the fountain from which all other blessings flow. Godâ€™s goodness extends even to the ungodly; but they are, notwithstanding, so far from having the enjoyment of it, that they do not even taste it. The first then of all the blessings of which we have the true and substantial enjoyment, is that which consists in Godâ€™s freely pardoning and blotting out our sins, and receiving us into his favor. Yea, rather the forgiveness of sins, since it is accompanied with our restoration to the favor of God, also sanctifies whatever good things he bestows upon us, that they may contribute to our welfare.

But forgiveness, while “first in the order of our spiritual experience, and in some respects first in value,” is not the whole story of salvation. Spurgeon exults in the “full gospel” proclaimed in Psalm 103:

Our Lord does nothing by halves, he will not stay his hand till he has gone to the uttermost with his people. Cleansing, healing, redemption, are not enough, he must needs make them kings and crown them, and the crown must be far more precious than if it were made of corruptible things, such as silver and gold; it is studded with gems of grace and lined with the velvet of lovingkindness; it is decked with the jewels of mercy, but made soft for the head to wear by a lining of tenderness.

As Isaac Watts puts it in a hymnification of this Psalm,

Bless, O my soul, the living God,
Call home thy thoughts that rove abroad,
Let all the powers within me join
In work and worship so divine.

Bless, O my soul, the God of grace;
His favors claim thy highest praise:
Why should the wonders he hath wrought
Be lost in silence and forgot?