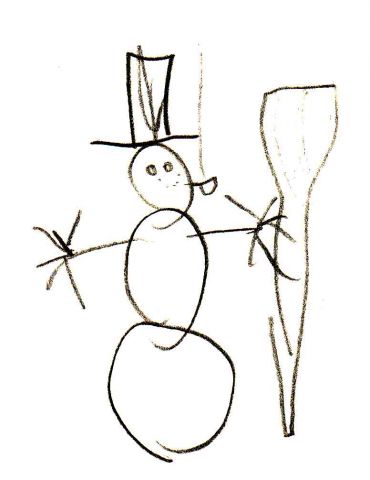 Frosty Theophilus Snowman has melted away due to natural causes near The Village, just a few days after causing a major public disturbance. His exact age is unknown, but friends estimate that he was at least 57 years old.

Frosty, remembered by friends as “a jolly, happy soul,” outlived his creators, Walter “Jack” Rollins, Gene Autry, and the Cass County Boys. He is survived by Rollins’ other offspring, Frosty’s half-brother Peter Cottontail and adopted brother Smokey The Bear. Bear was unavailable for comment, but Cottontail remarked, “hippity hoppity.”

Many local residents were surprised to find out that Mr. Snowman was in fact real. “Frosty The Snowman is a fairytale,” said some older residents of The Village. Local youth, however, were certain that Mr. Snowman had been “alive as he could be.” “Heck,” said one little girl, “he could laugh and play just the same as you and me.” Mr. Snowman was often seen in the company of children here and there about the square. His taste in clothing was described as eccentric, and included a well-made silk hat purchased at second hand. His eyes were coal black and his nose, widely mis-reported to be a carrot, was in fact a large, orange button. He was a heavy smoker.

Though Snowman spent most of his brief life dancing around, he also styled himself something of a village philosopher. His personal philosophy was focused on the great tension he experienced among three factors of existence: First was the joy he felt in life itself, second was the briefness of life, and third the demands of social convention and law. The tension could lead to volatile behavior, as it did in the mayhem surrounding the final days of his tumultuous life. Snowman’s final days were marked by a burst of corncob-fueled activity that was reported by local news media as a kind of mobile party that began in the hills above The Village and ended in a tense standoff with local authorities. “I hollered ‘Stop,’ but he only paused a moment,” said the police officer who tried unsuccessfully to calm Snowman down. Snowman had become agitated, and was running here and there with a large wooden club of some kind, possibly the broken handle from a shovel or broom, yelling “Catch me if you can!”. Friends warned him that the sun was too hot for such exertion from a person made out of snow, but Snowman angrily waved aside their objections. “I know the sun is hot,” he said, implying that the heat of the day was the whole reason for his behavior. “We’ll have some fun NOW,” he growled, “before I melt away.”

He kept repeating the phrase, “thumpety thump thump.” There is no consensus about what he meant by this ominous phrase.

The awkward incident was resolved when Snowman ran away alone over the hills of snow, vowing to return, either “some day” or as other witnesses report, “on Christmas day.” He did not in fact return, and a local farmer found a silk hat in the fields behind his barn two days later. Under that hat was a corncob pipe, two lumps of coal, and an orange button. Snowman was pronounced dead at the scene, and a brief memorial service was held in the village the next day.