People in general are not born with amazing intellectual or physical giftedness. I continually have to remind myself of this. Most individuals have to work very hard to attain the level of excellence that we admire. Our culture reinforces this belief about natural abilities with language of giftedness–as if some “talent fairy” is throwing around skills in a way that is totally random and completely outside of our power to obtain on our own. It is not that some people are not better at some things than others, but that they too need to work hard at developing their abilities. Even if there are one or two exceptions to this rule and some are born “gifted,” I would like to quote writer Annie Dillard who said, “There is no call to take human extremes as norms.”

Watching someone who is excellent at what they do naturally draws our attention. Whether it is an academic endeavor or athletic competition someone who is outstanding at their work is admirable. One of the odd things about the human condition is that we often desire to be outstanding in what we do without the commensurate effort, and when it does become difficult we look for reasons to excuse our desire to quit, such as our lack of natural giftedness. 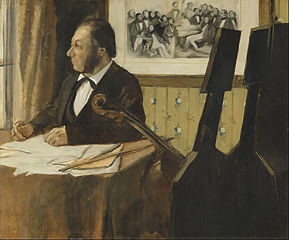 We hear from a young age, “She is such a natural at math,” or “He plays the cello effortlessly.” All that this does is categorize certain skills in terms of the “haves” and “have nots.” We say things such as, “I am really not gifted at math” or “I just don’t have the ear necessary to play a musical instrument.” This enables us to have “built-in” excuses to not pursue a skill we don’t find to our liking or takes too much time, and yet it is often this belief in giftedness that falsely determines how we pursue our endeavors.

I find that many of the individuals I come into contact with are far too willing to give up on intellectual pursuit because they don’t have the discipline to stick to it when it gets difficult. How can we encourage our culture to understand that being a responsible human means that we need to not just pursue what we desire, but what is best? We want all the benefits of adulthood without all the accountability. We would like to be as good as Yo-Yo Ma at the cello, but cannot imagine putting in the time to even begin to learn to read music let alone play the cello well.

This pernicious attitude has permeated the halls of higher education. Students falsely believe that some people can just write and others cannot. Even though some of the best writers in the world say that writing is about rewriting over and over again, students think that they should be able to write like Faulkner or G.K. Chesterton on their first attempt. They think that they should be able to understand the complexities of the French Revolution by reading one textbook or the fractal geometry after one lecture and homework assignment. The expansion of one’s understanding of a subject necessitates deep longsuffering attention to asubject–not a cursory look at it. Jacques Barzun, Professor of History at Columbia University, and one of the best intellectual minds of the 20th century, states in his book Teacher in America,

All subjects have their fine points, and letting the careless ride roughshod over them is doing a poor favor to the subject and the students. It is not enough to say that when the subject matter is interesting the pupil will be interested and will attend: every branch of learning involves drudgery and it is there that attention is required. A blunder is harmless; it almost corrects itself, but repeated falling away from precision through scatterbrains is like adulteration of food–less nourishment, possible danger, and invariable bad taste.

Intellectual pursuit demands diligence and responsibility. A couple of years ago world class pediatric neurosurgeon Fred J. Epstein died. What makes his story remarkable is that he had dyslexia. He was told he was told that he was stupid and would be unable to ever make it into medical school. Because he refused to quit and was loved by his family he became a leader in pediatric neurosurgery. He pioneered a surgical technique that enabled doctors to remove tumors from spinal cords and brain stems that before his innovations were considered to be inoperable. Clearly, he was anything but gifted, and, yet, without this determined man many children would not have survived these life threatening conditions.

We need to instill in ourselves and our children that understanding is a result of mining the intellectual subject until our hands bleed from digging into the subject. There is no quick fix, intellectual giftedness or computer program that will replace a refusal to admit intellectual defeat and tenaciously pursue mastery of an idea. It is the only responsible thing for us to attend to.