There’s a little song called God Went Bowling by a band called the Swirling Eddies. It was on their 1994 album Zoom Daddy, and it features an oompah beat driven by accordion. Over it all is the snide vocal of Terry Scott Taylor, the songwriter whose mad genius has found outlet via at least three bands (Daniel Amos, the Swirling Eddies, and the Lost Dogs) and a solo recording career.

Somewhere around 1999 I did a set of ten illustrations for the song. I can’t quite remember why, except that I had bought a new rapidograph pen and a cartridge-fed ink brush and was looking for a chance to try them out on more than just doodling.

The song is already weird enough in its own right, like some kind of half-thought-out theodicy in waltz form with an alterna-rock sensibility. And the lyrics are all over the place, riffing on Shakespeare and the Bible, punning on bowling lingo one minute and declaring that  God “hangs on the cross with the rest of creation” the next, mingling high pronouncements and low slang indifferently.

But then in the illustrations I added a few more layers: the role of God is played by the Christianized Jupiter of Michelangelo’s Sistine Chapel ceiling, wearing a bowling shirt. I’m not sure why; it made sense at the time. I picked out a few of the fresco images that I thought would go well with the scenes evoked by the lyrics. Veggie Tales and Peanuts, among other things, show up in the backgrounds.

Here are the nine illustrations, for your viewing pleasure. And below that are two videos that I did not make: the first uses my illustrations (even adding some spot color!) along with a bunch of other images as an accompaniment for the original Swirling  Eddies recording. If you want to hear the song, that may be the easiest way. The second video uses only my illustrations, but the audio of it is a cover version of the song by a fellow who goes by the name Big Dork, a swell super-fan of the band, and someone I’ve had the pleasure of meeting. 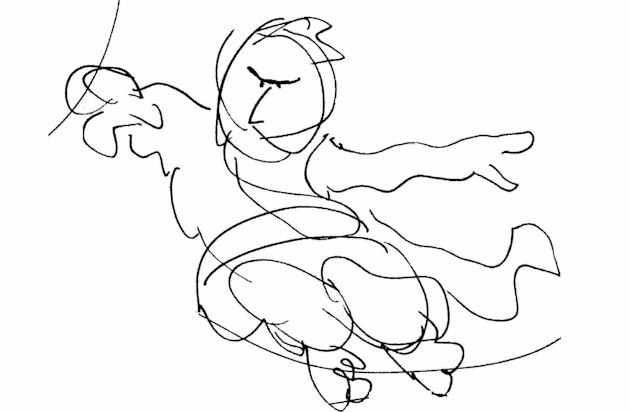 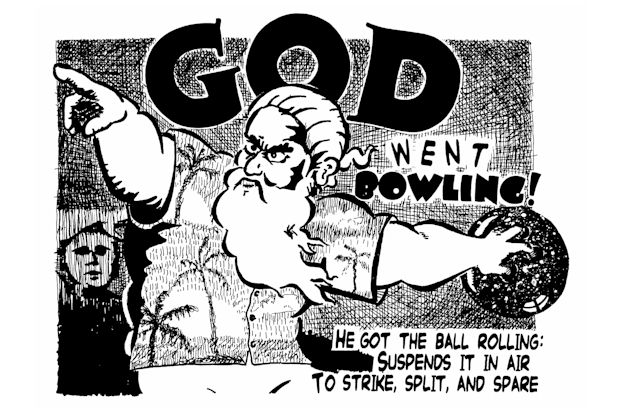 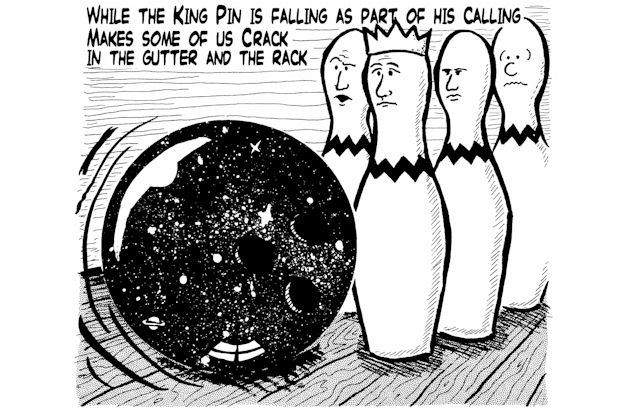 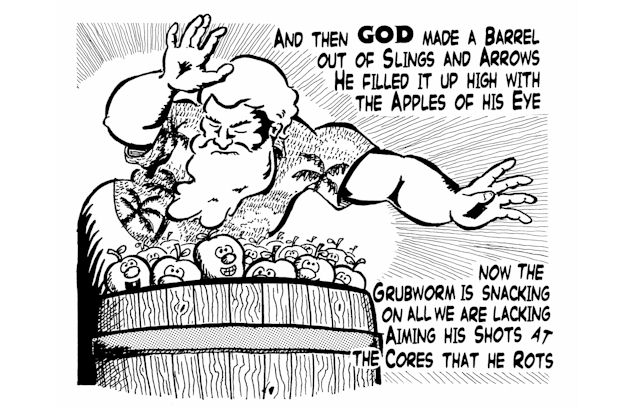 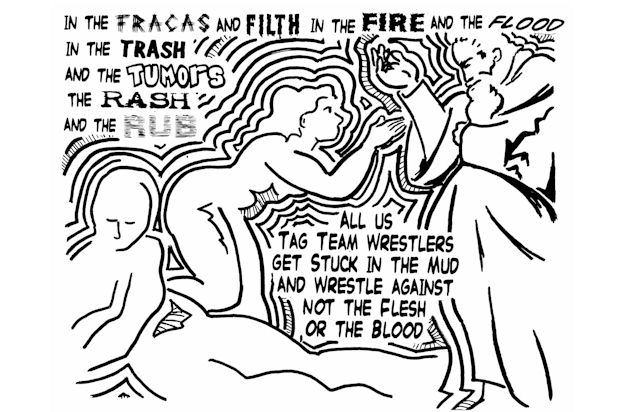 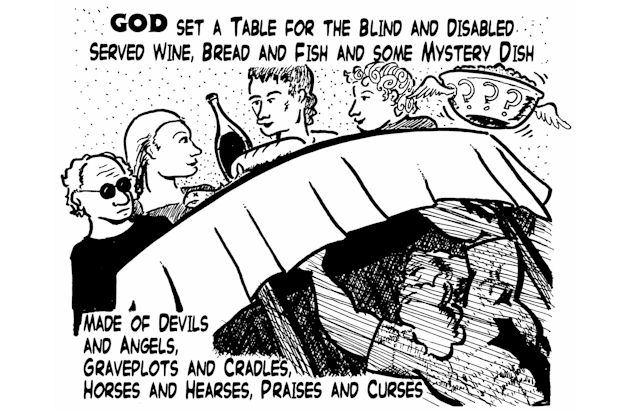 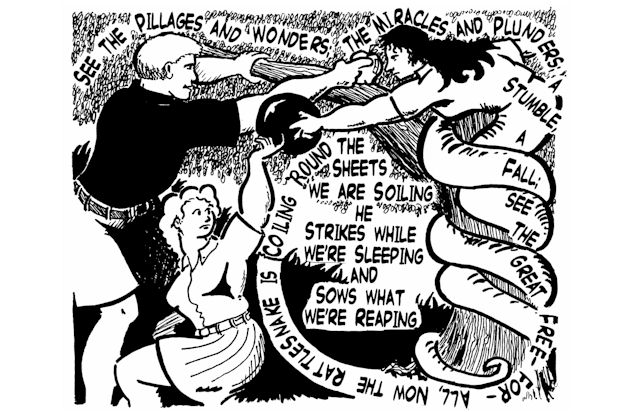 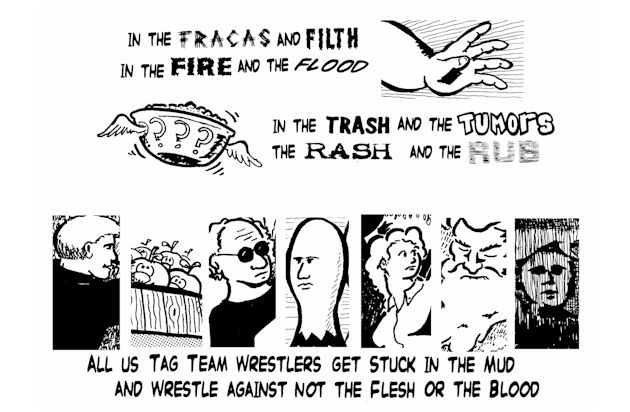 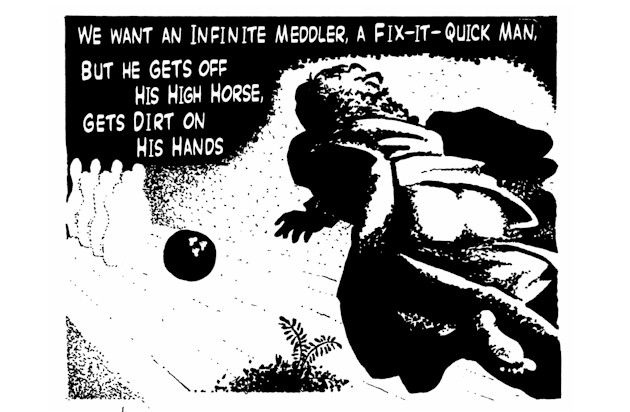 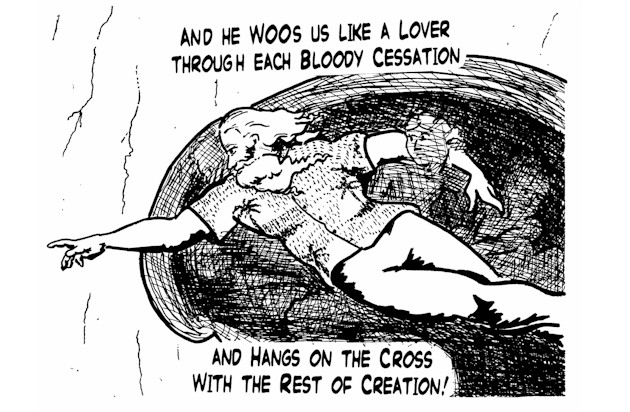 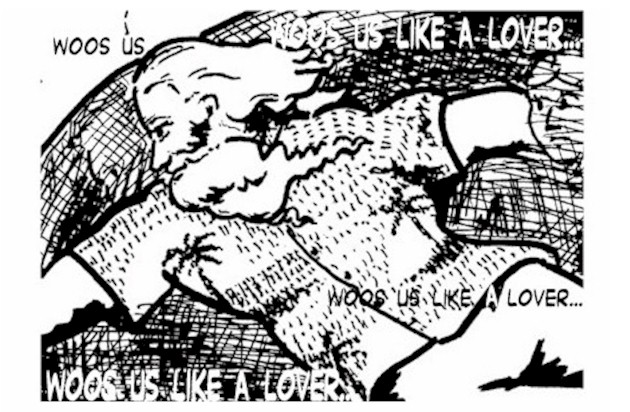 These images were floating around the internet somewhere, and a couple of people thought it would be a good idea to sync them with the music.

First is a weird one that uses other images and dropped in spots of color:

Second is a video that uses only my images, but the audio track is a fan cover of the song by superfan BigDork.