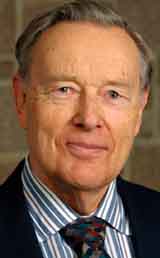 In late July, theologian Gordon Kaufman died. His death is noted by Harvard Divinity School, where he taught for over 45 years. “The depth and scale of Kaufman’s work, and his placement at Harvard,” noted Gary Dorrien in 2006, “made him the leading theological liberal in the estimation of many observers. Often he was cited as representing the liberal option.” (Dorrien, The Making of American Liberal Theology vol. 3: Crisis, Irony, and Postmodernity, p. 322).

It wouldn’t be fair to either Kaufman or to liberal theology to call him the liberal option. One of Kaufman’s primary theological goals was to operate with total freedom from doctrinal authority, and without any binding tradition. So his work was necessarily singular, if not idiosyncratic. Nevertheless, he did exert tremendous influence on liberal theologians in the late twentieth century, and in at least one area he was a good representative of the liberal project. Kaufman described theology as an act of the constructive imagination, as opposed to a receiving of revelation. Reading Kaufman’s reflections on theological method was another sort of revelation to me: it revealed the driving force of the liberal theological task as a whole.

Kaufman’s rejection of revelation was not novel in liberalism, and plenty of theologians in that tradition have approached theology as imaginative construction. But Kaufman’s work was admirable for its clarity and straightforwardness. His essays and books throughout his career revealed a mind struggling to name and give shape to incipient processes of thought, and he pushed relentlessly to eliminate all obscurantism and evasiveness from the type of theology he was describing and practicing. His style is marked by programmatic statements and descriptions of his own motives and intentions.

Kaufman began his reflections on imagination’s place in theological method with a distinctive reading of the history of theology:

I have become persuaded that theology is (and always has been) essentially a constructive work of the human imagination, an expression of the imagination’s activity helping to provide orientation for human life through developing a symbolical “picture” of the world roundabout and of the human place within that world. In the course of history the fertile human imagination has generated, in the great religious and cultural traditions of humankind, a number of very diverse views of the world and of the human. Among these are the monotheistic perspectives –largely descendant from ancient Israel — in which the symbol “God” provides the ultimate point of reference and orientation for human life, indeed for understanding all of reality. (Kaufman, The Theological Imagination: Constructing the Concept of God (Philadelphia: The Westminster Press, 1981), p. 11-12.)

Theology, according to Kaufman, finds its home within the general imaginative activity of humanity. The human mind constructs worldviews, and some of these worldviews include a God as the ultimate reference-point by which reality is comprehended.

If there’s a slippery bit in Kaufman’s work, it is here: You have to pay attention to the difference between God and “God.” “God” (in quotes) is a symbol, a mental tool made up of image and concept. It points to God, which is some reality that you can only point to but never know. “God” is a symbol for God, and it is “God” that we are dealing with in theology, according to Kaufman. The God/”God” distinction is crucial, and became a rule of usage in Kaufman’s work: He wrote to Gary Dorrien in 2005, “I may have slipped up a time or two, but I have tried to follow that convention carefully” (Dorrien, p. 591).

So “God” is a symbol (made up of image and concept) which humans make and use is central to Kaufman’s thought. He makes a critical, neo-Kantian distinction between what he calls the available referent and the real referent of the term “God.”

All realities indicated by words have these two different referents: If I describe my hometown (let’s call it Mayberry) to you well enough, you will construct a mental picture of it. This mental construct is the available referent of the word “Mayberry,” and any time you think of Mayberry it is to the available referent that you have access. But there is also a real referent to the term “Mayberry,” and it is a town in such-and-such a state, to which you could drive if you had the inclination.

With the term “God,” the distinction between real and available referent is vastly more important, since nobody has access to the real referent of the term (in this life, at least). It is therefore always the available referent with whom we have to do, according to Kaufman:

It is the “available God” whom we have in mind when we worship or pray; it is the available referent that gives content and specificity to any sense of moral obligation or duty to obey God’s “will”; it is the available God in terms of which we speak and think whenever we use the term “God.” In this sense “God” denotes for all practical purposes what is essentially a mental or imaginative construct. This does not mean, of course, that believers directly pray to or seek to serve some mere idea or image in their minds — that would be the crassest sort of idolatry; it is rather that what their images and ideas are of is the available God, not some utterly unknowable X. (From “God as Symbol,” in God the Problem (Boston: Harvard University Press, 1972), p. 85-86.)

It was a short step in Kaufman’s thought from description to prescription; from his analysis of what theology “is and always has been” to his affirmation that this is how theology should be carried out. He called on theologians to undertake their work in full cognizance of the fact that they are critically refining a concept of God which earlier generations have crafted and handed down. “Theology,” he said, “should now be conceived as essentially the attempt to construct imaginatively a theistic worldview.” (“Theology as Imaginative Construction,” The Journal of the American Academy of Religion 50:1 (1982), p. 78.)

Theologians, on this theory, have a daunting task. They are to fashion a concept of God and his relation to the world, critically refining the concepts they have received from earlier theologians, who in their own times and places constructed their theologies imaginatively.

The question arises immediately: what are the criteria for success in this venture? How will theologians know that they have crafted an adequate God-concept? Kaufman tended to use the idea of “humaneness” as his guide (indeed, it is the second person of Kaufman’s Trinity, composed of Absoluteness, Humaneness, and Presence). God is the force which has made and continues to make human life possible, and is in some way associated with a benign evolution and the anthropic principle which has constructed a home for humanity on the earth. Ultimately, Kaufman opted for a very pragmatic standard of evaluating theologies: if a theology preserves life, it is good.

In his later work, Kaufman used the term “creativity” as a kind of ultimate criterion, thinking of God (or “God;” I’m not good at observing the distinction) as creativity itself. Thus a writer who had confessed that he was “tone-deaf” about religious experience (“When others speak of their ‘experience of God,’ or of ‘God’s presence,’ or the profound experience of ‘the holy’ or of ‘sacredness,’ I simply do not know what they are talking about.”) and who decisively rejected “the personalistic conception of God” (“so powerfully presented by the traditional images of Christian and Jewish piety… less and less defensible in face of the issues humanity today confronts”), confessed a hope in the “God”-world matrix itself: “In the beginning was creativity, and the creativity was with God, and the creativity was God. All things came into being through the mystery of creativity; apart from creativity nothing would have come into being.”

With this fundamental methodology, where does the liberal project go? Does creativity become flesh? Is there sin and atonement? Kaufman answered these questions, and the resulting system (see his definitive book, In the Face of Mystery) is obviously, openly different from traditional Christianity on every point.

Kaufman’s approach to theology was explicitly not based on revelation. He was insistent that theology was to be carried out as an act of the constructive imagination, which forced the possibility of revelation out of theology, taking its place, and assigning to all the concepts and doctrines of the Christian faith a brand new content.