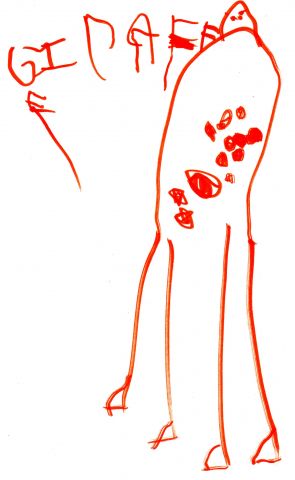 Here is a drawing of a giraffe by Phoebe Age Five. It conspicuously omits the main thing that we would expect to see in a giraffe image. Surely by its long neck shalt thou know the cameleopard; and if the neck be shortened unto vanishing, how shall it then be known?

The drawing includes some excellent observations about giraffes: aside from the choice of bright orange as the proper color, we have the perfect spots perfectly placed, and those big giraffey hooves at the end of long skinny legs. I know I have seen that sauntering gait on the Discovery Channel. And there’s something about the improbable body mass that succeeds in calling to mind the hunch and sway of a giraffe’s torso. As professional art critics say, “That’s good stuff!”

But then we have the necklessness, a real problem for the image. How could an artist with such powers of observation and obvious refinement of mark-making leave off the characteristic long neck? I have no way of knowing, fellow connoisseurs, but here are some possibilities:

1. The word GIrAFF/E might be intended to serve as the neck, swooping out from the body with its head pointed down. This would be a bold mix of typography and contour drawing, but not necessarily beyond the experimental powers of an artist who has frequently demonstrated her idiosyncratic take on the world. This is an attractive option. However, since I was present when the image was constructed, I can testify that the image was pronounced complete even before the word GIrAFF/E was added (at my request, I admit).

2. Foreshortening of the horizontal kind. The artist may be portraying a giraffe who is bending over and extending its neck far forward, away from the viewer. Realistically rendered, such a giraffe would appear to have no neck.

3. Foreshortening of the worms-eye view kind. The viewer may be looking up from those enormous hooves, past the long legs and massive torso, up up up to the head that surmounts the long neck. From such a perspective, most of the neck would vanish and the head would appear right on top of the body.

4. Maybe she ran out of paper, oKAY? That the artist is susceptible to such problems is suggested by the way the word GIrAFF/E bumps into the drawing and has to wrap around to start again on the left. Planning ahead to leave the right amount of space is a different skill set from the skills so obviously manifested here. When this artist acquires that skill, her work will go to A Whole New Level.