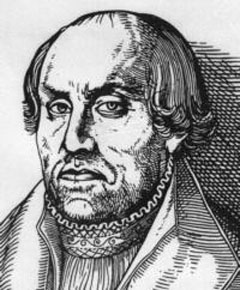 Too many people think of the Reformation as a one-man show, with Martin Luther starting everything by himself. But even if you stick to the first generation of the Reformation, and confine yourself to Germany, there were still a lot of faithful and creative people involved at all levels of reforming the church. Consider Friedrich Myconius (1490-1546), who was born on this day (December 26, the Feast of St. Stephen).

Myconius joined with the Franciscans at age 20, in July of 1510. The night he entered the cloister, intending to become a monk, Myconius had a weird and vivid dream. He was wandering along through a vast wilderness, when a guide showed him the way to a stream. But the guide would not let him drink of the stream, pointing him instead to the fountain that was its source. When Myconius went to that fountain for a drink, he found Jesus, with wounds that were the source of the stream. After drinking his fill, Myconius found himself in a field, working so hard at harvesting grain that it was wearing him out. He longed to rest, but the sense of urgency drove him to harvest faster and faster. When he finally stopped to rest, the guide pointed out to him that the crucified Jesus was at his side, and told him, “You must be conformed to him.”

What all of this seemed to mean for young Myconius at the moment, on the verge of Franciscan monasticism, is hard to say. But as the events of the next few years developed, his strange vision seemed to point to a way for him to go straight to the source of the Christian life, and to find meaningful work to do. For one thing, he became exasperated with the indulgence-peddling of Tetzel, the same indulgence salesman that Luther was to oppose soon (One of our best reports of Tetzel’s behavior comes from Myconius’ description). For another thing, he worked diligently through late medieval theology and learned more from Augustine than the rest of the fathers, and even more than that from the Bible itself. He was ordained to the priesthood in 1516.

And then he heard the teaching of Luther, confirming what he was already beginning to understand, and his vocation as a reformer became clear. Myconius threw in his lot with the Reformation, pastoring, teaching, and reforming in a number of German towns. He wrote only a few things, but he worked hard as a teacher and planner. Myconius signed the Schmalkald Articles and traveled to England to meet with Henry VIII himself (they didn’t get along, though Myconius was quite impressed with some of the English theologians).

Few characters of the Reformation appeal to the sympathy as strongly as does Myconius. Like Luther, he had attained the light and truth of the Gospel by personal expeirence. His character had been firmly fixed early in life and oculd not be unsettled by the theological disputes and opinions of the time…. The purity of his character was undisputed and secured him the respect of friend and foe.