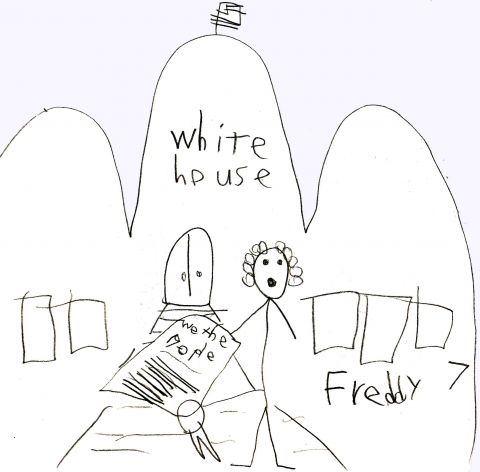 This image features a George Washington figure recognizable by his white wig and numerous subtle features. The simple drawing merits close comparison with a standard portrait of Washington.

Close attention has obviously been given to the individual features of the subject’s face, but the artist has imposed a relentless abstraction on these features, assimilating each of them to the simplest closed form, the circle.

Fourteen circles make up the face of the father of his country, or thirteen hang on his head like the colonies depending on his personality. But personality is not what this artist is focusing on. His simplification of Washington’s face is a bold abstraction which makes it clear that “Washington” does not mean Private Citizen George Washington. He holds in his hand a document, an idea, derived from self-evident truths, on which a nation is ordained and established.

Two visual bands contain most of the important information in the composition: the main one is a vertical band running down the middle third of the drawing. Here the artist has placed, from top to bottom, first the flag, then the central lump of his Gaudi-esque white house, then Washington himself, next the constitution, and finally the steps and the turf of the country itself.

The other axis on which the picture turns is the horizontal band running through the middle of the image. This one captures the doors and windows of the white house, the only remotely rectilinear elements of the architecture, with Washington and the constitution standing out in front of them. He is curvilinear personality, the windows and the document are rectilinear institutionality; the regular progression of windows is continuity, while he is circular selfhood.

Either way you slice it, at the center is a dense juxtaposition of the man, the document, and the door. The form of the door combines the squareness of the document with the roundness of the human figure. Shall we not go through this door, my fellow Americans?