Lightfoot’s strict classical training (Trinity College, Cambridge) equipped him for what turned out to be his life’s work in an uncannily providential way. In all his scholarly work, it has been said that “he was essentially a historian, and he dreaded losing himself in textual criticism and linguistic interpretation. He wanted to see the man who wrote those letters and to portray the period in which he lived.”

As a historian with finely-honed Greek skills and wide reading, Lightfoot took up the challenge of his day:

It so happened that the most serious attack on Christianity which its defenders had to meet in the [eighteen-] sixties was on its historical side. The Tubingen school, under the leadership of Ferdinand Christian Baur, had rewritten the early story of the Church on the hypothesis that St. Paul was at daggers drawn with St. Peter and the other leading Apostles, and that most of the books of the New Testament had been written to conceal this fundamental opposition between the Apostle of the Circumcision and the Apostle of the Gentiles. Only three of the Pauline Epistles were undoubtedly genuine and trustworthy. Above all, the Acts of the Apostles was the most brilliant and successful of forgeries.

Lightfoot attacked these views with everything he had, and he happened to have everything he needed. Along with a few close collaborators, he undertook the project of demonstrating the authenticity and accuracy of the New Testament. He did this partly through close commentary (see below), partly through critically undermining the presuppositions of his opponents, and partly through drawing the connections between the Apostles and the earliest post-Apostolic Christian writings to come down to us: the “Apostolic Fathers” of the second century. Lightfoot considered his editorial work on the letters of Ignatius of Antioch to be among his most important contributions to the historical defense of the faith. The skeptical critics had succeeded in building a scholarly consensus that dated many New Testament books well into the second century, as forgeries. By gathering actual second-century documents, establishing more solid dates and extending greater scholarly insight into these earliest post-Biblical church fathers, Lightfoot forced the documents of the New Testament back across the century mark, decade by decade. The details are, as you would imagine, awfully detailed. But the accomplishment was substantial. 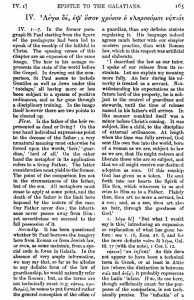 As for Lightfoot’s biblical commentaries, they are marvelous, and still useful today, though they require knowledge of Greek to negotiate at all, and use a lot of Latin along the way. One scholar has said of his first commentary, on Galatians (published 1865),

was a landmark in New Testament exposition. It broke fresh ground: largely in its form, which set a pattern for future Commentaries, and wholly in its lucidity, directness and moral and devotional application. It was recognized as a new thing. Two others followed on Philippians, and Colossians with Philemon.

Lightfoot’s pattern-setting form was to print a line or two of the Greek text at the top of the page, and then comment below it in two columns of dense fine print. And that fine print is full of insight. Paraphrase, metaphrase, explication, and more is there. Lightfoot had a stunningly good education, and could cite pagan and Christian literature of all kinds from all ages to illuminate the text of Scripture.