Here are some major events from Edwards’ life, as chronicled here at Scriptorium in the last few years.

Before 1723: He wrote a treatise on spiders: “Of all Insects no one is more wonderful than the Spider especially with Respect to their sagacity and admirable way of working.” And I did a cartoon version of it, taking plenty of liberties. Picture a very young Edwards playing with bugs. Sort of like Edwards and Hobbes. No, Calvin and Edwards. No, that’s too confusing.

July 8, 1741: He preached the famous sermon, “Sinners in the Hands of an Angry God. “…he employs no less than twenty metaphors or descriptive adjectives to express God’s wrath and hell’s torments. The metaphors include a pit, an oven, a mouth, a furnace, a sword, flames, a serpent, a troubled sea, black clouds approaching, waters dammed by a floodgate, a bow bent with an arrow ready to be “made drunk with your blood,” an ax, and a heavy load that cannot be held.” 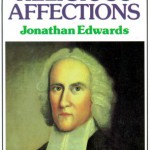 1746: He published his masterpiece, The Religious Affections. Edwards lived through the giddy phase of the Awakening, weathered the backlash against it, and then wrote a balanced assessment that has become a classic. You should read it. “But if you can’t make time for the whole thing, here is a reading guide. It gets the reading assignment down to 125 pages, arranged in 7 bite-sized portions of about twenty pages each –ideal for book discussion groups.”

June 22, 1750: He gets fired from his pastorate after 23 years. Marsden: “The scene of America’s greatest theologian and colonial America’s most powerful thinker being run out of town and forced into exile in a frontier village has intrigued observers ever since.” 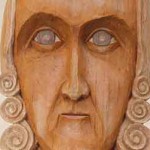 March 22, 1758: Edwards died. His wife Sarah said: “A holy and good God has covered us with a dark cloud! …The Lord has done it. He has made me adore His goodness that we had him so long. But my God lives: and He has my heart. Oh, what a legacy my husband and your father has left us!”