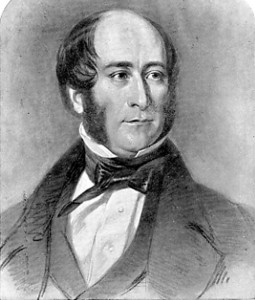 Today (August 14) is the birthday of Samuel Sebastian Wesley (1810-1876), an English composer of church music. Wesley was a musician’s musician, with strong opinions about the number of pedals on the organ, the quality of Anglican music, the training of vocalists, and precisely how to combine tradition and innovation.

To hear what he was capable of, check out his “Blessed be the God and Father,” a powerful setting of words from the first chapter of First Peter. Seriously, go listen to it now, it’s great. Take eight minutes to celebrate SSW’s birthday and praise the Lord.

By the way, there are at least four Samuel Wesleys to keep track of in church history, and they’re all related. The way to remember this one is his middle name: Sebastian. Yes, his father was so crazy about the music of JS Bach that he named his son after him.

Here are the four Sam Wesleys you’re most likely to run into:

2. Samuel Wesley the Younger (1690-1739), pastor and poet. He’s the least famous of the four, though in any other family than the super-high-achieving Wesley family, he would have stood out. High-church Anglican, not thrilled with that Methodist stuff his kid brothers were pulling. This Sam and his wife had no surviving male children to name Sam.

3. Samuel Wesley (1766-1837), the second son of Charles Wesley. What do you do if your dad is The Great Charles Wesley, composer of a zillion hymns and a world-changing spiritual influence? Well, this Samuel was a child prodigy (“a second Mozart!” exclaimed a contemporary) who grew up to revive the reputation of Bach in England. He also, to the perpetual grief of his father, flirted with Roman Catholicism (he seems to have converted because they had better music, ouch, and then later sort of deconverted), lived with a woman without marrying her, then married her and ran off with his teenage maid and had a lot of children. And one of those children was: