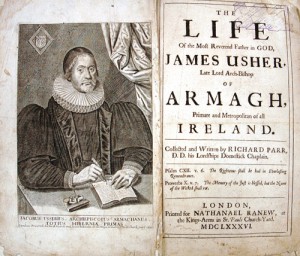 Today, October 23, is the day the world was made, a little over six thousand years ago. It was a Saturday night. It happened late in the day, at the time of day we would call nightfall once there was a night to fall.

Archbishop James Ussher, Anglican Bishop of Armagh, is remembered these days chiefly for the world chronology in which he did a lot of things, including cipher out this date: Annales veteris testamenti, a prima mundi origine deducti (Annals of the Old Testament, deduced from the first origins of the world), which he published in 1650.

What was his chronology? The short version is that he added together all the begats of the Old Testament and came up with an earth origin in the year 4004 BC. In October. On the night that turned into Sunday, October 23, and it was the first day.

Ussher excelled all previous attempts mainly by his precision and his encyclopedic learning: he correlated Biblical accounts with classical and Middle Eastern history, and with Jewish calendar systems. He made independent judgments about the superiority of the Hebrew text to the Greek translation of the Old Testament, about reconciling the Julian calendar to the Gregorian, and about anything else that got in his way. All in Latin, all festooned with quotations from classical authors.

The sheer erudition of Ussher’s work convinced many people, and then his dates made it into the margins and headers of a series of influential Bibles, from eighteenth-century editions of the King James Bible down to Scofield’s Reference Bible and beyond.

Ussher’s chronology is famous now because of controversies of our own time: His Annals are back in print because of young-earth creationist demand, and his dating of creation has of course been ridiculed in public ever since Inherit the Wind. But whoever wrote Inherit the Wind, I forget his name, is not worthy to carry Ussher’s scratch pad, and could not have hung half an hour with the painstaking translating, comparing, and calculating that the classically-educated Ussher accomplished. Even if (as I am inclined to believe) the earth is millions of years old, and the project of chain-linking the biblical genealogies doesn’t accomplish what Ussher thought it did, the man was a genius who worked assiduously on a meaningful project.