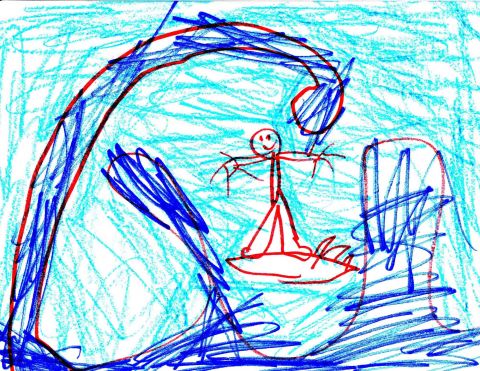 As John Ruskin says in his 1857 work The Elements of Drawing,
“Everything that you can see in the world around you presents itself to your eyes only as an arrangement of patches of different colours variously shaded.” To the eye of a painter, everything is color-patch bumping into color-patch. At the thin edge where some color patches bump into others, there is sometimes a stark color shift that we can represent, in simplified form, as a line. But usually that simplification is a falsification: most of the lines you think you see surrounding objects around you are really color or value shifts running along the horizon between color patches. The green on the hillside shifts in color as it approaches the blue sky above it; lighter, lighter, lighter, a bit darker, much lighter, POW! Blue sky. The same for the table top, and the same for your hand if you hold it up against a background. Try to find the line around your fingers, and be disturbed as Line Agnosticism spreads through your mind. (THERE ARE NO LINES!! LINES ARE DEAD!! screamed the madman in the marketplace at midday) Welcome to the boundless sea of visual experience.

Nevertheless, we all learn very early that a line is a useful fiction. Pick up a pencil, trace out a thin contour around an object, and you have successfully described the object. The artist known as Freddy Age Seven has been proficient in line drawings for years. Lines were for a long time his only concern as an artist, and even now they continue to dominate his work. As he matures artistically and expands the scope of his visual inquiries into the world, he has begun incorporating more color fields.

This new interest can be seen in his most recent work, Heavy Surf (8.5 x 11 inches, mixed media (crayon and marker) on white paper; private collection). It is a study of blue on blue, pitching aqua-turquoise crayon against royal blue marker. Sea meets sky along a fascinating and convoluted frontier in this image. The artist has not left the boundary to speak for itself in the clash of blue on blue, however. Instead, he has intruded a bright red marker and traced one long curving line to mark the boundary. It is an exquisite line, and calls to mind Ruskin’s remark, “I do not believe a perfectly trained hand ever can draw a line without some curvature in it, or some variety of direction. [Workmanlike British painter Samuel] Prout could draw a straight line, but I do not believe [acknowledged master] Raphael could, nor Tintoret. A great draughtsman can, as far as I have observed, draw every line but a straight one.”

This is no straight line! It was drawn in one uninterrupted swoop, as you can see by tracing its progress from the lower left, where the marker delivers a large quantity of ink, through the twists and turns to the right side of the page, where the line is raspy and fading. The waves which it contains are of three distinct kinds: first on the left is the large, classical wave-form which has tumbled over with a dollop at the crest; then in the middle a smaller wave toppling toward the left; and on the right, a soft-cornered brick of water more like a tall swell. Together, these three odd waves seem to spell the word “Go.”

Although the piece is obviously an experiment with a thin red curvilinear element contrasted against two blue fields, there is a delicious irony in the fact that the blue fields are themselves made of scribbled lines. To go one layer deeper, we can see that those scribbled lines are fat enough to be field-like in themselves, but to admit that would be to admit the presence of the white substrate underlying the total image. Though the artist invites us to ignore it, there is actually a great deal of white on this page. A careful census might even find that there is as much white as there is blue. Everything we are looking at is a contrast coating which stands out against that white background.

Hovering implausibly in the midst of this play of gigantic abstract forces: the human with his thin wafer of technology. The surfer, the artist, the child, the human. Look, Ma: Two hands, eight fingers, and a smile.

“The whole technical power of painting,” Ruskin says, “depends on our recovery of what may be called the innocence of the eye; that is to say, of a sort of childish perception of these flat stains of colour, merely as such, without consciousness of what they signify –as a blind man would see them if suddenly gifted with sight.” He goes on, “A highly accomplished artist has always reduced himself as nearly as possible to this condition of infantine sight.” I believe that when eh says “childish” and “infantine,” he really is talking about very young children, so young that they have not yet learned the abstraction of linear representation. Already at this stage of his career, Freddy Age Seven is beginning the arduous task of unlearning, and joining the artistic quest to recover the innocence of the eye.

Other works by the artist currently known as Freddy Age Seven can be viewed in our Avant-Garde section.