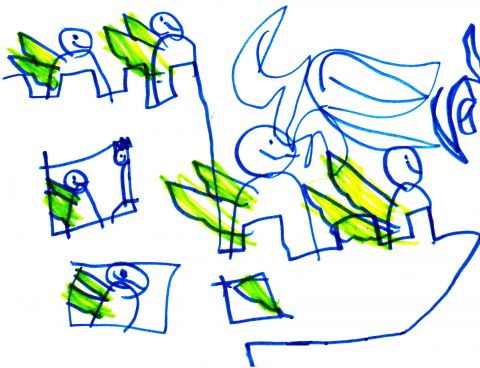 Freddy Age Six, by special request, delivers a vision of heaven rendered in his medium of choice, washable markers. To what shall we liken the kingdom of heaven? Heaven (or, as the stylized swirly writing in the upper right corner has it, “heven”) is a kind of castle city.

There are angels everywhere: I see two on the rooftop, two out on the balcony, and at least one angel visible through each of the three windows. The little square window on the balcony is architecturally impossible, because it opens onto an interior space which couldn’t really be located there. The angel whose wingtip we see through that window couldn’t really fit in there. But this could be the artist’s attempt to communicate the fact that this castle city is not constrained by ordinary physical laws. There are spaces within spaces here, and they coexist in an absolute space governed more by the laws of Escher than of Newton. If this is the New Jerusalem, I’m not sure how John the Revelator is going to measure it.

The angels are happy. Their heads could be made from those smiley-face buttons. They are also simple, with no limbs visible except for their golden wings. They are all standing at attention and looking away to the right.

Inside the highest window is another figure, the only one facing toward the viewer’s left. This seated figure wearing a crown is, I am told, God. Everybody here seems busy and happy, whether they taking in the view from the balcony, or standing before the throne inside the castle. I have to say that this picture does not help me understand what they are all doing. But then again, I don’t really expect to understand it all. 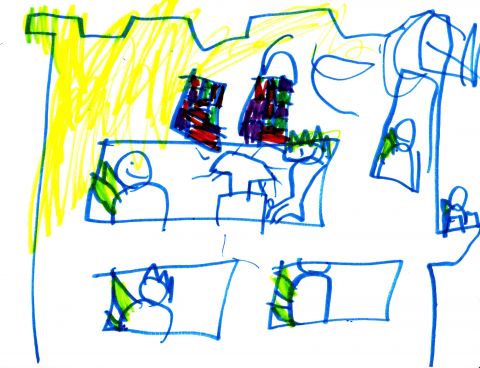 Here is another view of Castle City Heven. This is more of an establishing shot, letting us see the shape of the whole edifice. The balcony extends to the right, and only has one angel on it (perhaps reading? is that what they do in heaven? it does sound nice).

This image has some nice details clustered around the central window: 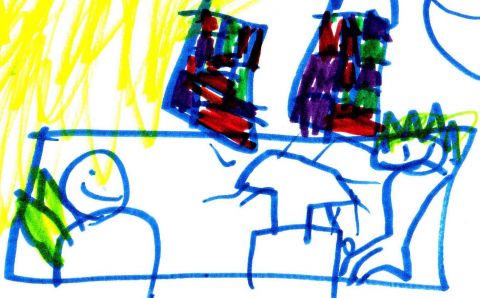 Once more we see God seated on a throne with an angel in front of him. But between them is an object which the artist describes as a lamp. “What lamp?” I ask. “God’s lamp,” is the response, delivered in a voice that makes me feel like I’m the silly one for asking. Whose else would it be, come to think of it? I suppose I was thrown off by the fact that it’s more of a Lamps Plus table-top fixture complete with a lampshade, when I was expecting, I don’t know, a menorah?

Above that compartment are two decorative windows of many colors: stained glass windows.